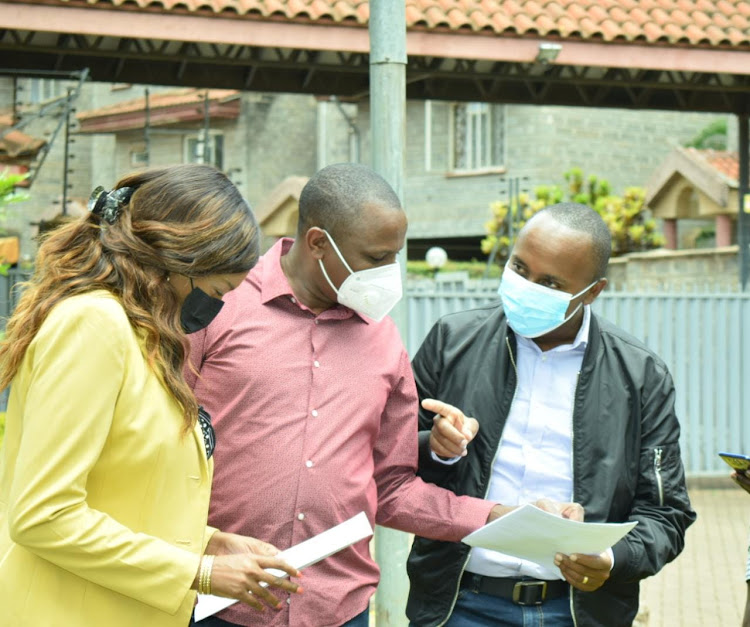 Nakuru Senator,Susan Kihika, Kikuyu Constituency MP Ichungwa Antony and Dagoretti South MPJohn Kiarie during a press briefing in Nairobi on April 5,2021. The three were making proposals to the President on relief measures for people affected by the lockdown in the five counties.
Image: MARGARET WANJIRU

Some MPs allied to Tangatanga have asked President Uhuru Kenyatta to introduce a raft of reliefs to cushion Kenyans from the Covid-19 pandemic.

Three legislators allied to Deputy President William Ruto said the relief measures should target at least 4 million households in the five counties currently under a second lock down.

“The people in the affected counties are not just generators of government revenue. They also directly support the lives of millions of Kenyans across the country,” said Kihika.

As part of the measures, the three lawmakers want the President to allocate funds to supports hotels, market vendors, matatus and boda boda operators and bars.

They said the government should allocate at least Sh14 billion that would have been used for the referendum to give stipends of Sh3,500 per month to four million households.

According to the Tangatanga MPs, Sh50 billion should be reallocated from the Defence and Interior ministries budgets to facilitate mass testing of Kenyans.

On March 26, Uhuru ordered the cessation of movement into and out of the capital Nairobi and four other counties following a surge in the number of Covid-19 cases.

Kenyans were prohibited from moving into and out of Nairobi, Kajiado, Machakos, Kiambu and Nakuru counties.

The President had also ordered a revision of curfew hours for the five counties to 8pm-4am. The rest of the country continues to observe the 10pm to 4am timing.

Addressing the press on Monday in Nairobi, Kihika said it is the responsibility of the government to protect the lives and health care of the people but also “protect and defend their livelihoods and their very dignity as human beings.”

The three legislators made several proposals to the Head-of-State on how he would address the economic challenges facing residents of the five counties.

They asked the President to set up a “Lifeline Fund” that will offer food rations to a minimum of four million Kenyans in the five counties.

“This way, the most vulnerable of our people will be able to access food for their families even without the tax breaks and therefore rescuing their dignity as human beings” said Kihika.

“Here we want to propose suspension of loan interests for those servicing loans and a moratorium on principal repayment for a period of at least six months,” he said.

He further proposed roll out of mandatory mass testing and vaccination campaign in the five regions.

Ichung'wa proposed the President spends not less than Sh14 billion that would have been used for the referendum to give stipends of Sh3,500 per month to four million households.

“To finance mass testing, we propose you reallocate Sh50 billion from the defence budget and that of the ministry of Interior since greatest security threat at the moment is the pandemic,” he advised.

He further proposed a tax relief for banks and other financial institutions “that will waive such interest to the affected businesses in their 2020/2021 tax returns with the support of the recently procured IMF loan.”

Kihika added that it is their prayer that the government, in formulating measures that will mitigate economic impact of the second lockdown, will factor some if not all the proposals they made.