Beatrice to wait a week for test results on 3kg tumour

Doctors analysing chest and head scans before determining next steps

• She is admitted at the hospital’s private wing, and the County Government of Bungoma had promised to defray costs incurred at the family.

• You can send your donations to M-Pesa Paybill number 922379, under the account name The Star. 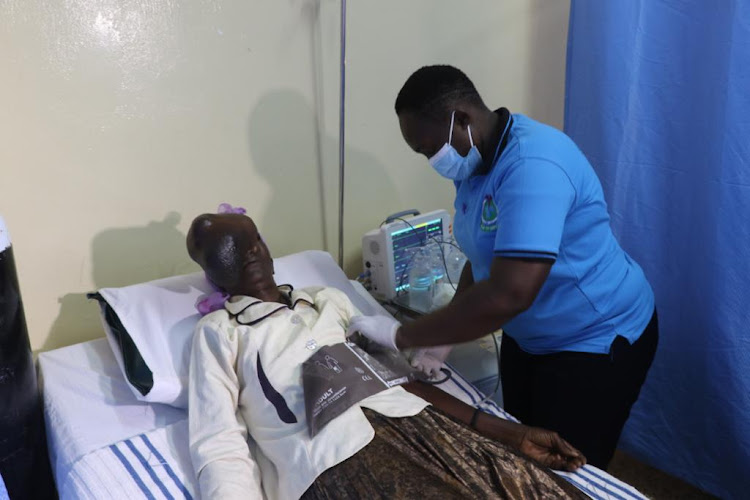 HELP: A nurse prepares Beatrice Makokha for her tests at the Bungoma Level 5 Hospital on Sunday.
Image: Handout

Doctors have asked Beatrice Makokha to wait another one week as they analyse the results of tests carried on her on Sunday.

Beatrice is the 50-year-old woman from Bungoma battling a rapidly growing tumour that has constricted her right nostrils and covered her right eye.

The tests include a CT scan and MRI to reveal the extent of the three-kg mass that has been growing on her face for 20 years.

“Others are blood tests and a chest scan, histology, cytology and biopsy. Within one week we shall be able to decide her on the next steps,” said one doctor at the Bungoma Level 5 Hospital.

Beatrice told the Star she is admitted to the hospital’s private wing and Bungoma county had promised to pay for costs incurred at the facility.

The Star newspaper has appealed to Kenyans to help raise funds for her, costs she is expected to incur, even after treatment.

You can send your donations to M-Pesa Paybill number 922379, under the account name The Star.

The Star has also made it clear all proceeds will be directed entirely to Beatrice Makokha's medical bills and care.

Her eldest daughter, Namalwa Jenty, said after the scans on Saturday, she received some tablets and an injection.

“After that she slept until today (Monday) 11am. So we are now waiting for the doctors to tell us what to do,” she said.

Beatrice's breathing remains laboured and medics at the Bungoma Level 5 Hospital said she does not have long to live if the tumour is not removed urgently.

She is her family's sole breadwinner. 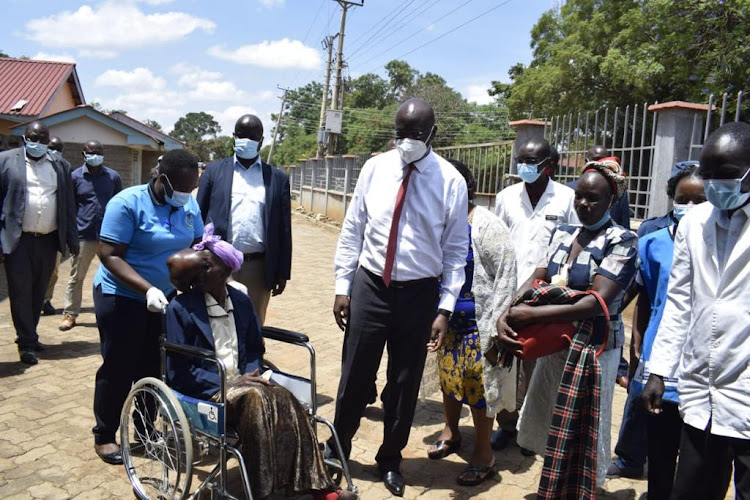 On Sunday morning, Bungoma Governor Wycliffe Wangamati visited Makokha at her home in Stabicha in Kimilili.

He accompanied her to the hospital for the tests, whose costs he promised would be covered by the county.

The tests will determine the specialist treatment and surgery she will require.

"I wish to thank the Star Newspaper for highlighting the story of Mama Beatrice. I have spoken to the management of MTRH Eldoret in readiness for her admission should findings at the County Referral Hospital require so. We've registered her on NHIF to ease the burden of healthcare," the governor said.

The Eldoret-based Moi Teaching and Referral Hospital confirmed it was ready to take up the case and would do the surgery at no cost.

“The hospital has decided if Beatrice is admitted here, her surgery or treatment will be done at no cost to her,” public relations officer Consolate Chepchirchir said.

However, she will accrue other surgery-related and long-term post-operative care costs not covered by the waiver.

Beatrice face began swelling 21 years ago in January 2000 accompanied by a sharp pain that would not go away.

After that [tests] she slept until today (Monday) 11am. So we are now waiting for the doctors to tell us what to do

When the swelling persisted, she went to Kitale Referral Hospital. Doctors found no problem with the eye and advised her to take painkillers.

"The scan showed nothing was wrong with my eye and head, so the doctors prescribed painkillers for the perceived migraine,” she said.

Makokha did not go to MTRH. She said she didn't have the money.

Makokha gave birth to 14 children, eight of them have died.

Makokha is appealing for financial help for surgery. She takes painkillers.