Why you should take Covid-19 vaccine

If the vaccine boosts the immunity against Covid-19 then it is worth the risk, which is rare and small.

• Those for it argue that it is impossible for governments around the world to collectively choose to harm their citizens.

• Those against the vaccine say it’s a conspiracy to depopulate the world, to introduce sterility in targeted parts of the world. 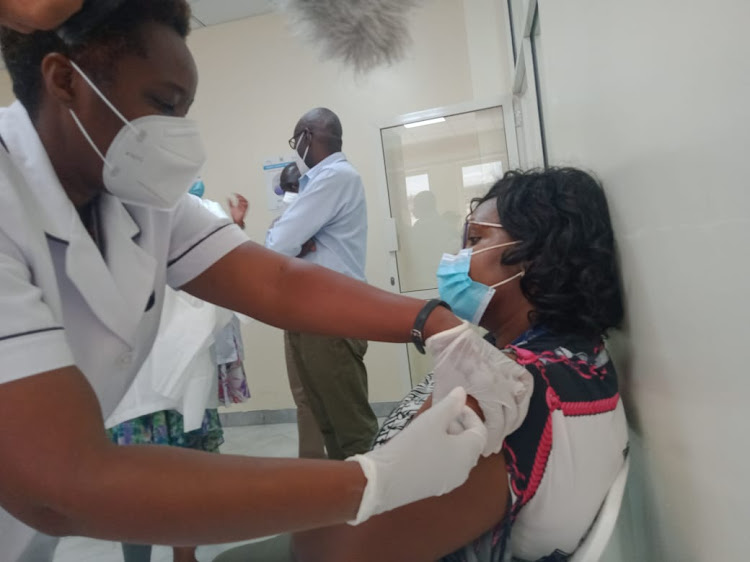 THE JAB: Jerusha Malini, a nurse at KNH, is vaccinated against Covid-19 on March 5.
Image: FREDRICK OMONDI

Kenyans all over are asking themselves about the Covid-19 vaccine. Myths and fables are being told all over in support and against the vaccine.

Those for it argue that it is impossible for governments around the world to collectively choose to harm their citizens.

This would be too big a conspiracy to believe. So, they argue the vaccine is for the good of the people.

Those against the vaccine say it’s a conspiracy to depopulate the world, to introduce sterility in targeted parts of the world. So, they say people should not be fooled into taking the jab.

This week, Kenya received its second batch of the vaccine. Even as people argue about the merits and demerits of getting the jab, questions are being asked about the distribution plan of the vaccine.

The initial plan was to prioritise the frontline workers who include doctors, nurses, teachers as well as security officials such as the police and defence forces.

However, a few days down the line, Kenyans have witnessed politicians and other non-frontline persons presenting themselves to receive the jab. So the question is, how did the politicians become frontline workers?

As Kenyans ponder this selfishness, it is also worth noting that the frontline workers are not showing up to take the vaccine.

In Mombasa, for example, two weeks after the rollout of the vaccine, only five police officers out of hundreds presented themselves to get the jab.

The numbers were also low for teachers and surprisingly nurses and doctors too.

One would imagine being in the medical field the nurses and doctors understand medicine and so would rush to be vaccinated.

However, that is not the case in Kenya. This has made many citizens more sceptical about the jab.

While the debate rages on about the frontline workers and politicians, there are reports of other Kenyans going out of their way to look for the vaccines.

Media reports indicate certain hospitals in the country are offering the jab, some free of charge and others at a cost. If social media is to be believed, there is also the option of having the jab administered privately, if one can afford the service.

Available also in the country apparently are all the three known vaccines – AstraZeneca from the UK, Pfizer from the US and Sputnik V from Russia.

More importantly, however, is the question of affordability and accessibility to Kenyans, including those living in informal settlements.

While so far taking of the jab is voluntary and cannot be forced on anyone, there are some who are arguing it is for public good — and not only personal — so it should be forced on everyone.

They contend that those not vaccinated could not only endanger their lives and put a strain on public health but also spread the disease further as a result of their weak immune system.

So, if the vaccine is to truly work on the entire population, it must be made available to all and sundry.

What remains to be a fact is that vaccines the world over have been administered to populations for centuries.

Every living human being at the moment has one or another form of the vaccine in their bodies.

If there was a conspiracy to depopulate mooted collectively by governments the world over, they could easily use any of these already existing vaccines to do that.

While it is true there are a few known cases of adverse effects of the vaccines on certain individuals, it is also true that to over 99 per cent of those vaccinated, it has not had major effects on their health. At least so far we know that to be the case. The jury is still out on the future.

[The rare blood clots in the brain have not been proven to be linked to a vaccine.]

If the vaccine boosts the immunity against Covid-19, as we are told by scientists, doctors and governments the world over, then it is worth the risk.

Many people continue to die from the pandemic. If there is a way to help save lives, it should certainly be considered. Kenyans should thus go ahead and take the vaccine.