• Raila hailed his departed friend as having uplifted the stature of Tanzania in the region and among the community of nations.

• Magufuli and VP Suluhu were just five months into their second term after their re-election. 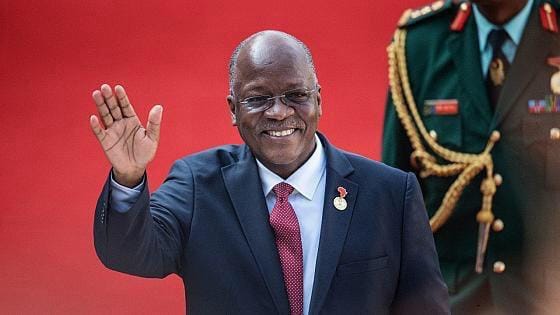 ODM leader Raila Odinga has led other politicians from across the political divide to mourn Tanzanian President John Pombe Magufuli.

Raila in his tribute described Magufuli as a family friend who has been on his side at “most difficult and painful moments.”

The ODM leader Raila called for a peaceful transfer of power following the demise of the Tanzanian leader.

Raila said the tradition of peaceful and orderly transfer of power needs to hold in Tanzania “now more than ever in the interest of the peaceful and friendly people of Tanzania, the East Africa Community, and the Continent of Africa.”

“At this moment of sorrow, I call on the Tanzanian nation to remain united and peaceful,” the ODM leader said in a statement on Thursday.

“I appeal to the nation to fall back to the tradition set by Mwalimu Nyerere and followed meticulously by predecessors of a peaceful, orderly, and constitutional transfer of power.”

The African Union envoy for Infrastructure said he learned of his compatriot’s death with deep sadness.

Raila and Magufuli have been close friends, attending their respective families’ functions.

The ODM leader said they also worked together on infrastructure projects for seamless connectivity of the East African states.

“On behalf of my family and the Orange Democratic Movement, I send our deep condolences to President Magufuli’s family and the people of the United Republic of Tanzania at this profoundly difficult and sad time.”

I have, with great sadness, learnt of the death of His Excellency John Pombe Magufuli. He was a pragmatic leader who believed in and worked for the economic empowerment of East Africans. We join Tanzania in mourning the passing of a great son of Africa. May his soul rest in peace pic.twitter.com/bzm188cKgF

Raila hailed his departed friend as having uplifted the stature of Tanzania in the region and among the community of nations.

I'm sorry to hear that @MagufuliJP, President of Tanzania, has passed away. My thoughts are with his loved ones and the people of Tanzania.

Hassan said that Magufuli was hospitalised on March 6 at the Jakaya Kikwete Cardiac Institute and died at Mzena State Hospital in Dar es Salaam.

This brings an end to weeks of speculations regarding his whereabouts and health.

It had been said that Magufuli was admitted to the Nairobi hospital before he was flown back to Dar where he died.

There has been speculation on Magufuli's whereabouts with suspicion of Covid-19 infection.
News
4 months ago

Magufuli and VP Suluhu were just five months into their second term after their re-election.

Amani National leader Musalia Mudavadi said, “It is with deep sorrow that I have learnt of the passing on of President John Pombe Magufuli of the Republic of Tanzania. I stand in solidarity with the people of Tanzania during this trying moment”.

Mudavadi said may their constitution guide them through a smooth transition as they celebrate his legacy anchored on the war against corruption and strengthening of the economy.

Former Vice President and Wiper leader Kalonzo Musyoka said his prayers go out to all Tanzanians during this difficult time.

President John Magufuli was an icon to the people of Tanzania and the region at large.He believed in hard work .I am shocked and saddened by the news of his death. My condolences to H.E Janet Magufuli, family and the people of Tanzania. Africa has lost a great son. pic.twitter.com/CLfHuZTQ6y

“My condolences to the family, friends and to the entire United Republic of Tanzania following the passing-on of President John Pombe Magufuli. My prayers are with all of you during this difficult time. May he Rest in Peace,” he said.

“We mourn the death of His Excellency John Magufuli. He was a distinguished statesman and his death is a loss to the integration of the East African Community. My condolences to his family and the people of Tanzania,” Bungoma Senator and Ford-K leader Moses Wetangula said.

I have learnt with utter shock of the demise of the President of the United Republic of Tanzania, H.E John Joseph Pombe Maghufuli following a heart disease bravely endured for 10 year. President Maghufuli was a beaming pillar of leadership and hope to tanzanians. #ripmagufuli pic.twitter.com/WSQjoy5xTU

Mombasa Governor Hassan Joho said, “The people of Mombasa join our brothers and sisters of the United Republic of Tanzania in mourning the death of their beloved President Dr John Pombe Joseph Magufuli. May the Almighty assuage your grief and May He also rest his soul in eternal peace. Ameen”.

MP David Osiany said, “HE John Pombe Magufuli takes a bow. My heart goes out to the family that has lost a husband and father, as well as Tanzanians for the loss of their President. Hated and loved in equal measure, JP like all humans had great strengths and flaws alike. Lost at the prime of 61”.

The Council of Governors Chairperson Martin Wambora said the council share in the grief and join Tanzanians in celebrating the life of an exemplary leader.

“On behalf of the Council of Governors and the 47 County Governments, I would like to convey our heartfelt condolences to the People of the United Republic of Tanzania following the death of H.E President John Pombe Magufuli. Our thoughts and prayers go out to his family, his relatives and the people of Tanzania who he served with diligence and devotion. We share in your grief and join you in celebrating the life of an exemplary leader. He will be remembered as a strict administrator who advocated for the rule of law in his Country. May the Almighty rest his soul in eternal peace,” Wambora said.

Baringo Senator and KANU national chairman Gideon Moi said Magufuli was a towering East African leader with a solid transformational agenda for Tanzania as evidenced during his tenure in public service.

Samia Hassan Suluhu became the first female vice-president when Magufuli was elected in 2015.
News
4 months ago

“His track record was hallmarked by dedication, conviction, and the urge for service delivery to the public. As the president, Magufuli embarked on a comprehensive reform agenda to rid Tanzania of corruption and complacency, and bequeath it a visionary and servant leadership. In his capacity as a Minister for Works, he oversaw an intensive road network expansion program to open up Tanzania, encourage trade and spur economic growth,” the Senator said.

Moi said when Magufuli rose to become a Member of Parliament under CCM in 1995, he had campaigned on a platform of decency, honesty, and integrity. These are fundamental values that we also hold dear.

“A strict disciplinarian as a teacher, Magufuli earned the second highest academic conferment to become a Doctor in Industrial Chemistry, thus reaffirming the central place of education in our society,” he said.

Moi said Magufuli’s  vast knowledge and experience transcended the borders of the East African Community, benefitting even the Southern African Development Community when he was the Chairperson.

“We will continue to cherish his memory and contribution as a region. Therefore, I extend my sincere condolences to the family, friends, and the people of Tanzania for losing their respected Head of State. We share in this grief and it is my prayer that God grants them the fortitude to bear this devastating loss because to Him we belong and to Him we shall return,” he said.

Nandalwe Foundation CEO Moses Nandalwe sent a message of comfort to friends, relatives and the people of Tanzania for the passing on of their Head of state.

".. the diseased was an exemplary head of state and no nonsense Icon not only in Tanzania but also in the east Africa community," he said.

"We mourn with you and join you in celebrating the extraordinary life and career of President John Magufuli. "

He called upon the Tanzania nation to remain United and peaceful.

"I appeal to the nation to fall back to the traditions set by Julius Nyerere and followed meticulously by predecessors of a peaceful, orderly and constitutional transfer of power," he said.

He kept his ministers and contractors on their toes earning the nickname 'bulldozer'.
News
4 months ago
by PATRICK VIDIJA and MOSES ODHIAMBO
News
18 March 2021 - 09:46