EAC and Kenyan flags to be flown half-mast till the day of Magufuli's funeral.

• Uhuru said the flags of the East African Community and Kenya's national flag be flown at half-mast throughout Kenya and all diplomatic missions abroad from today until the sunset on the day of Magufuli's funeral.

• President says Magufuli was a champion of Pan-Africanism and that he had lost a friend and an ally. 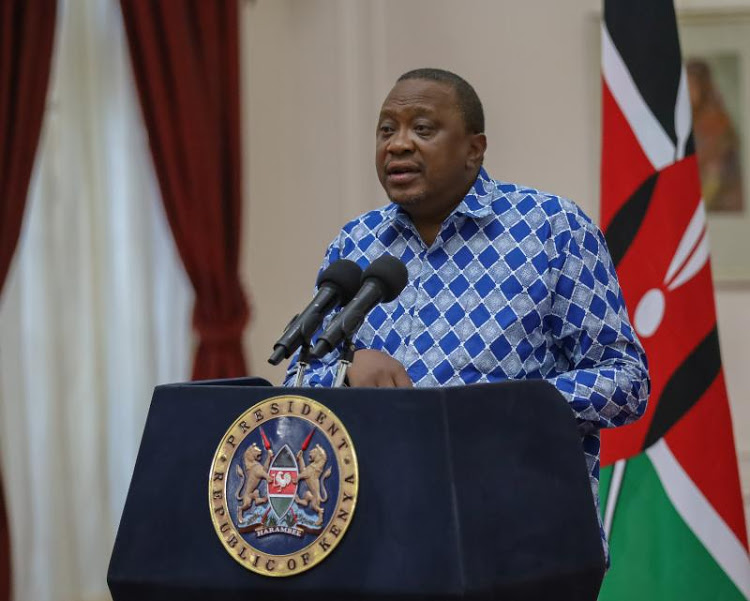 President Uhuru Kenyatta has directed that Kenya will observe a seven-day period of national mourning in honour of the late Tanzania President John Magufuli.

Addressing the nation from State House on Thursday, Uhuru said the flags of the East African Community and Kenya's national flag be flown at half-mast throughout Kenya and all diplomatic missions abroad from today until the sunset on the day of Magufuli's funeral.

"Magufuli was a champion of Pan-Africanism. I have lost a friend and  an ally. Africa  and the world has lost a leader who steered the EAC and the continent," he said.

"On behalf of the government and people of Kenya I convey our sincere condolences to the First Lady of Tanzania, Janet Magufuli."

Uhuru said the world has indeed, lost an illustrious leader; whose vision, passion, and immense leadership propelled the Nation of Tanzania forward.

"..and also steered the East African Community to closer integration and cooperation,"he said.

The late Magufuli was well known by the locals and across the borders for his hard stance when it comes to developments and service to the people.

Until his demise on Wednesday night, Magufuli was serving his second term in office as the fifth President of Tanzania.

He died at the age of 61 after a long battle with heart disease, according to Tanzanian Vice President Samia Suluhu.

After hours of frenzied social media speculation on whether Magufuli had been admitted to the Nairobi Hospital with Covid-19, the government on March 10 put out a statement saying he was not in Kenya.

In a brief one-word statement, Foreign Affairs Principal Secretary Macharia Kamau told the Star "No". This was after he was asked to confirm if Magufuli was admitted to the top city hospital.

Magufuli, who has in the past year proclaimed there was no Covid in Tanzania, had been rumoured to have been struck by the virus and flown to Nairobi on March 8 via an Amref Flying Doctors service.

In Tanzania, authorities kept a studious silence, sparking off talk of Magufuli's whereabouts.

Magufuli, 61, had last been seen in public on February 24 during a tour of the commercial hub, Dar es Salaam, where he inspected projects and addressed public gatherings.

Magufuli kicked off his political ambition in 1995 when he won the Parliamentary seat for Chato, a seat which he defended in 2000 and 2005.