Matungu made but also dashed political dreams and careers

• Smarting from the Matungu defeat, ODM had another concocted allegation that the OP was scheming to manage the Uhuru succession at the expense of Raila Odinga.

• The ODM threat to return to bedlam and anarchy was daring in its revelation that the handshake was shaky. 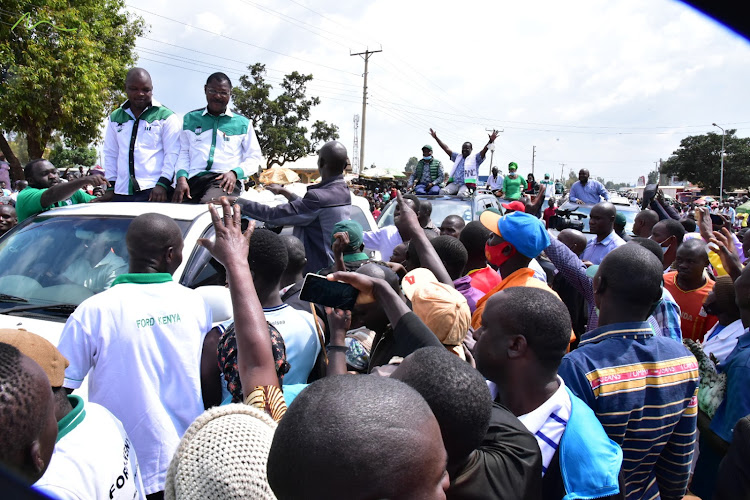 ANC and Ford K leaders Musalia Mudavadi and Moses Wetang'ula during campaigns for their candidates in the Matungu, Kabuchai by-elections on January 18, 2021
Image: MUSALIA MUDAVADI/TWITTER

The altercations in the aftermath of the Matungu and Kabuchai by-elections last week have taken on a life of their own.

There are those facing court charges for silly infringements and others waiting in the corridors of the National Cohesion and Integration Commission for questioning.

While Kabuchai has been relatively quiet, the outcome of Matungu shook the political ground with accusations flying all over.

The first casualty is that the BBI process and the handshake came under severe test last weekend when ODM threw tantrums about ‘betrayal’ ostensibly by President Uhuru Kenyatta.

They accused the Office of the President of plotting to sideline them from the referendum's last leg of the BBI process.

Here, it was more the fear of being removed from controlling the referendum largesse they’ve controlled, than a legitimate concern that the process was being sabotaged from within the OP.

Smarting from the Matungu defeat, ODM had another concocted allegation that the OP was scheming to manage the Uhuru succession at the expense of Raila Odinga.

This was quite revealing because ODM has incessantly insisted that Raila wasn’t seeking Uhuru’s endorsement while berating opponents for seeking the same.

However, why they would whine about it at all concealed other simmering fears.

The party had invested heavily in winning Matungu to prop up the narrative by its leader that he has political sway over Luhyaland.

Related to this was its ambition to prop up Kakamega Governor Wycliffe Oparanya as the Raila side-kick kingpin of the region at the expense of ANC leader Musalia Mudavadi.

But all the investment came a cropper when they lost to and left Mudavadi with bragging rights. It meant the myth that Raila is the supremo uno of Luhyaland was shattered, and with it downgrading of Oparanya as a mere wannabe.

Irritated by the outcome, the party resorted to manufacturing creative narratives to conceal their shame.

The OP was again the scapegoat while Mudavadi the pawn. It was then incredibly claimed that the OP aided the Mudavadi win in Matungu.

This lent credence to their other claims that Mudavadi was the favoured Uhuru successor by the inner sanctum of government.

They went to great pains to paint a picture of failed 'state' succession projects beginning with the plot to prevent former President Moi from succeeding Jomo Kenyatta in the late 1970s; Moi’s own failed 'Uhuru project' in 2002 and an assumed preference by former President Mwai Kibaki for Mudavadi in 2013.

But what pundits wondered is why the party was so pained by an endorsement they claimed they didn’t need. In reality, ODM was playing at double standards; fearing their covert coveting of an endorsement of Raila by Uhuru through BBI had come a cropper and hence the hullaballoo.

Former Kakamega Senator Boni Khakwale summed it up for all when he said ODM leaders had become jittery after realising Uhuru would not endorse their party leader.

“It has now dawned on Sifuna (ODM secretary-general) and the company that what they expected from the handshake, that is, to deliver Raila to State House, might not happen. This is why you hear all the noise,” he said.

But ANC chairman Kelvin Lunani put it more elegantly that “ODM should openly declare it covets the endorsement that Mudavadi presumably beat them too.

It is therefore a ridiculous prank for a party that repeatedly denounces political endorsements to lament the assumed support garnered by our party leader. Denials to the contrary are pure deceit,” he said.

ODM had not only whined about alleged state interference in the Matungu by-election, but it also mourned the feared isolation of its leader from the 2022 succession and sidelining from the centre of BBI referendum.

And it did the inevitable; because of bruised egos, it called a rally in Raila’s stomping grounds of Kibra at the Kamukunji Grounds but this backfired following an alleged phone call to him from State House.

“One may wonder whether President Kenyatta’s intervention came with goodies accompanied by a veiled threat. Raila’s silence speaks volumes,” pundit Javis Bigambo said of Uhuru’s alleged call to the ODM leader over the Sunday rally.

A party that is losing confidence in itself is viewed in the manner it handles crises. It can externalise the crisis of confidence within itself or internalise it, both of which mean attrition.

The Kibra meeting had been billed to throw tantrums and threaten to scuttle the BBI referendum.

But with Raila as a no-show, the rally morphed into internal cannibalisation.

Wannabe presidential aspirants to the ODM ticket were crudely warned off.

Deputy Party leaders Hassan Joho and Wycliffe Oparanya both doing their last terms as governors of Mombasa and Kakamega, respectively, were told the party ticket is reserved for its owner - Raila Odinga.

It’ll be quite a surprise if a clause designating party leader as the only one qualified to vie isn’t re-introduced in the ODM constitution.

Meanwhile, it’s quite harrowing for Oparanya to be told he had no stake in ODM yet he had hinged his hopes on winning Matungu to qualify sitting at the national table.

He was instead walloped by Mudavadi. Now the party where he’s second in command has virtually disowned him.

He should rewind to the Mudavadi ouster from the ODM race of 2012.

That apart, the chilling threat by Raila’s sounding boards Senator James Orengo and Radieda MP Otiende Amollo that they would torpedo BBI and return to the pre-2018 handshake chaos spoke loudly about a handshake stitched together on ransom stilts.

The threat to return to bedlam and anarchy was daring in its revelation that the handshake was shaky.

“The threat by ODM to cause chaos and anarchy if their greed for BBI largesse is not met demonstrates the insatiable thirst by a party determined to dismember the country,” read a statement by ANC chairman Kelvin Lunani.

And for the first time, the country got a glimpse of why Raila thinks he’s indispensable to Uhuru, or rather, that Uhuru is beholden to him.

But if Raila is indispensable to Uhuru, why the desperate outcry by Raila’s lieutenants that his 2022 presidential run was being undermined? This public display of arrogance could further dent the relationship between the two.

National Assembly Majority leader Amos Kimunya added a teaser that talk of Raila or his allies being frustrated is “machinations by people who have lost heavily in terms of the counties passing the BBI.

They are now planting insinuations to rub ODM the wrong way. Unfortunately, some people within ODM may have swallowed the bait." Could Oburu Oginga, Junet Mohamed, James Orengo and Otiende Amollo have spoken too soon?

No excuse given except the uncontested social media claims that the cancellation followed the ODM leader being unwell and the absence of Wiper leader Kalonzo Musyoka on a trip to the DRC.

But the convenient justification was the visiting Ethiopian President Sahle-Work Zewde, who was hosted at State House by Uhuru on the same Tuesday.

Yet that can’t really crowd out such an important meeting. It is plausible Uhuru wants by-election jitters to peter out first before the leaders can have the courage to face each other.

For Raila, it’s been quite a season he would rather forget. Revolt from bastions that have been loyal for 30 years foreshadows trouble.

Dogged by the lashing in Turkana by Governor Josphat Nanok, he would be humiliated in the loss of the Msambweni seat to an ally of Deputy President William Ruto, only for Kilifi Governor Amason Kingi, his staunchest soldier at the Coast to harangue him and state he was leaving the Orange party.

Then the Matungu fiasco all but revealed how feeble Raila’s famed hold on the Luhya has been.

Matungu affirmed Mudavadi as the Western region’s kingpin. And the element of collateral damage wrought by the Matungu loss could spark massive desertion if it occurs to Joho and Oparanya that the Kibra aggravation was sanctioned by Raila.