Boda boda madness report reveals any crime you can imagine

It's not just crazy riding, it's assault, robbery with violence, DWI , drugs abuse and trafficking and even murder

• Serious crimes were exposed, including robbery with violence, drugs trafficking, even murder 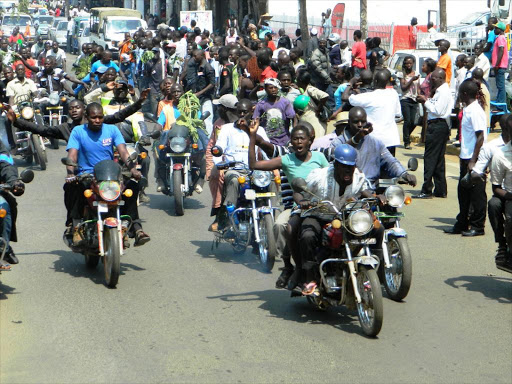 Boda bodas may be convenient, but they're also a grave danger on the roads and quite a few riders are involved in robbery with violence, drugs trafficking, even murder.

If there's a crime you can think of, boda boda riders have done it. And they, too, are crime victims.

Most numbers came from police records.

“Boda bodas are increasingly a very popular and entrenched means of transport. However, there are worrying concerns  the subsector is increasingly associated with crimes, traffic accidents and impunity with grave implications for public safety,” the report reads.

The aim was to establish the extent of boda boda-related crime, root causes, perpetrators, mode of operations and consequences. It aimed to identify existing control measures, their effectiveness in reducing crime and make recommendations.

In 2018, researchers reported that boda boda riders were involved in 2,359 accidents, 1,187  robberies and stealing, involved in 83 lynch mobs. They fought and  breached public order amongst themselves 49 times, played loud music near a school compound 18 times and transported weapons eight times.

The research indicated 17 incidents in which the pillions on boda bodas were raped by the riders, 24 riders were involved in drug trafficking, 16 in corruption and bribery, 11 in incitement and political interference, 27 were involved in defilement, 12 in trafficking illegal goods and there were 16 cases of harassment of police.

The research established 88 per cent said the operators commit crime in their locality.

Some 254 cases of burglary were reported, 97 rape, 47 sodomy cases, 35 bribery and 13 intimidation and harassment by the security agencies.

The main causes of boda boda-related crimes include unemployment and idleness, poverty, drug and substance abuse, non regulation of the sector, greed and desire for quick money and weak law enforcement.

The victims of the crimes committed by the riders include the riders employed as casuals, riders who have hired the motorcycles, pillions, the public, owners of the motorcycles, traffic police officers, government officials, matatu drivers, revenue officials and politicians.

The study found crimes are likely to be committed on Fridays, Saturdays and Sundays. The fourth week of the month and mid-month are high crime periods.

Public holidays, December, April, August and January are the most dangerous times.

The report recommends the establishment of a database of all the operators in Kenya through mandatory registration, refresher training and testing and making the industry a formal sector.

It further wants the government to subsidise the cost of riders' training and establish specific training schools. It calls for implementation of the NTSA regulations issued in 2014, sensitising operators, addressing unemployment nd poverty and gathering more police intelligence to manage the industry.

The report also recommends that NTSA cracks down on violators, formulates by-laws to regulate county operations.