While handshake ended street protests, the BBI has put the country on a divisive campaign mode.

• The historic handshake between the two political nemeses President Uhuru Kenyatta and ODM leader Raila Odinga on March 9 was billed as the last bullet to slay the dragon of perennial ethnic animosities that often accompany presidential elections.

• Prior to this, elections in August 2017 were not an easy ride as it was marred by violence, rigging and rejection of the presidential results. 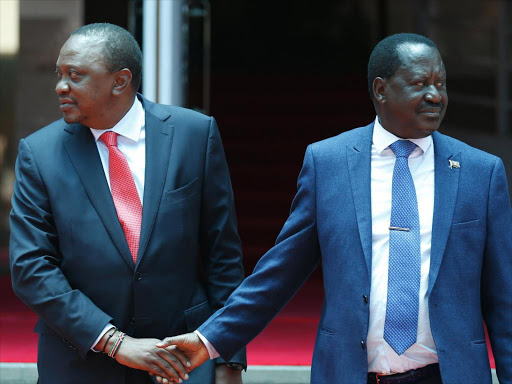 The Building Bridges Initiative was born on March 9, 2018, and as such, today will be a day to remember how the handshake salvaged Kenya.

The historic handshake between the two political nemeses - President Uhuru Kenyatta and ODM leader Raila Odinga - on March 9, 2018, was billed as the last bullet to slay the dragon of perennial ethnic animosities that often accompany presidential elections.

Prior to this, elections in August 2017 were not an easy ride as it was marred by violence, rigging and rejection of the presidential results.

The violence saw protesters clashing with police but some Kenyans feared it was starting to take on ethnic overtones. Over 66 people died in the overall election violence.

The Supreme Court nullified the August 8 vote saying that there were illegalities and irregularities in the election.

At the repeat elections to be carried out on October 26, Raila withdrew saying the IEBC had failed to institute reforms to forestall the kind of “illegalities and irregularities” that scuppered Uhuru’s victory in the August election.

But three years on, the handshake has caused wide divisions on the political scene with its brainchild - the Building Bridges Initiative - dividing leaders almost in the middle.

While the handshake ended street demonstrations by Opposition supporters, the BBI has put the country on a campaign mode with popularisation rallies across regions.

The Building Bridges Initiative made radical proposals to alter the structure of the executive and create several new offices, including that of a non-executive prime minister.

With over 24 county assemblies passing the Constitution of Kenya (Amendment) Bill, 2020, Kenyans will now have to go for a referendum before the 2022 polls, the BBI task force wants a premier to be picked by the President from MPs in the majority party in the National Assembly.

The 14-man team also wants the reintroduction of the office of the Official Opposition and a mixed Cabinet drawn from both parliamentarians and technocrats.

Inside the radical proposals of the BBI team

But it is these proposals that have brought enmity between leaders.

The Star established the handshake duo has directed the parliamentary leadership to pull out all the stops to ensure the Constitution of Kenya (Amendment) Bill 2020 is endorsed by more than two-thirds in both Houses.

The numerical strength of passage would send a message to Ruto and his  Tangatanga troops who have been claiming the BBI push has no grassroots support.

The looming numbers war in the National Assembly and the Senate is also meant to test Ruto's strength in both Houses of Parliament.

The planned showdown over a BBI vote comes when talk is rife of a possible impeachment motion against Ruto following his acrimonious falling-out with the President, his defiance and his hustler-wheelbarrow narrative.

ANC deputy party leader Ayub Savula has been the face of the clamour to kick out Ruto in what is believed to have the backing of the President's men.

The DP's confidants alleged that they were aware of a plan to render him jobless by assigning his roles to someone else.

Ruto stirred a storm when he alleged that, despite his contribution to Uhuru's victory in 2013 and 2017, a scheme was afoot to elbow him out of government.

"There are people plotting to push me out of the government. When we formed this government, President Kenyatta was with me or with the political con-men that are with him?” Ruto asked a charged crowd in Kabarnet

His remarks came just a week after the President dared him to leave the government if he is dissatisfied.

On the other hand,  the Deputy President and Raila have been locked in a ferocious war over the proposed constitutional changes that will shape the 2022 presidential contest.

The BBI referendum is tentatively scheduled for June, about 13 months to the general election, and is turning out to be a double-edged sword that will make or break careers.

Whoever carries the day in the high-stakes referendum will likely have the upper hand and the much-needed momentum going into the campaigns for 2022.

The referendum is widely seen as an early contest between the two on who has more popular support to succeed Uhuru.

But the deputy president’s refusal to lead opposition to, or expressly support, the draft bill has left his opponents in a bind

This spat has been ongoing for a long time making the deputy president begin a narrative about hustlers against dynasties.

Ruto has been pushing the 'hustler' narrative where he says that every hustle matters and the government should deal with the issues affecting the ordinary citizen.

His allies have used this to push for his 2022 bid by branding his competitors including Raila and Baringo senator Gideon Moi as dynasties.

But President Uhuru Kenyatta threw jabs at his deputy over the 'hustler nation' narrative.

Speaking to Kikuyu stations, the President warned his Mt Kenya backyard that the 'hustler' narrative would set a dangerous precedence.

The Head of State said that there was no way that one can deal with the issues facing Kenyans by dividing them along the class lines.

Uhuru is known to retreat to his backyard either in person or on vernacular radio whenever he wants to directly address that constituency.

Uhuru revisited his recent comments in Vihiga where he said he would use the same anti-dynasty logic to says that Kenya had been led by two tribes and it was time for others to take over.

Murang’a Senator Irungu Kang’ata over the weekend said that the political romance between Uhuru and Raila is 'officially over'.

He spoke during a political event in his Central Kenya backyard.

“The handshake is almost over. I can tell you because I have been in politics for (a) long time. Whenever a small argument or mistrust enters into a political relationship, it can never be repaired. So the handshake is officially over," he said.

His claims come a day after Siaya Senator James Orengo said there was a cabal within government pushing for the Uhuru Succession agenda.

In a video seen by the Star, Orengo said it is unfortunate that the cabal comprising of civil servants is secretly plotting on who will take over in 2022.

According to Orengo, it is the same click of individuals who were behind former president Mwai Kibaki's succession plan.

"In this country, as President Uhuru Kenyatta and Raila Odinga are busy with the Building Bridges, there is a cabal inside government who are busy chatting the way how Kenya will be ruled after the 2022 election," Orengo said.

A new alliance allegedly preferred by the 'system' at the expense of Raila is at the centre of the unfolding disintegration of the handshake.

The Star has established that Raila's ODM party is bitterly protesting against political machinations by some of Uhuru's handlers to isolate their boss from the 2022 succession matrix.

There are jitters in Raila's camp that the former prime minister may be used by the President to amend the Constitution through the Building Bridges Initiative and then be isolated for another alliance in 2022.

Why Musalia-Gideon alliance is at the heart of handshake collapse

The trio of Musalia, Wetang'ula and Kalonzo worked together with Raila under the moribund Nasa coalition but they have regrouped and brought on board Gideon.

Raila allies now claim the strategy is to destabilise his most loyal support bases across the country including Western and Coast with the aim of projecting him as a weak candidate ahead of 2022.

Raila's men claim that the Matungu parliamentary contest, in which ODM squared it out with Musalia and Deputy President William Ruto, was bungled by the deep state in favour of ANC's Peter Nabulindo.