Roy Muriuki, a third-year Bachelor of Education student, was killed at night in his house in South Imenti, last Tuesday.

• He worked as a boda boda rider during holidays.

• His grandmother said he always returned home before 8.30pm. 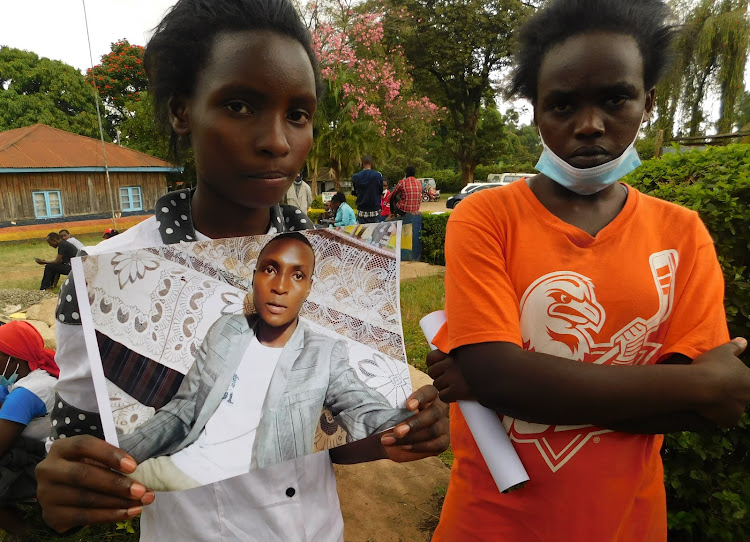 A university student killed in South Imenti will not be buried until his cold-blooded murderers are arrested and charged.

Roy Muriuki, a third-year Bachelor of Education student at Embu University, was killed at night in his house in Kithunguri, Mitunguu, last Tuesday.

He was to be buried Tuesday, but his family and Tutuma Muguru villagers Monday demanded the prosecution of his killers. They said they will not inter his remains before suspects are arraigned.

Last Wednesday, the area chief and DCI officers promised to get to the bottom of the matter, but residents ran out of patience. They held protests at the Nkubu police station.

Muriuki's sister, Linner Kagwira, said she was shocked to discover his body in a pool of blood.

“My brother was to go back to university this week. He was polite and had never reported any threats to his life from anyone," she said.

Responding to their pleas, Nkubu station boss Hassan Munyi promised thorough investigations even though the brutal murder was not carried out within his jurisdiction. He urged residents to provide crucial leads that will help them find the killers.

Imelda Kathure and Purity Gatwiri, Muriuki's former classmate and neighbour respectively, said he was stabbed to death and must have been struggling to defend himself. The motive of the murder has yet to be established. His body had stab wounds and nothing was stolen from his house.

As the protests proceeded, Muriuki's mother, Nkatha, was overseeing a postmortem at Nkubu Consolata Hospital mortuary.

His grandmother, Njema Kirigo, who was taking care of him and his sister, said Muriuki's father died when he was in Standard 2, while her sister was in nursery school.

She described him as an innocent and hard-working person. He worked as a boda boda rider during holidays. Kirigo said he always returned home before 8.30pm.

“His mother used to send their school fees and other necessary support to her children though she lived in Nairobi. On Tuesday, Roy was at home by 7.30pm, and I gave him kitchen keys.

"He gave me two cakes and one was for her sister. He took his food and went to his house. I don’t know if they hid in the house or what really happened because there were no screams. He had more than eight knife stab injuries," she said.