Venerable Haji takes many secrets to the grave

• As a powerful provincial administrator, Haji worked closely with  founding President Mzee Jomo Kenyatta and Daniel Moi between 1970 and 1997

• Haji's illustrious career as an administrator was also controversial and he was accused of fanning ethnic clashes, which he denied. . 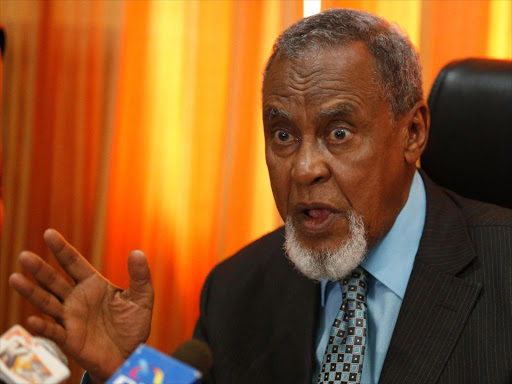 Soft-spoken Garissa Senator Mohamed Yusuf Haji was a firm provincial administrator-turned-politician who occupied the inner sanctums of power for 50 years.

Haji worked closely and in influential positions with the country’s four presidents and took many secrets to his grave.

He died at the Aga Khan Hospital in Nairobi on Monday. He was 80.

Haji was buried in the Muslim's section of Lang'ata Cemetery on Monday.

He was the father of the Director of Public Prosecutions Noordin Haji. He was also chairman of the Building Bridges Initiative and was serving his second term as Garissa senator.

For 27 consecutive years, Haji worked as a provincial administrator, first serving under Founding President Jomo Kenyatta and later Daniel Moi. This was between 1970 and 1997.

During this time, provincial administrators were very powerful, giving daily briefings directly to the president.

During his tenure in government, Haji was indicted by two separate and influential commissions of inquiry — the Akiwumi Commission and the Truth Justice and Reconciliation Commission for his alleged role in the ethnic clashes of 1989, 1992 and 1997.

Throughout his life, Haji maintained that his hands were clean.

Kibaki appointed him Minister of State for Defence after the December 2007 General Elections. He briefly served as acting Minister of Internal Security and Provincial affairs in 2012.

Haji's latest high-profile assignment was serving as chair of the Building Bridges Initiative  Taskforce, a role he was given by President Uhuru Kenyatta.

The task force travelled around the country, collecting views about a better Kenya.

“It is very unfortunate we have lost such a dependable, solid and highly accomplished Kenyan leader. Mzee Haji was a highly respected leader and elder whose wisdom, deep knowledge of Kenyan society and long experience as a public administrator enabled him to serve the country in various leadership roles with distinction for many years,” the President said.

The senator endeared himself and was respected by friend and foe alike and did not shy away from controversy.

He pushed for heavy government investments in the northern frontier areas in education and technical training.

Back home, Haji spearheaded peace and reconciliation missions during clan wars in northern Kenya. While serving as a provincial commissioner, President Moi used Haji's diplomatic skills to calm warring factions in other parts of the country.

Haji is further remembered for leading a Kenyan delegation that met with Transitional Federal Government of Somalia (TFG) officials in Mogadishu in October 2011 to discuss security.

Haji and Somali Minister of Defence Hussein Arab Isse then signed an agreement to collaborate against al Shabaab.

In June 2012, Haji signed another agreement under which Kenya deployed military forces in Somalia under the African Mission in Somalia (AMISOM).

Haji was indicted by both Akiwumi Commission and the Truth Justice and Reconciliation Commission (TJRC) for his alleged role in the ethnic clashes in 1989, 1992 and 1997.

The reports of the two commissions said Haji had no respect for human life and would do anything to appease the ruling Kanu party.

As Rift Valley Provincial Commissioner, Haji was accused of presiding over the eviction of non-Kalenjin and non-Maasai residents from the province.

The Akiwumi report said Haji ordered the eviction of non-Maasais from Lolgorian Division, Transmara in 1989.

In the clashes that hit Olenguruone in 1992, Haji and Nakuru District Commissioner Ishmael Chelang’a were accused of possibly fanning the clashes.

The report said the two advised clash victims to return to their farms on grounds that security had been improved.

Haji was also accused of failing to implement a plan that would have prevented tribal clashes in Njoro and Ol Moran areas in January 1998.

The Akiwumi Commission recommended Haji be investigated and prosecuted for his role in the clashes.

The TJRC also called for Haji to be investigated and possibly prosecuted.

It had spent almost four months collecting 40,000 statements from Kenyans countrywide on their grievances and sense of marginalisation.

After the report was released in May 2013, Uhuru gave a public commitment the TJRC report would be implemented during his presidency.

Haji was born on December 23, 1940, in Garissa District in the North Eastern Province to an ethnic Somali family. He hails from the Abdalla sub clan of the Ogaden Darod.

Haji joined the provincial administration in 1960 as a district officer and rose through the ranks to become one of the country’s most powerful provincial commissioners.

He entered the Kenya Institute of Administration in 1970 and 1971 studying advanced public administration. He travelled to the UK in 1981 when he studied for a diploma in management and financial control.

He retired from the provincial administration in 1998.

In that year he was nominated as a member of the Kenyan Parliament by Kanu.

From 1998 to 2001, Haji worked as an assistant minister in the Office of the President. In 2002, he was the Office's Minister of State for Cabinet Affairs.

In 2002, he was nominated to Parliament and in 2007, he was elected the MP for Ijara constituency on a Kanu ticket.

On June 18, 2012, Haji was appointed acting Minister of Internal Security and Provincial Affairs after the incumbent George Saitoti died in a helicopter crash a few days earlier. Haji had previously worked closely with Saitoti on the Linda Nchi military operation.

Describing Haji’s role in the BBI process, Uhuru said his death is a big blow to the country, especially in the constitutional reform process.

“Mzee Haji was a steward of the BBI process and a strong pillar of our desire to construct a cohesive, peaceful and more progressive Kenyan nation. His stewardship of the initiative shall be missed,” Uhuru said.

Haji had been flown in from Turkey on Saturday where he had been since December for treatment.

A family member said the senator died at Aga Khan Hospital, Nairobi at 5 am Monday.