• The Deputy President is understood to be eyeing Mt Kenya as a preferred region to produce his running mate.

• In recent weeks, Kiunjuri has stepped up his campaigns in support of the DP as the best man to succeed Uhuru. 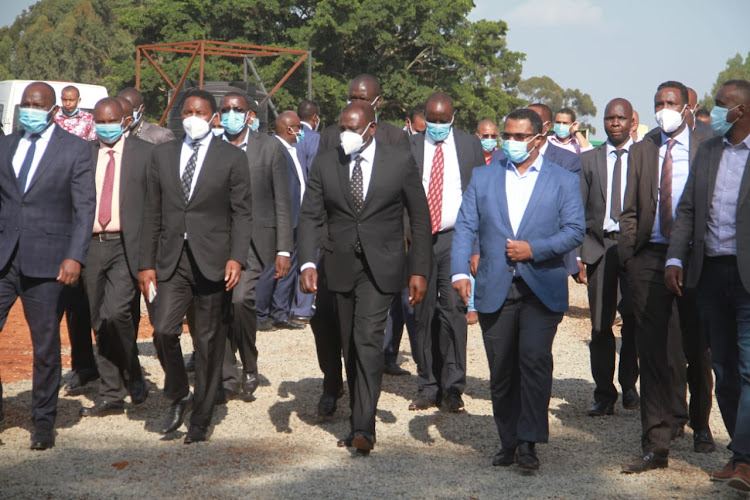 Deputy President William Ruto accompanied by Mwangi Kiunjuri and other leaders during the burial of Yusuf Haji on February 15, 2021.

The Service Party leader Mwangi Kiunjuri has upped his game to position himself as Deputy President William Ruto's running mate in next year's presidential race.

In recent weeks, the former Agriculture Cabinet Secretary has stepped up his campaigns in support of the DP as the best man to take over after President Uhuru Kenyatta's second and last term comes to an end.

The DP, however, finds himself in a fix, with MPs Moses Kuria (Gatundu South), Rigathi Gachagua (Mathira) and Tharaka Nithi Senator Kithure Kindiki also said to be eyeing the position.

Like Kiunjuri, Kuria, Kindiki and Gachagua have become leading lights in defence of the DP against the onslaught by allies of the President.

Kiunjuri is from Laikipia county, while Gachagua is from neighbouring Nyeri county—the home county of former President Mwai Kibaki.

Ruto is understood to be eyeing Mt Kenya as a preferred region to produce his running mate. Other regions are Western and Coast.

Political analyst Festus Irungu told the Star that Kiunjuru is best suited to pair with Ruto owing to his vast experience in politics and his acceptability across the Mt Kenya region.

Irungu, however, said Kiunjuri, who was kicked out of the Cabinet in January last year, should reach out to the other leaders and rally them behind him.

"Kiunjuri is definitely a front runner for the position owing to his long stay in politics and leadership. If he can talk to the rest of the leaders to support him, he is the most trusted leader among the youth and the elderly," he said.

In the early days of the Building Bridges Initiative in 2019 when he was still serving as CS, Kiunjuri organised Mt Kenya region leaders to take a position, leaving no doubt that he has some influence.

When the BBI team announced in October that they had completed compiling a report and it leaked out that they had recommended a change of government system from pure presidential to a parliamentary system, Kiunjuri drove to Parliament Buildings and mobilised Mt Kenya leaders for a meeting where they declared they would oppose such changes.

Weeks after the report was unveiled at the Bomas of Kenya, Kiunjuri also mobilised more than 57 MPs from Mt Kenya for a retreat in Embu.

On Sunday, Kiunjuri, who accompanied Ruto for a church fundraiser in Engineer, Nyandarua county, rooted for the DP to take care of the interests of the people of the region.

He termed it insincere for the President to go against his earlier promise to support the Deputy President once his term expires.

"Ruto is our candidate. He stood with the President and we shall also stand with him," he said.

Laikipia Senator John Kinyua told the Star on the phone that apart from Meru Governor Kiraitu Murungi—the senior-most politician from the region in terms of leadership—Kiunjuri comes second, hence that gives him leverage over the rest.

"I will stand on my earlier position that Kiunjuri is the right man to take over the leadership mantle from Uhuru as the leader of Mt Kenya. His ability to rally politicians from the region to take a common position is a clear indication of a unifying leader," he said.

"Kiunjuri brings about vast experience spanning over 25 years that few politicians have in Mt Kenya. His knack for the political language also sets him apart from the rest and in the coming days, we, the leadership of Mt Kenya, will sit down and settle on him to be our leader."

In a clear indication that he, too, is positioning himself to be Ruto's running mate, Kuria, who had also accompanied the DP to the Nyandarua harambee, said Uhuru should just finish his term and go. He has of late been traversing Mt Kenya positioning himself as the next kingpin.