PARTY POSITION OR NOT?

No end in sight to wrangles in troubled Jubilee house

• On Thursday, his assistant and Deputy President William Ruto’s de facto spokesperson Caleb Kositany said Jubilee MCAs are free to use their voices 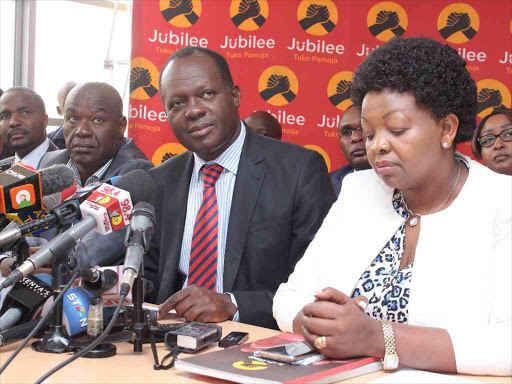 On Monday, Jubilee secretary-general and President Uhuru Kenyatta’s mouthpiece Raphael Tuju instructed MCAs to vote for the Bill as it was the party position to support it. He warned of disciplinary action against errant ward representatives.

“This letter is to confirm to you that the official party position on the BBI is that you support the bill when it comes to the County Assembly. The letter also invokes Article 13.3 (Part Fand G) and Article 19.3 of the Jubilee Constitution,” Tuju said.

On Thursday, his assistant and Deputy President William Ruto’s de facto spokesperson Caleb Kositany said Jubilee MCAs are free to use their voices.

Kositany said there was no meeting of the National Executive Committee to agree on a position on BBI as required by the party’s constitution.

“This is therefore to advise that in the absence of an official party position, any position as communicated by Tuju or anyone else is a personal position,” the Soy MP said.

“The threats enlisted in Tuju’s letter should be treated with utter contempt.”

Kositany termed Tuju’s directive as demeaning the intelligence of the MCAs.

Tuju had said that the BBI Bill has advantages especially to the MCAs and counties and which should form the basis for smooth sailing of the document.

“As members of the County Assembly, it is of note that the amended constitution will mean more resources (35 per cent) being assigned to the Counties. There will also be a Ward Fund that will empower the MCAs in every ward.”

The law change process requires the endorsement of the Bill in minimum 24 county assemblies to proceed to the next stage.

Siaya, Kisumu and Homa Bay — all from Raila’s turf have passed it.

Baringo county assembly, the first of Ruto’s bastions to consider it, rejected the Bill in acrimony on Friday.

MCAs had to be dispersed after the debate degenerated into a fistfight between Jubilee (the majority) and Kanu reps.

Ruto has been picking holes into the referendum drive being pushed by his boss Uhuru and former Prime Minister Raila.

The DP's camp has trashed the BBI proposals as creating a few top positions to assuage power hungry individuals but offering nothing to millions of poor Kenyans.