They include water, port, sanitation, stadium, road and school projects.

• CS Wamalwa says some of the projects have been possible because of the stability Kenya has enjoyed.

• Macharia says the expressway project is a testament to Kenya's ability to have more Build Operate and Transfer projects but regretted that his ministry is constrained by budgetary allocations. 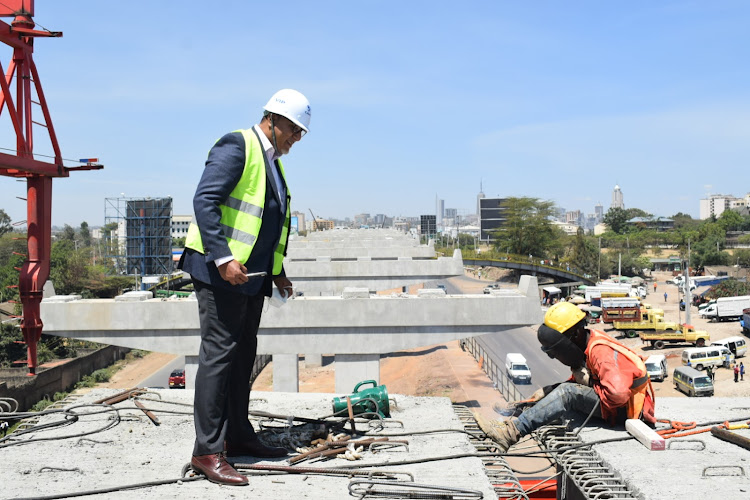 President Uhuru Kenyatta has deployed his Cabinet secretaries to ensure his legacy projects are completed before he leaves office.

Kenyatta, who has been on a working tour of Nyeri, is keen to have all the projects completed as a way of cementing the gains made during his reign. The head of state has been on a warpath with a section of politicians who have started early campaigns for next year's elections.

On Tuesday, he deployed CSs to the ground to inspect some of the flagship projects. In the morning, James Macharia (Transport), Najib Balala (Tourism), Eugene Wamalwa (Devolution) and Betty Maina (Industrialisation) toured those in Kibera.

They inspected the water supply and the progress made under sanitation initiatives. They also assessed measures taken to restore Nairobi River ecosystem's past glory.

The four CSs then proceeded to Mombasa Road where they inspected the ongoing expressway construction works. The contractor of the Sh62 billion project took them through a PowerPoint presentation of what they are doing.

"We have come here because we need to ensure this flagship project by the government is going on well. We have come to have a joint inspection by the Cabinet secretaries to confirm that what has been committed is indeed being achieved," Macharia said.

He said the expressway is the largest Build Operate Transfer project in Eastern and Central Africa.

"This is a major statement in terms of Kenya being favoured for foreign direct investment. By the time we finish this project, the contractor will have spent about Sh65 billion," he said.

Macharia said the project is a testament to the country's ability to have more Build Operate and Transfer projects but regretted that his ministry is constrained by budgetary allocations.

"We are also constrained in how much we can borrow. We do not want to keep on borrowing," he said.

Construction of the expressway was initially to take three years but the contractor has been urged to fast-track it.

"Kenyans want to start using this road as they take more than two hours from Jomo Kenyatta Airport all the way to the city," Macharia said.

The contractor has committed to completing it by December. Testing will take two months. Macharia anticipates that by February next year, the project will be open for private vehicles.

Wamalwa described the expressway as a crucial legacy project of the President. He said traffic jams have been a nightmare in the city.

"We will be spending 20 minutes between the CBD and the airport, instead of two hours. It will be a game-changer," he said, adding that it is not a joke for someone to spend billions on projects such as expressways.

"This is possible because of the stability Kenya has enjoyed and we want to urge our politicians if we can heed what the President has said. We still have 18 months to go before the next general election."

Wamalwa urged politicians to support the President and his agenda. He reiterated that with stability, the projects will be completed within the next 12 months. He said port construction in Kisumu, Mombasa, and Lamu needs stability to be completed.

"When the time for politics comes next year, we will do politics."

Wamalwa said politics needs to be managed and toned down so that investors are not scared away.

Balala, for his part, said the expressway will define Uhuru's legacy. "Sometimes we take things for granted and imagine it is not possible but it is possible."

He said the project will help promote tourism. Balala said the Big Four agenda is alive and the infrastructure is set to expand the Kenya's GDP.

The pair also inspected ongoing construction of the Sh17 billion Nairobi Western Bypass, which is 46 per cent completed. "It is part of a review of the progress of key government projects that are ongoing or that are not going on properly," Mohamed said.

He said what they have seen is a mixed bag of projects doing well and those that are not. Mohamed praised the Western Bypass contractor for doing a commendable job.

Post a comment
WATCH: The latest videos from the Star
by GILBERT KOECH AND EFFIE ATIENO
News
03 February 2021 - 05:00
Read The E-Paper