Only three other public hospitals have had radiotherapy machines. These are KNH, MTRH and the KUTRRH.

•Dr Nyangasi encouraged counties to improve screening for cancer, saying it will save costs and life. 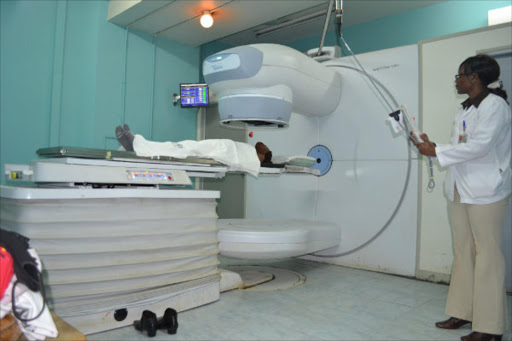 Three more counties will receive radiotherapy machines for cancer treatment by July, to reduce a backlog of patients.

Currently, the wait time for radiotherapy at Kenyatta National Hospital is about one month, while the Kenyatta University Teaching, Referral & Research Hospital (KUTRRH) is also beginning to have a lag due to high number of patients.

In total, the Ministry of Health projects Kenya will have an additional five counties offering radiotherapy services in public facilities at the end of this year.

The ministry is supporting establishment of new radiotherapy centres in Nakuru, Garissa, Mombasa, Nyeri and Uasin Gishu at Moi Teaching  and Referral Hospital where the machine began operation on February 1.

“The MTRH machine is already operational. We are working on the infrastructure and the centres in Nakuru, Garissa, and Mombasa will be up by July,” said Dr Mary Nyangasi, head of national cancer control programme at the Ministry of Health.

The machine in Nyeri will be brought in later in the year.

Currently only three public hospitals have radiotherapy machines. These are KNH, MTRH and the KUTRRH.

Dr Nyangasi spoke yesterday at the launch of the Economic and Social Consequences of Cancer in Kenya report by the World Bank and the Ministry of Health.

Kisii county also is also expecting a radiotherapy machine later in the year, supported by the ministry, while Kisumu will acquire a machine largely financed by the county government.

Dr Nyangasi encouraged counties to improve screening for cancer, saying it will save costs and life.

“Only 22 per cent of health facilities countrywide screen for cancer. We need to improve basic infrastructure for cancer screening.  Some treatments can be offered like excising tumour before it becomes invasive,” she said.

Dr Nyangasi said early screening is important for the patient because it improves outcomes and the patient is also unlikely to go for expensive procedures like radiotherapy.

Earlier, MTRH CEO Wilson Aruasa said at least 100 patients daily will be served on the hospital’s Linear Accelerator machine, bought for about Sh500 million with support by the ministries of Health and Energy, and the International Atomic Energy Agency.

The report launched on Wednesday describes the cancer journey of select patient.

Through this, the authors describe the direct and indirect costs families face; the difficult decisions and choices they need to make; and the socioeconomic and psychological implications of having a family member afflicted by cancer.

The report says the cost of treating cancer in Kenya weighs heavily on poor patients and often leads to impoverishment.

It praises the National Hospital Insurance Fund (NHIF), which now covers a limited package of inpatient and outpatient cancer services.

However, only 20 percent of the Kenyans have health insurance coverage, which means many households experience catastrophic health expenditures when a family member is diagnosed with cancer.

The report also used secondary data which shows only 22 percent of the poorest have heard of cervical cancer screening in comparison to 61 percent of the best off.

Likewise, only 11 percent of Kenyan women have ever been screened, yet cervical cancer is one of the leading cancers affecting women.

“Although screening for cervical and prostate cancer is covered under the NHIF, lack of awareness of the benefits of  early screening coupled with limited availability,” says the report.