AfCFTA is a lifeline for African economies - Uhuru

• He rallied other African states to work closely with the agency's Secretariat to ensure that continental trade arrangement succeeds. 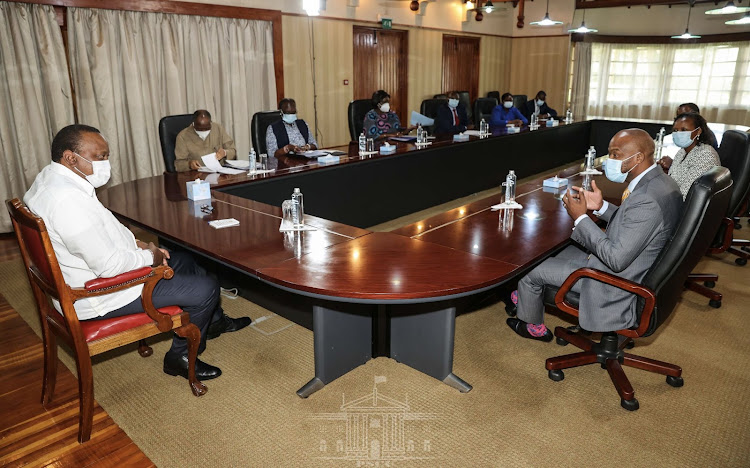 President Uhuru Kenyatta at Sagana State Lodge in Nyeri County at a meeting with AfCFTA's Secretary General Wamkele Mene who paid him a courtesy call on February 3, 2021
Image: PSCU

President Uhuru Kenyatta has said the success of the African Continental Free Trade Area (AfCFTA) will assist the continent overcome some of its pressing economic challenges.

Uhuru reaffirmed Kenya's commitment to AfCFTA and rallied other African states to work closely with the agency's Secretariat to ensure that continental trade arrangement succeeds.

The Head of State spoke Wednesday at Sagana State Lodge in Nyeri County, at a meeting with AfCFTA's Secretary General Wamkele Mene who paid him a courtesy call.

Beyond its economic importance, Uhuru pointed out that AfCFTA has the potential to accelerate continental integration efforts by promoting people-to-people interactions through trade.

The president also congratulated Mene on his appointment as the first AfCFTA Secretary General and applauded the South African economist for steering the organization ahead despite the disruptions brought about by the Covid-19 crisis.

Mene briefed the president on AfCFTA's road map which prioritizes industrial development, women and the youth, and thanked Kenya for backing his successful bid to lead the Pan-African institution.

At another meeting, Uhuru held talks with Sudan’s Special Envoy Mohammed Hassan Eltaashi who delivered a special message from the country's Sovereign Council.

He and the Special Envoy discussed a number of regional subjects among them the country's border dispute with Ethiopia and the ongoing African Union led efforts to unlock the Grand Ethiopian Renaissance Dam (GERD) dispute involving Sudan, Ethiopia and Egypt.

Uhuru congratulated the Sovereign Council for the successes achieved in the stabilization of Sudan especially the reforms being rolled out to guarantee the country's democratic transition.

He assured Prime Minister Abdalla Hamdok and the Sovereign Council of Kenya's continued partnership with Sudan in ensuring that the country regains its stability.

The outgoing envoy thanked the head of state for his successful tour of duty in the country and singled out reciprocal State Visits by Uhuru and Filipe Nyusi as well as the conferment of citizenship to Makonde people as the highest moments of his time in Kenya.

The president applauded Amb Lidimba for the strong Kenya-Mozambique bilateral ties cultivated during his tenure and wished him success in future endeavors.

CS Omamo and Head of Public Service Joseph Kinyua were present during the President's meeting with Sudan's Sovereign Council envoy and the outgoing Mozambican Ambassador.