They were casualties as employers readjusted operations to remain afloat.

• Most of the 5,000 guards were sent home on unpaid or indefinite leave

• The union says employers are not keen on recalling their members to work. 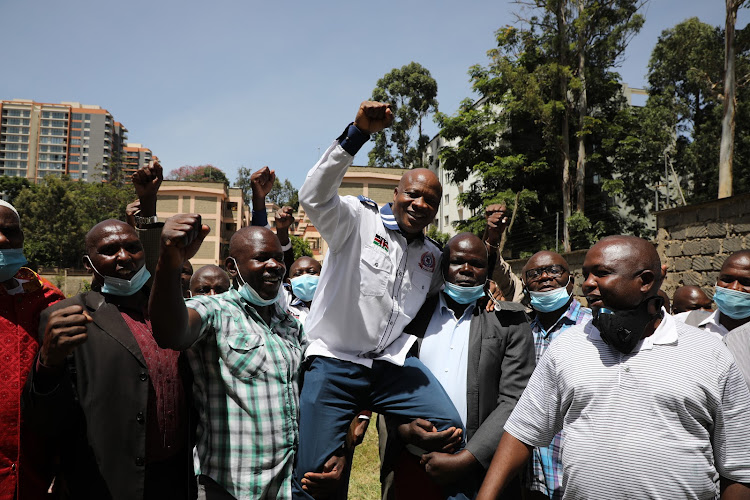 Thousands of security guards sacked due to the effects Covid-19 pandemic should be given back their jobs, their union has said.

The Kenya National Private Security Workers Union said the economy was recovering and the government should compel security firms to reinstate dismissed workers.

About 5,000 security guards lost their jobs, according to Isaac Andabwa, the union’s secretary-general. They were casualties as employers readjusted operations to remain afloat.

Most of them were sent home on unpaid or indefinite leave, which Andabwa wants reversed. The union says employers are not keen on recalling their members to work.

“We are calling on the Ministry of Labour to intervene and have our members back to work. They were sent home without any compensation and now some of them are unable to survive,” Andabwa said.

Those living in town are hardest hit since they can no longer afford basic needs especially food and shelter.

“Some have been kicked out of their houses for accrued rent arrears,” the KNPSWU boss said.

He spoke during a special delegates meeting that endorsed him to defend his seat in upcoming national elections. He will run unopposed.

All Cotu-affiliated unions are currently conducting elections for new office bearers as per labour requirements.

Ahead of the national delegates conference slated for next month, officials from the 13 branches across the country met in Nairobi and extended the term of Andabwa's team.

Buoyed by the endorsement, Andabwa revealed there was an attempt by some employers to have him kicked out.

“But we have successfully thwarted the coup orchestrated by a former employer who was sponsored by some security firms opposed to regulation and reforms,” Andabwa said.

He promised to ensure guards are properly remunerated and their welfare is well taken care of.

Andabwa promised to fight security companies hell-bent on frustrating the Private Security Regulation Act, that seeks to professionalise the sector.

Post a comment
WATCH: The latest videos from the Star
by GEORGE OWITI Correspondent - Machakos
News
02 February 2021 - 23:00
Read The E-Paper