Kenya called for the restoration of "constitutional order" 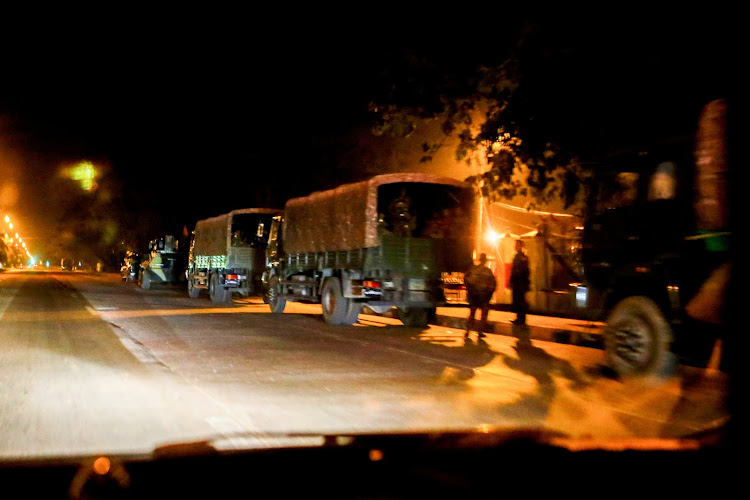 The Kenya government joined the international community on Monday in condemning the military coup in Myanmar. Kenya is one of the 15 members of the UN Security Council.

"Kenya therefore calls for the restoration of constitutional order, respect for the rule of law, the resolution of any and all electioneering disputes through lawful mechanisms, as well as the immediate release of the civilian leadership detained unlawfully," said the official statement.

Myanmar’s military seized power on Monday in a coup against the democratically elected government of Nobel laureate Aung San Suu Kyi, who was detained along with other leaders of her party in early morning raids.

The U.N. Security Council will meet on Tuesday, diplomats said, amid calls for a strong response.

The army said it had responded to “election fraud”, handing power to military chief General Min Aung Hlaing and imposing a state of emergency for a year in the country, also known as Burma, where neighbouring China has a powerful influence.

The generals made their move hours before parliament had been due to sit for the first time since the National League for Democracy’s (NLD) landslide win in a Nov. 8 election viewed as a referendum on Suu Kyi’s fledgling democratic rule.

The NLD said Suu Kyi had called on people to protest against the military takeover, quoting comments it said had been written in anticipation of a coup.

The military said Min Aung Hlaing, who had been nearing retirement, had pledged to practice a “genuine discipline-flourishing multiparty democratic system”. He promised a free and fair election and a handover of power to the winning party, it said, without giving a timeframe. 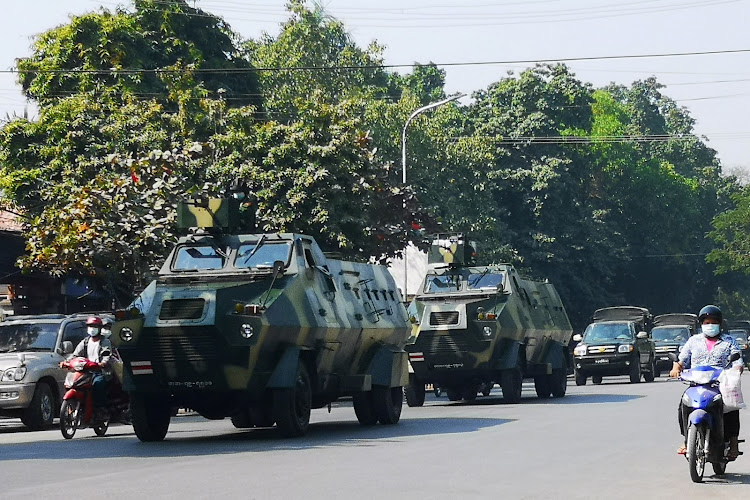 Myanmar Army armored vehicles drive past a street after they seized power in a coup in Mandalay, Myanmar February 2, 2021.
Image: REUTERS

Troops and riot police stood by in Yangon where residents rushed to markets to stock up on supplies and others lined up at ATMs to withdraw cash. Banks suspended services but said they would reopen from Tuesday.

Multinationals moved into the country after Suu Kyi’s party established the first civilian government in half a century in 2015.

The Nobel Peace Prize laureate’s election win followed decades of house arrest and struggle against the military, which had seized power in a 1962 coup and stamped out all dissent for decades.

While still hugely popular at home, her international standing was severely damaged after she failed to stop the expulsion of hundreds of thousands of Rohingyas in 2017.

The detentions came after days of tension between the civilian government and the military in the aftermath of the most recent election, in which Suu Kyi’s party won 83% of the vote.

An army takeover would put Myanmar “back under a dictatorship”, the pre-written statement on Facebook quoted Suu Kyi as saying.

“I urge people not to accept this, to respond and wholeheartedly to protest against the coup by the military,” it said.

Supporters of the military celebrated the coup, parading through Yangon in pickup trucks and waving national flags.

“Today is the day that people are happy,” one nationalist monk told a crowd in a video published on Facebook.

Democracy activists and NLD voters were horrified and angry.

“Our country was a bird that was just learning to fly. Now the army broke our wings,” student activist Si Thu Tun said.

Senior NLD leader Win Htein said in a Facebook post the army chief’s takeover demonstrated his ambition rather than concern for the country.

In the capital, security forces confined members of parliament to residential compounds on the day they had expected to take up their seats, representative Sai Lynn Myat said.

The United Nations led condemnation of the coup and calls for the release of detainees and restoration of democracy in comments largely echoed by Kenya, Australia, Britain, the European Union, India, Japan and the United States.

In Japan, a major aid donor with many businesses in Myanmar, a ruling party source said the government may have to rethink the strengthening of defence relations with the country undergone as part of regional efforts to counterbalance China.

China called on all sides in Myanmar to respect the constitution and uphold stability in a statement which “noted” events in the country rather than expressly condemning them.

Bangladesh, which is sheltering around one million Rohingya who fled violence in Myanmar, called for “peace and stability” and said it hoped a process to repatriate the refugees could move forward. Rohingya refugees in Bangladesh also condemned the takeover.

The Association of Southeast Asian Nations, of which Myanmar is a member, called for “dialogue, reconciliation and the return to normalcy” while in Bangkok, police clashed with a group of pro-democracy demonstrators outside Myanmar’s embassy.

“It’s their internal affair,” a Thai government official said of events in Myanmar - a hands-off approach also taken by Malaysia and the Philippines.

The November vote faced some criticism in the West for disenfranchising many Rohingya but the election commission rejected military complaints of fraud.

In its statement declaring the emergency, the military cited the failure of the commission to address complaints over voter lists, its refusal to postpone new parliamentary sessions, and protests by groups unhappy with the vote.

“Unless this problem is resolved, it will obstruct the path to democracy and it must therefore be resolved according to the law,” the military said, citing an emergency provision in the constitution in the event sovereignty is threatened.