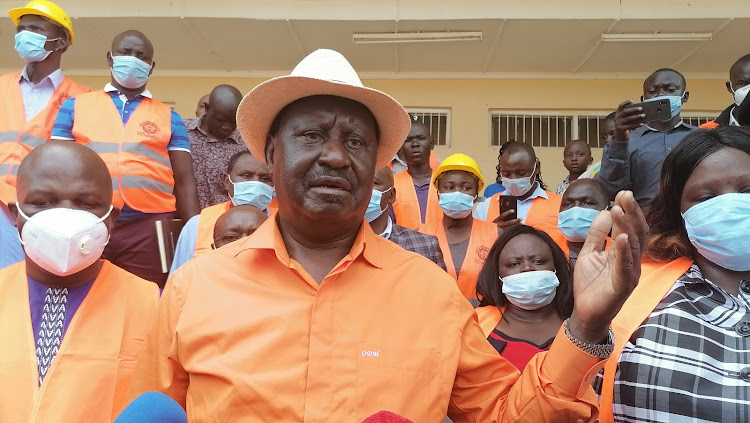 President Uhuru Kenyatta and ODM leader Raila Odinga have retreated to their backyard to drum support for Building Bridges Initiative days after it got the green light from the electoral body.

The ODM leader is planning a major meeting with stakeholders from the four Luo Nyanza Counties on February 8 where BBI will be the main agenda on the table.

Uhuru has been in Central Kenya since Friday in what State House said is inspection tour of government projects and meeting with elected leaders from the region to discuss among others the BBI.

In Kisumu, Raila will be meeting all Governors, MPs, Professionals and Members of the four County Assemblies of Migori, Homabay, Kisumu and Siaya.

The meeting will also bring on board representative of Kisumu business community and Luo Council of Elders.

Already invitation has been sent to almost 800 participants to the Nyanza regional Consultative meeting.

According to the letter dated January 29, each of the four counties will be represented by 200 delegates.

“You are hereby notified of a consultative meeting bringing together elected leaders, Council of Elders, professionals and Business people in the four counties specified above to be held on Monday, February 8, 2021, to be chaired by Party Leader Raila Odinga,” read part of the letter signed by ODM Secretary General Edwin Sifuna.

He added: “It is expected that each County delegation shall consist of not more than 200 people. The office of the Host Governor, Hon Peter Anyang’ Nyong’o shall be in contact with each county delegation through the respective Governor to provide further details on the meeting.”

On Tuesday next week, Raila will be hosting all ODM MCAs across the country in Nairobi to a BBI meeting.

There have been calls to the Assemblies to pass the BBI in record time and the two principals are in a push to have the MCAs approve the same at the earliest opportunity.

During the Sagana meeting, 10 county assemblies from Central Kenya vowed to pass the referendum Bill.

Kisumu Assembly has cut short its long recess and will resume sittings next week to deliberate on the Bill.

Sifuna confirmed the Tuesday meeting saying invitation had already been sent to all MCAs elected on ODM ticket in the 47 counties.

“Next week I have invited all my 56o MCAs to talk about the Building Bridges Initiative. They will meet experts who will take them through the documents,” Sifuna said on phone.

The meeting will also deliberate on the party’s way forward including the pending harmonization of the vacant seats set to begin soon.