The water levels in the Rift Valley lakes and Lake Victoria have been rising since 2010, submerging riparian areas, farmlands, infrastructure and causing a humanitarian crisis. 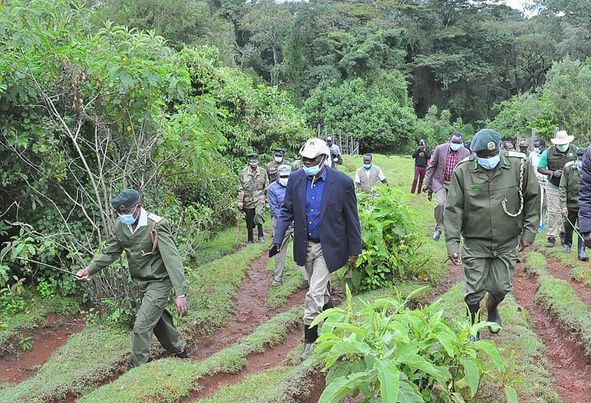 The government has appealed to the international community to help mobilise resources to address the humanitarian crisis caused by rising water levels in Lake Victoria and those in the Rift Valley.

The appeal came as a preliminary assessment report by a multi-agency team showed 28 people have so far died as a result of flooding caused by the rising water levels.

Three people died in Mwariki out of stress and depression while another six died in Kihoto after their properties were destroyed, the report said.

The virtual meeting was also attended by officials from USAID, Unep, and the EU.

The water levels in the Rift Valley lakes and Lake Victoria have been rising since 2010, submerging riparian areas, farmlands, infrastructure and causing a humanitarian crisis.

It has adversely affected property owners, communities, biodiversity and wildlife.

Following the human crisis created by the flooding, the government formed six technical teams that went for an excursion and scoping of the lakes between October 21 and November 1 last year.

He said that in the medium term, livelihood restoration is needed.

"From the preliminary assessment, the rising water levels have caused the humanitarian crisis that calls for urgent concerted effort. The government, therefore, needs to mobilise resources to address the issue," Kiptoo said.

He said a comprehensive study needs to be conducted on the hydrology, geology, ecosystems, and social-economic factors at play in the region to clearly understand the causes of this phenomenon and its impacts.

The education sector needs Sh250 million with the PS saying all those who are boarding have been temporarily relocated.

The energy sector needs Sh227.7 million and another Sh2 million for monitoring and evaluation.

In short term, a total of Sh2.9 billion is needed.

Kiptoo said a Cabinet Memorandum has been prepared for approval.

It said the increased discharge from springs and groundwater input due to saturated subsurface and recharged groundwater, as well as long term, lakes sedimentation through rivers feeding the lakes was also responsible.

Reduced evapotranspiration over the prolonged rainfall periods and catchment degradation due to anthropogenic activities enhancing sediment loading into the lakes was also cited as another cause.

Other include the setting of the lakes within confined basins in the rift floor that does not allow for the open discharge.

The report said the lakes receive substantial input from their lake-beds and springs around the lake some of which are hot water springs. Climate change impacts with the residence of the Indian Ocean Dipole in Eastern Africa have also been cited by the report as a cause.