• Wa Iria, the milkman who became a successful politician, is a presidential aspirant.

• He is said to have involved wife and brother-in-law in the alleged theft scheme. 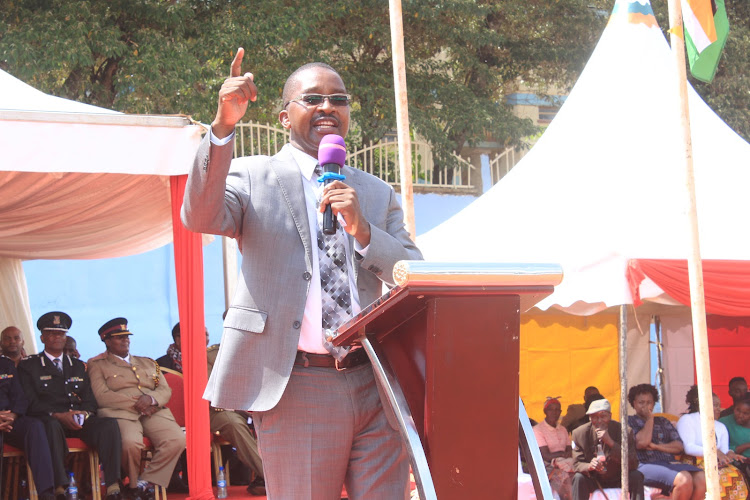 The anti-corruption court has frozen assets worth millions of  shillings associated with Muranga Governor Mwangi Wa Iria believed to be proceeds of corruption.

The Ethics and anti-Corruption Commission told the court that Wa Iria and his family received kickbacks from a contract worth Sh542 million, which the commission believes was awarded irregularly.

The commission is planning to file another application seeking to have the assets forfeited to the government at the conclusion of their probe.

The court case may deal a blow to the two-term governor who has declared his interest in running for president in 2022.

Wa Iria is also hoping to succeed Wycliffe Oparanya as Council of Governors chairman having served as the vice chair in the last one year.

In the court case, EACC says Wa Iria influenced the award of Sh542,610,615 media buying tender to Top Image Media Consultants Ltd — a firm the detectives say is owned by the governor's relatives and associates.

One Jane Mbuthia is listed as the director of the firm.

“It was alleged that Top Image Media Consultants Ltd, a company owned by Wa Iria’s associates/relatives had been irregularly awarded various media buying tenders in the county government of Muranga between the financial years 2014/2015 and 2016/2017 and received a sum of Sh542 million.

Reached for a comment, Mbuthia  told the Star that she was not aware of the EACC probe but said her dealings were clean.

“Anything I have done with Murang'a is above board. I do not know what anyone is talking about,” she responded.

Wa Iria did not respond to phone calls.

He however told the Star in a text message, "you cant pretend to talk to me after filing a story to suit your interests."

However, an aide who did not want to be quoted claimed the governor was being persecuted for throwing his hat in the presidential ring.

"Hii ni fitina. Once you declare you interest in such a big job, you will be fought. The governor is so popular across all the Mt Kenya region," he stated.

However Wa Iria's run-in with EACC started long before he declared he would be gunning for the country's top job.

In 2016 EACC detectives raided his house but the operations turned chaotic with investigators claiming they were assaulted by the governor's supporters.

The Murang'a county government tender committee has also told EACC, in the court documents, that it did not approve the awarding of the controversial tender.

After the payments were effected, EACC discovered, Top Image Media Consultants Ltd would wire back the proceeds to Wa Iria through a firm owned by his wife Jane Waigwe Kimani and his brother in law Solomon Mutura Kimani.

Jane and Solomon are the two are directors of Value View Ltd.

Part of the cash was then used to buy a property in Umoja Innercore at Sh7.5 million and 13 acres of land in Nyeri worth Sh8.8 million.

It's these properties that Justice James Wakiaga barred Wa Iria and his associates from dealing with to allow EACC to complete its investigations.

“I am satisfied that there are reasonable grounds advanced to satisfy the court at this stage that the property therein are proceeds of crime and corruption,” the judge said on Friday, putting a caveat on the properties for six months.

The Nairobi property, known as block 83/4/309, was  registered in the name of Value View Ltd, a firm whose directors are believed to be Wa Iria’s wife and brother-in-law.

In their dealings, Top Image Media Consultants Ltd did not send money directly to Wairia and his family.

Instead the money was sent to lawyers who bought the properties on their behalf.

According to EACC, Wa Iria initially wanted to buy 40 acres at Sh26.8 million but defaulted after paying for only 13 acres.

In its investigations, EACC went to great lengths to prove that the players were associates of the governor.

For instance, to prove that Jane is Wa Iria’s wife, detectives retrieved their records from the National Hospital Insurance Fund as well as a certificate of marriage.

The detectives also obtained an email by Mbuthia, the director of Top Image to the advocates of Value View Ltd and copied to Wa Iria seeking acknowledgement of Sh7.5 million for the purchase of the Umoja property.