Police called suspects a flight risk, saying the public was angry and they should not be released for their own safety

• Court orders suspected witchdoctor and client detained for seven days for investigation and psychiatric assessment in connection with an apparent ritual beheading.

• When police arrived on Sunday afternoon, they said they found two men - a 'traditional healer' and his 'client' - eating meat. It was not clear if it was human flesh, a beheaded sacrificial goat or a chicken whose heart had been ripped out. 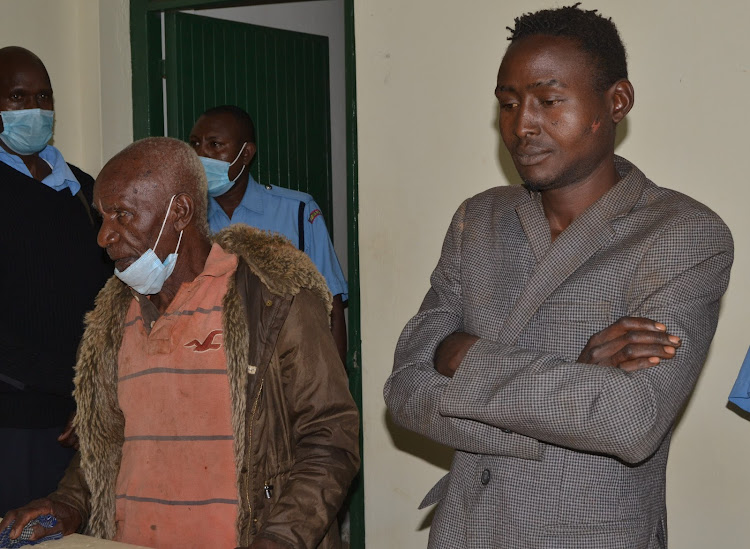 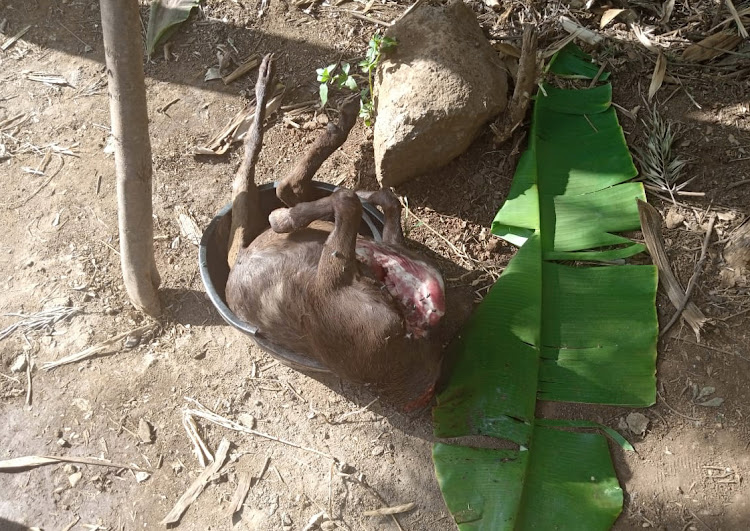 An elderly man and his 'client' accused of beheading a nine-year-old girl will be detained for seven days on suspicion of witchcraft ritual murder.

The killer or killers ripped out the heart of the victim, Deborah Kagendi Kinengeni, who regularly delivered milk. She was  brilliant, cheerful and talkative, a Chuka High Court was told on Tuesday.

The girl's father, Ignasius Mutunga, who spoke at their home said his daughter was attending church when she was summoned to his home by the elderly traditional healer. She went willingly because she often delivered milk to him.

The girl's brother, Evans Mawira, said he had asked the old man where his sister was. He said the old man told him to take his cows in exchange for her, the court heard.

Police in Tharaka Nithi county were allowed by a Chuka High Court on Tuesday to detain Suleiman Mati Mukira of Mpingu village in Mwimbi whom the police described as a "witchdoctor".

In an affidavit, police told the court Riungu had visited Mukira for "spiritual treatment" and beheaded the Grade 2 neighbour girl.

When police arrived on Sunday afternoon, they said they found two men - a 'traditional healer' and his 'client' - eating meat. It was not clear if it was human flesh, a beheaded sacrificial goat or a chicken whose heart had been ripped out.

The detention is to allow for investigations. The two men have not been charged in connection with the Sunday afternoon murder and suspected witchcraft.

They will undergo a psychiatric assessment before being charged and entering a plea.

It is against the law to practice witchcraft and sentences can be as long as 10  years. Murder carries a life sentence.

Police told senior resident magistrate Mwanamkuu Sudi, the investigating team considers Riungu a flight risk. They said both men's lives were in danger from an enraged public if they are released.

Congregants at the nearby Ambassador for Christ Fellowship heard the girl's screams, called police and rushed to the scene.

The body was found hidden in a gunny in a goat shed. The head was found in the compound.

“OCS Magutuni, DCI officers and SCPC Maara rushed to the scene and found the child having been killed. Her body was concealed in a goat shed, her head was cut off and placed outside the goat shed," the police report said..

Police said the homeowner told them his client had slaughtered the girl as a sacrifice.

Riungu did object to remaining in custody for seven days.

Mukira requested that he be released, saying he was old, sickly and suffering from a urinary tract ailment. Since the day of the death he had been depressed, he said.

The magistrate ordered the two to be detained at Chogoria police station for seven days.

The girl’s father, Ignasius Mutunga, of the Ambassador for Christ Fellowship, told the Star that when their service ended, his young boy called him telling him his sister had been slaughtered at Mukira’s home.

“When I heard this, I went to that home and found out police had already arrested the witchdoctor whom I solely blame for my daughter’s death because I got information he had asked for a chicken’s heart, a goat’s heart and that of a girl child.

"My daughter has been his frequent visitor delivering milk to the old man and he went to call her at the church. I appeal to police to serve me justice for losing my child in this ritualised cruel manner," her father said in court.

Mutunga said his daughter was especially precious as she was his last born.

Some of the paraphernalia found at the house include animal horns and other items.

Post a comment
WATCH: The latest videos from the Star
by GERALD MUTETHIA Correspondent, Meru
News
19 January 2021 - 17:37
Read The E-Paper