Nasa trio has been firing simultaneous salvos at DP Ruto. 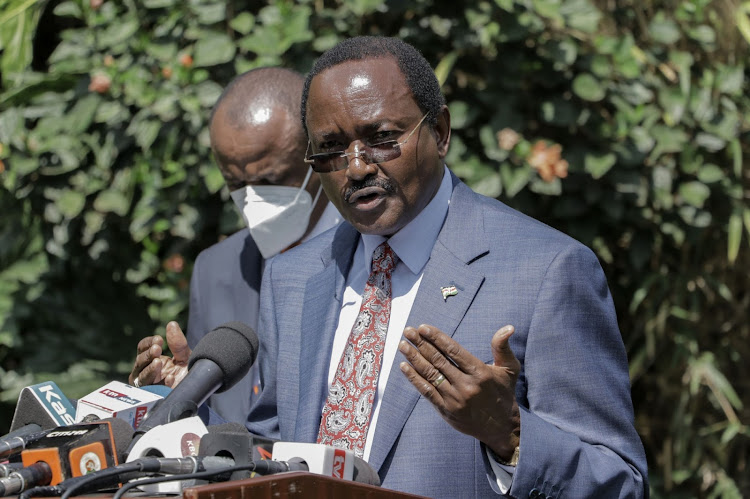 Wiper leader Kalonzo Musyoka has taken off the gloves and ganged up with ODM chief Raila Odinga in bashing William Ruto in what appears to be a well-coordinated onslaught on the Deputy President.

The Nasa trio of Kalonzo, Raila and ANC leader Musalia Mudavadi has been firing simultaneous salvos at DP Ruto.

Ruto has also been under fire from his boss, President Uhuru Kenyatta, with the recent one being Uhuru’s controversial suggestion of an end to the Kikuyu-Kalenjin domination of the presidency.

Speaking in Nairobi on Monday, Kalonzo enumerated scandals – some involving billions of taxpayers’ money – that he claimed had Ruto’s fingerprints. The DP has denied any involvement.

Kalonzo was responding to Ruto's claims that he had grabbed government land in Yatta, where he resides.

But the squabble did not start here.

Last week, the former Vice President said Ruto dished his entire 2013 Cabinet share to his Kalenjin community and accused him of pushing out some of Uhuru's nominees to pave way for his tribesmen.

But speaking in Bomet on Friday, Ruto rubbished Kalonzo's track record and questioned how he acquired the Yatta land.

According to Ruto, the Yatta parcel was government land, which the Wiper boss obtained irregularly using his influence as then vice president.

“You have been an MP, minister in almost every ministry and the Vice President and the only record you have is that where you live is government land. Then you are telling us that your party’s slogan is Kazi Kazi bila Wizi [Service without stealing], I think you are confused. It should be Wizi Wizi bila Kazi [stealing without service],”  Ruto said in Bomet.

But Kalonzo fought off the allegations and said he was ready to be investigated.

Kalonzo, who has since been appointed South Sudan special peace envoy, termed Ruto’s claims frivolous and unsubstantiated and called on authorities to investigate every aspect of the claim.

“I uphold the highest moral and ethical standards in all my affairs. I have nothing to hide and I today challenge the authorities to open an investigation into this matter,” Kalonzo said.

He denied benefitting from public land, saying he will subject himself to the authorities to clear his name.

"I am today presenting myself for a thorough investigation by the Directorate of Criminal Investigation as well as the Ethics and Anti-Corruption Commission," he said.

“I want the matter settled once and for all. Indeed, this is the time to separate the truth from lies and malicious propaganda," he added.

The Wiper leader challenged the DP to equally offer himself for investigation concerning a record 10 scandals – the majority of them on land grabbing - which he claimed Ruto was involved.

Referring to DP as ‘Arap Mashamba’, the ex-VP said Ruto’s appetite for public and private land is an open secret.

Some of the scandals he wants Ruto to be investigated on include the alleged grabbing of land belonging to former Vice President Joseph Murumbi, attempted land grab of Langata Primary School playground, Weston Hotel land saga and 100 acres belonging to the late IDP Adrian Muteshi.

He also cited the alleged grabbing of huge tracks of land in Taita Taveta, the Sh39 billion fake arms scandal and an incident where a businessman lost Sh300 million to people allegedly in DP’s office.

“Can DP Ruto explain what he knows about the loss of billions of public funds meant for the construction of Arror and Kimwarer dams? Why was he so defensive when news of the scandal broke out? What information did he want kept out of the public’s eye concerning those collapsed projects? ” Kalonzo asked.

The remarks fit into Raila’s sustained onslaught against the DP.

Raila has trashed Ruto's hustler narrative and accused him of undermining the President, leading to a long list of unfulfilled Jubilee promises.

At the weekend, Raila said Ruto is the reason Jubilee administration has not delivered on most of its campaign pledges.

He cited laptops to primary school children, one million jobs, 47 modern stadia and 100km of tarmac road as some of the unfulfilled Jubilee promises.

Mudavadi's ANC party has, on the other hand, threatened to sponsor a censure motion against Ruto when the House resumes sittings next month.

In a rejoinder to Kalonzo, Ruto’s spokesman David Mugonyi  maintained the Yatta land was illegally acquired.

He challenged the Wiper leader to explain to Kenyans how it changed hands from public to private.

Instead, Mugonyi alleged Kalonzo has panicked over the Machakos senatorial by-election and resorted to smear campaign against Ruto.

“Kalonzo does not have confidence in his candidate. In his panic, he has saddled himself with a ridiculous heap of bizarre allegations in pursuit of Deputy President William Ruto,” Mugonyi said.

“He must desist from the cheap tactics of trying to salvage his political mojo by attacking the Deputy President. The Machakos contest will be won or lost on the ground.”

Kalonzo also wants the DP to subject himself to lifestyle audit to explain how he obtained some of his ‘ill-gotten’ wealth.

"Let us preach unity and avoid divisive politics that can plunge the country into chaos. This is our home and we do not have another country. People of DP's camp must not be given a chance to wreak havoc through wolfishly deceitful manipulations. They must be stopped in their tracks."

Post a comment
WATCH: The latest videos from the Star
by LUKE AWICH Political Reporter
News
19 January 2021 - 07:05
Read The E-Paper