Why Uhuru has kept off Mt Kenya BBI push

• 2022 politics said to have eaten into the BBI prospects 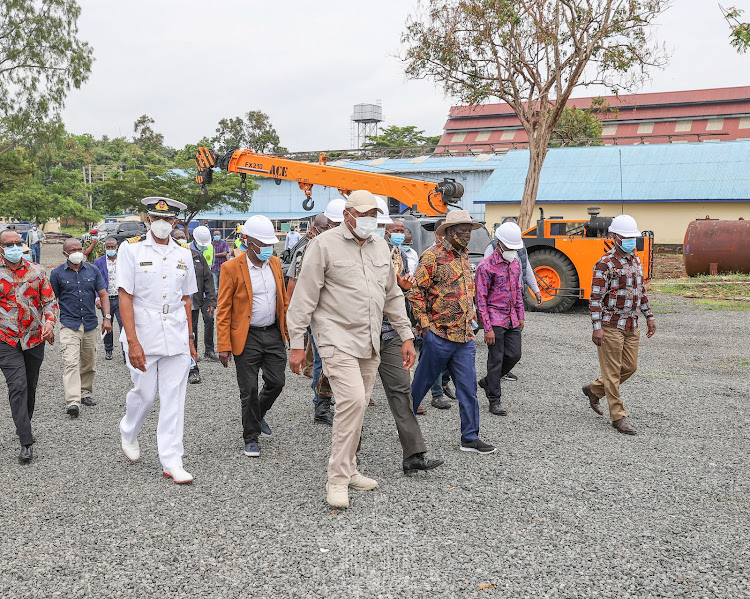 President Uhuru Kenyatta accompanied by Raila Odinga and other leaders when he visited Kisumu Port where the Kenyan military is constructing a new ship yard as part of the ongoing rehabilitation and expansion of the important lake transport facility on January 10, 2021.
Image: PSCU

President Uhuru Kenyatta may not hit the ground to campaign for the Building Bridges Initiative in his Mt Kenya backyard any time soon, his allies have said.

The President’s inner circle feels that it would be too early for the head of the state to popularise a document that is still with the IEBC and is yet to be approved by county assemblies.

This is why an advance team of Cabinet secretaries, principal secretaries, and senior government officials has been mandated to market the document in the region.

The team, which will be headed by Agriculture Cabinet Secretary Peter Munya, met on Friday in Nairobi to chart a plan.

The meeting convened by Macharia also resolved to form a co-chaired committee to discuss economic empowerment of the Mt Kenya people.

Muranga Senator Irungu Kang’ata, in a terse letter to President Kenyatta, warned in December last year that the BBI faced defeat in the region.

He asked the President to personally lead campaigns for the document, saying the timing of the constitutional change process was off.

“Efforts need to be made to rally regionally all MPs irrespective of their political factions behind this cause,” the Senate Majority Whip told the President.

ODM leader Raila Odinga’s camp has appealed to the President to accompany the former prime minister on tours of the region.

The President has been pitching for the BBI in his various addresses, saying the country is in a constitutional moment.

President Kenyatta's bitter falling out with Ruto and his bromance with Raila has stirred a storm in the region, muddying the waters for BBI there.

A senior government official who attended the La Mada meeting but sought anonymity to speak on the matter said the President may lead a BBI drive only at the tail end of the process.

The thinking, the official said, is that the President would be going against his word on premature political campaigns.

The officer said constant politicking was the reason for the "now-obvious fallout between President Kenyatta and DP William Ruto".

“When the President starts campaigning, he would be derailed from achieving his agenda for Kenyans. That is why we will still see less of him in public rallies.”

First in their agenda, the insider said, is to separate the issues captured in the Building Bridges Initiative from the 2022 succession politics.

“BBI is our agenda and being a document with a lot of promise regarding solving the problems we have in terms of what it offers, we think it should be supported,” the senior official said.

He said they are working on a plan to give more information on the goodies in the BBI document to counter the narrative sold by the Tangatanga faction of Jubilee.

The Cabinet team, the official said, will work with elected leaders to deliver this plan, adding that all political leaders –including those in Tangatanga, will be involved.

“We will meet as a group of elected leaders and government officers and come up with a strategy to market the document,” the official said. 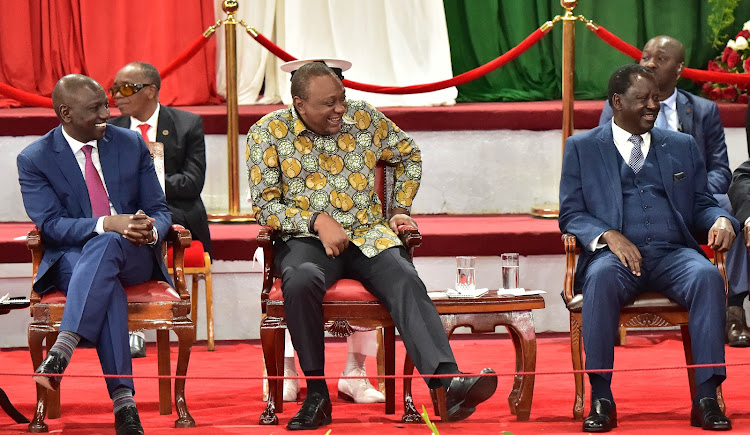 BBI LAUNCH: Deputy President William Ruto, President Uhuru Kenyatta and ODM leader Raila Odinga at the launch of the BBI report at the Bomas of Kenya on November 27, 2019.
Image: DPPS

“We are still trying to put our thoughts together to have a strategy. It is not a secret. It will be inclusive. When it comes to the ground, MPs will be the ones to speak with the people.”

He said they are looking at including leaders from both the Executive; Legislature and community leaders who interact with wananchi such as church leaders so that all are on the same page.

“We are doing this with the view that even if we have different views, at least people are given an opportunity to say why they oppose or support and then we build a consensus.”

“We don’t expect everybody to agree and disagree. Much as this is politics, we also feel the BBI will take the country forward,” the official said.

Public Service CS Margaret Kobia, who was part of the meeting, said senior government officers – in the Munya team – have reached consensus on the strategy.

The BBI popularity has suffered a hit in the wake of the jostling for the region’s vote and the positioning by leaders bidding for seats there.

In the face of the fever of 2022 politics kicking, a number of politicians have shied away from touting the document, ostensibly to avert a backlash from locals against the BBI.

The confusion in Mt Kenya linked to succession politics and the BBI.
News
5 months ago

But Ndaragwa MP Jeremiah Kioni, a key BBI proponent in the region, dismissed the notion and moved to lift the lid on why the pro-BBI team in Mt Kenya has yet to begin work aggressively.

He said the document may appear to be facing resistance because those who are pro-BBI have not sold it in Mt Kenya.

“The only narrative that has been available to the people is the one fighting the BBI. Those who are pro-BBI have not gone to the people. Why? We have a plan.”

Urging for patience, Kioni said, “There sounds like there is resistance because only one side of the narrative has been sold.”

“When we go out and sell, our selling will be the easiest because we will be selling the truth. When that time comes, we will be asking all to do their bit because this document is for Kenyans,” he said.

Kioni said at the moment any leader, including chiefs and pastors who have understood the BBI can to sell it.

“The civil servants – PSs, CSs, heads of parastatals, should do their bit. I will then expect the political leadership to be at the forefront in doing their bit.”

“That political leadership will be guided by the President who is the top leadership in our region,” Kioni said, expressing confidence that the document will be passed.

“With the little we have done casually, everybody has been asking us why we have not come to tell them more. But we say that time is not yet here.”

Prof Peter Kagwanja, a political commentator from Mt Kenya, said the problem in the region is that the kingpin (President Kenyatta) has not marketed the BBI himself.

He argued that there is anxiety over the President’s imminent exit in 2022 “so leaders and some residents see opportunity in Ruto.”

In his view, the BBI is seen as a Raila sweetener to bag the Mt Kenya vote, a constituency which DP Ruto is laying 2022 political stakes on.

“People are ready to forego the goodies in the face of the perception that the BBI is a Raila project.”

Kagwanja’s point is that the people want someone who sits at the negotiating table from the region to speak about the BBI.

“The tide will change when the President hits the ground to market the document which has more for Mt Kenya compared with other regions.”

He said the process is sequential, saying there was no way they can go to wananchi before the bill is ready and anyone citing delays must be blind to the process.

“The real roll-out would only be after the county assemblies approve the bill. Even so, you will notice that there are more people accepting it before the roll-out,” the Kipipiri MP said.

He added that those who have been campaigning against the BBI would “soon lack lies to spread over the document.”

“How will they tell Kajiado, Uasin Gishu, Kiambu, Kwale and Kilifi and so on to oppose the BBI yet they are bound to get additional constituencies?” Kimunya asked.

“In the meantime, there are small initiatives at the individual level. If we come out now, we have people asking us why tell us about a document that is still with the IEBC?”

Kimunya warned of trouble for the anti-BBI forces saying more people are appreciating that the BBI has nothing to do with Uhuru or Raila’s 2022 plans.

Raila in tours, starting with Nairobi.
News
5 months ago

The President's ultimate declaration on endorsement will give Mt Kenya direction,
Siasa
6 months ago