A student was among the new cases

•The CS announced that 123 more people had tested positive for the virus from a sample size 4,948 tested in 24 hours. Representing a positivity rate of 2.4 per cent.

•The CS announced that 123 more people had tested positive for the virus from a sample size 4,948 tested in 24 hours. Representing a positivity rate of 2.4 per cent. 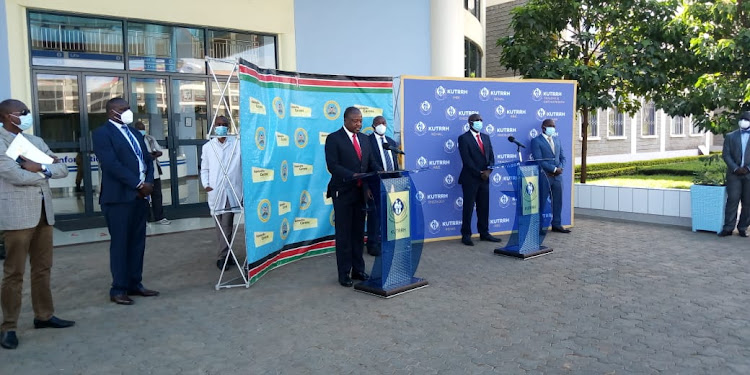 The government might not relax the Covid-19 containment measures soon, the Health Ministry has disclosed.

During the daily Covid update at Kenyatta University Teaching and Referral Hospital on Wednesday, Kagwe said despite the positivity rate being relatively low in the past few weeks, the government is putting into consideration other factors such as the reopening of schools.

“Under normal circumstances, and given the positivity rate we have been experiencing over the last one or two weeks, we would be thinking about declaration of a flattened curve,” Kagwe said.

“However we cannot do so at the moment because we have not quite taken into consideration the impact of the holiday season as well as the effects of reopening of our schools so for now we will be retaining the containment measures that we have such as the curfew,” he added.

The CS announced that 123 more people had tested positive for the virus from a sample size 4,948 tested in 24 hours. Representing a positivity rate of 2.4 per cent.

This now brings the total number of positive cases in the country to 98,555, with the cumulative tests now standing at 1,102,595.

The rate has been below three per cent in the last three days.

“We will continue to urge people to keep washing their hands and sanitizing, keeping their distances and we emphasize the use of masks so that we can keep those figures where they are. You have observed in other parts of the world where the figures have come down, the positivity rate has dropped and then a sudden surge has taken those countries back to square A.”

A student was among the new cases, with Kagwe saying the case may have originated from home as the father tested positive. His father is among those in isolation.

He urged parents to keep their children at home if they suspect they are positive.

Four more Kenyans succumbed to the virus, raising the fatalities to 1,720. On a positive note, 412 patients recovered from the virus, 378 from the home based care programme and 34 were discharged from the various health facilities countrywide, pushing the recoveries to 81,667.

As at Wednesday, 675 patients were admitted in various health facilities, while 1,945 were under the home based care and isolation. Similarly, there were 26 patients under ICU, 17 of whom were on ventilator support and eight on supplemental oxygen while one was under observation.

Another 14 patients were separately on supplemental oxygen out of whom 111 were in the general wards and three in the high dependency unit.