•Tuju, however, said that the party has never discussed Ruto’s impeachment despite a fresh push by MPs allied to ANC leader Musalia Mudavadi.

•UDA has already fielded candidates in the upcoming parliamentary and senatorial by-elections, contradicting the Jubilee position to pull out of the polls. 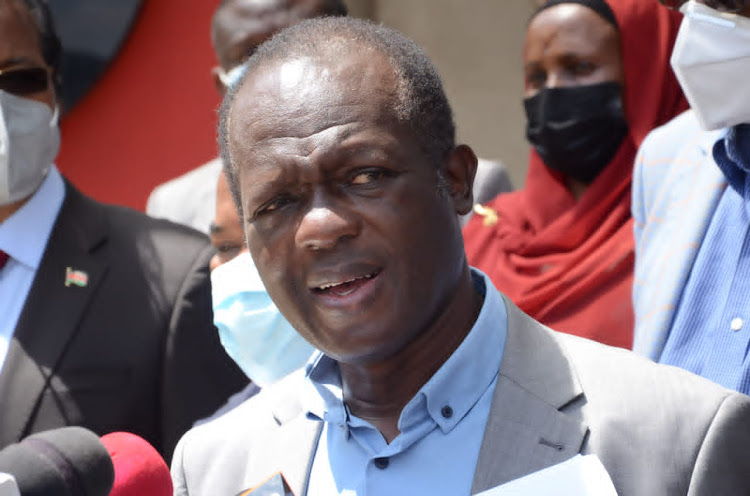 Deputy President William Ruto and his allies are staring at a punishment by the Jubilee Party for joining and advancing the interests of the United Democratic Party.

Secretary-general Raphael Tuju on Wednesday said they could face penalties as he downplayed threats by ANC MPs to impeach the DP for alleged insubordination.

Speaking during a press conference at Jubilee Party headquarters in Pangani, Nairobi, Tuju said disciplinary issues are handled by the party disciplinary committee.

The SG disclosed that he is waiting for the decision of the committee to be forwarded to the National Management Committee and the National Executive Council for a final decision.

Tuju, however, said the party has never discussed Ruto’s impeachment despite a fresh push by MPs allied to ANC leader Musalia Mudavadi.

“When it comes to statements from another party with respect to a member of Jubilee and so forth, it is not something that we have discussed,” Tuju said.

Ruto and his allies have shifted to UDA, formerly known as Party of Development and Reforms, a Jubilee affiliate party, citing frustrations in the ruling party.

The party also changed its symbol from a bull to a wheelbarrow and Kazi ni Kazi as its slogan.

The wheelbarrow has been the face of the hustler nation empowerment programme headed by the DP that has attracted a lot of criticism from supporters of the BBI.

At the press conference, Senate Deputy Majority Leader Fatuma Dullo, the only senator elected on PDR,  claimed the party was renamed without consultation.

“We have seen the change of name in the media as elected members, not only myself but as MPs who were elected on PDR. There has not been consultation in as far as a change of name is concerned,” she said.

Dullo, however, maintained that the party is still an affiliate of Jubilee Coalition and that the change of name has not affected the coalition arrangement.

UDA has already fielded candidates in the upcoming parliamentary and senatorial by-elections, contradicting the Jubilee position to pull out of the polls.

On Tuesday, Tuju announced that Jubilee will not be fielding candidates in the parliamentary by-election in Kabuchai and Matungu constituencies as well as senatorial seat poll in Machakos county.

The SG cited the party’s need to avoid conflict with ANC, Ford Kenya, ODM and Wiper which he said are currently enjoying the good working relationship with Jubilee Party.

“It is the decision of the Jubilee Party that given the bigger picture of bringing this country together through the BBI avenue, ceding ground to the NASA parties is essential to ensuring that we do not open unnecessary arenas for conflict with our very able partners in the BBI,” Tuju said.

He, however, disclosed that Jubilee will field a candidate for Nairobi governor seat and three ward seats.

“As for Nairobi seat for governor, we are on standby mode as the matter plays out in the High Court and the Nairobi county assembly,” he said.

He unveiled and handed party certificates to Virginia Wamaitha for Hells Gate ward in Nakuru, Francis Njoroge for London ward in Nakuru and Lucy Ngendo for Huruma ward in Uasin Gishu.