• Raila, who yesterday met 800 young people from Nairobi, said the President was aware of the meeting and that he had given his blessings.

• He said they will be targeting the grassroots in what is seen as a strategy to turn the tables on Deputy President William Ruto. 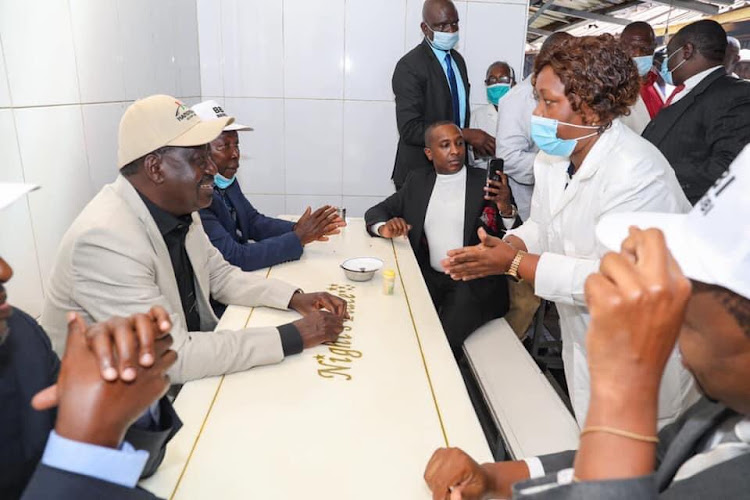 ODM leader Raila Odinga has hinted at a plan to mount a joint countrywide charm offensive with President Uhuru Kenyatta during the 2020 presidential run.

He said they will be targeting the grassroots in what is seen as a strategy to turn the tables on Deputy President William Ruto.

The handshake partners have started their quest by rallying ODM and Jubilee youth leaders to work together to campaign for the Building Bridges Initiative, starting with Nairobi.

Raila, who yesterday met 800 young people from Nairobi, said the President was aware of the meeting and that he had given his blessings.

“I spoke the other day with my brother Uhuru and agreed that we bring together the Nairobi youths,” he said.

“We agreed that we should first speak with the Nairobi youth and bring together the Jubilee and ODM youths so that we can start the journey together.”

They will move around constituencies, wards, villages, and households to map support for BBI.

Raila said relying on public rallies to drive the BBI agenda might be misleading as it would be difficult to tell genuine supporters.

“We must know our people right from the grassroots,” he said.

“From Nairobi we will go to all parts of the country, Machakos, Mombasa, Lamu, Lodwar, Migori, Kinangop, Mandera, Moyale and even to Eldoret so that Kenyans can realise that it has dawned.”

The Uhuru-Raila strategy could reverse Ruto's gains and counter the growing 'hustler nation'.

The recently launched United Democratic Alliance party, associated with Ruto, is seen as part of a political scheme by the Tangatanga brigade to divorce Jubilee.

The new strategy comes days after Uhuru came close to confirming that he would not support Ruto in 2022.

The President said in Vihiga last Saturday that the presidency does not belong to two tribes – Kikuyu and Kalenjin.

He said it was time other communities took over, a statement that has elicited heated reactions, especially from among Ruto’s allies who have been angling for the President's endorsement.

“I can also say there are only two tribes that have occupied the top seat, perhaps it is time for another community to lead,” Kenyatta said.

The President and DP Ruto came together in 2012 in an agreement the latter would take over after 2022, but that is no longer tenable.

However, Uhuru appears to be fully aboard the BBI train, hence the call for ODM and Jubilee youths to work together going forward. 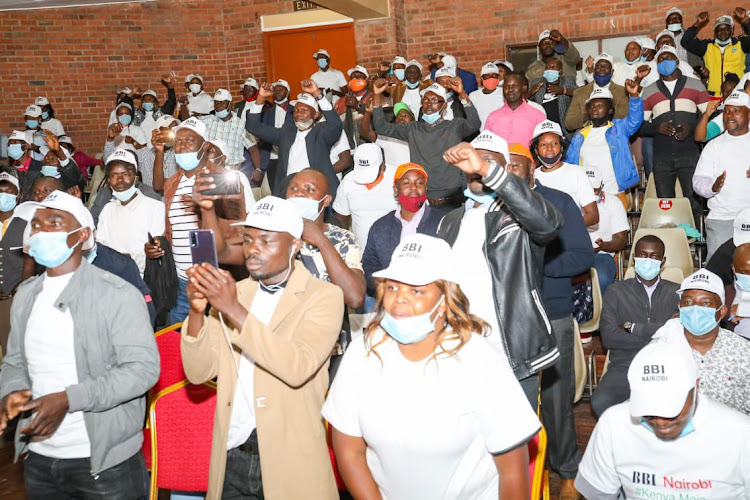 The ODM leader took a swipe at Ruto, saying the DP should marshal the courage and oppose the BBI instead of poking holes in it from within.

“This is someone who wants to say ‘NO’ but lacks the courage to do so,” the former PM said, urging his supporters not to be swayed.

Raila dismissed calls for multiple-questions, saying it was like giving Kenyans an exam “yet 50 per cent of the people cannot write and read.”

He said the BBI has three facets of recommendations which require administrative action, legislative action, and a change of Constitution.

The thinking in the handshake camp is that the issues proposed in the BBI cannot wait for the 2022 General Election.

I heard Ruto complain that he supported Kenyatta not because he was Kikuyu. But where did they come up with the debt theory? There is no debt owed to anyone politically

Raila said their vision is to have a Kenya where citizens get healthcare services, whether they have money or not, where elderly persons get stipends and women are given space to nurture their ambitions.

“We must know our people right from the grassroots. We will do better than follow crowds which don’t give the correct picture,” he said.

He put a strong case for the expanded Executive, saying it should be more efficient and more accountable.

BBI is seeking to introduce the post of Prime Minister and two deputies as well as the Leader of the Official Opposition.

Leaders who accompanied Raila to the Ufungamano meeting said the time was ripe for his (ODM leader’s) presidency.

Junet said, “I heard Ruto complain that he supported Kenyatta not because he was Kikuyu. But where did they come up with the debt theory? There is no debt owed to anyone politically.”

Owino said, “Ruto has been talking about the dynasty. He is the biggest dynasty alive.”

Waweru said they had been worried about Nairobi but were now confident since the two parties were together.

Kamanda said, “We are waiting for him [Ruto] to come out and oppose the BBI.”