How project ‘Tame Ruto’ is collapsing under weight of incompetence

By the sheer incompetence and lethargy of those charged with it, the President’s side probably thinks it is ODM’s problem

• The project to tame DP William Ruto lacks leadership and strategy. In the beginning, it appeared to have been left to senior civil servants such as Interior PS Karanja Kibicho.

• Lately, the project seems to have been placed at the doorstep of ODM and Raila Odinga, who would be the biggest beneficiaries from the DP's declining fortunes. 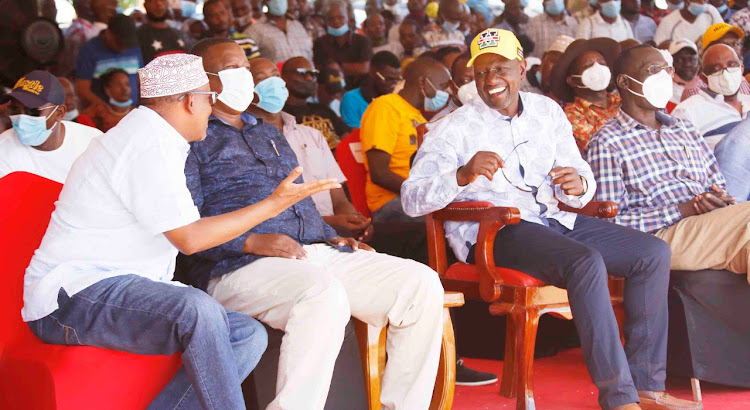 It was around the time then Kiambu Governor Ferdinand Waititu hosted a Tangatanga meeting attended by youths clad in yellow, rather than the Jubilee red, an action that seemed a throwback to the days when Deputy President William Ruto led the URP.

Being a heavy-duty consumer of history and political intrigue and since everybody at the lunch table was washing down the meal with copious amounts of politics, I took the chance to ask the two Jubilee insiders, “Just how did we get here?

"How did it become okay for people in the President’s own party to disobey him so openly, then actually go on to antagonise him in his own county? Why are so many elected officials from the Mt Kenya region openly casting their lot with the DP rather than the President?”

The two insiders opted to start from the beginning.

Apparently, in the early life of their coalition, the differences in political approach between President Uhuru Kenyatta and DP Ruto became clear.

Uhuru, quintessentially from the Kibaki mould, wasn’t enthusiastic about the 'receiving goodwill delegations' style of politics or' greeting the members' -euphemism for dishing out handouts to supporters.

“Have you ever seen the boss (Uhuru) receiving goodwill delegations in Gatundu or at his home in Nairobi?” Of course, I hadn’t.

“Like Kibaki, he is not made for that kind of politics. But Ruto is a graduate of the Moi School and the Raila University of politics. He goes right to the people, meets them at his home, remembers people from the remotest parts of the country by their names, and is not averse to popping up at your rural home unannounced for lunch!”

It turns out that when Jubilee was conducting its primaries in 2017, Ruto practically controlled every structure of the party, and most of those elected through Jubilee in the 2017 General Election felt they owed allegiance to him.

It wasn’t until poll losers in Central Kenya raised an alarm over how the Jubilee nominations had been conducted that the President apparently first realised there was a problem in the party.

By then, the party’s elected folks and large parts of its grassroots were already loyal to Ruto and his 2022 agenda, even as the President tried to restore focus on his own term and legacy.

Fast forward to last week during the funeral service of former Nyamira Governor John Nyagarama. If it had been intended as a “funeral with a difference”, devoid of all the Tangatanga noise and indignity, and it was going quite well, up to a certain point.

Indeed, one speaker even thanked Interior CS Fred Matiang’i for ensuring Nyagarama’s service was full of class and dignity, euphemisms for 'keeping away Tangatanga from the burial'. That was until someone invited MPs to “say just your name and one word!”

I don’t know why masters of ceremonies still waste time asking Kenyan politicians to say “just your name and one word”, knowing very well politicians think they would die if they did that!

Anyway, as sure as day follows night, you were never going to bet against South Mugirango MP Sylvanus Osoro delivering greetings from DP Ruto. And as soon as he did, cheers broke out in the audience.

If Matiang’i had worked to keep off the Tangatanga vibe from the funeral, he didn’t try hard enough. Which is strange because he has access to security intelligence and should have had prior knowledge of this.

We can also deduce that Ruto followers were so many in the neighbourhood that any attempt to bar them from the service would have left the funeral with no mourners. This brings me to the elephant in the room.

If indeed conventional wisdom has it that the President has parted company with his deputy, and intends to keep him out of power in 2022, then the methods and approaches are mostly achieving the opposite effect.

To begin with, the project to tame Ruto lacks leadership and strategy. In the beginning, it appeared to have been left to senior civil servants such as Interior PS Karanja Kibicho. But there is only so much a civil servant can do when dealing with a sitting Deputy President.

Lately, the project seems to have been placed at the doorstep of ODM and its leader, Raila Odinga, who would be the biggest beneficiaries from any declining fortunes of the DP.

But without state power and government structures, the best the ODM brigade can do is to engage in a political slur contest with Ruto.

The ODM side of the Handshake obviously assumes that Ruto is the President’s problem, and the project to stop him should be led by his side.

On the other hand, by the sheer incompetence and lethargy of those charged with it, the President’s side probably thinks it is ODM’s problem.

The Msambweni debacle should by now be a pointer to the ODM side that even though Uhuru’s side may declare support for ODM in electoral contests in this period, it will not pull its weight when it comes to resources and personnel.

This is even though its access to intelligence is something ODM would benefit from.

As fate would have it, there is a big by-election coming up in Nairobi, in which, in a reversal of Msambweni, the Uhuru wing of Jubilee will need ODM’s help in keeping Ruto’s Tangatanga hands off the big prize.

Given the sheer tokenism of support it gave ODM in Msambweni, I wonder how much motivation ODM has in reciprocating unless of course a 'sweetheart deal' is placed on the table. However, my first instinct is that Jubilee should let ODM run the entire Nairobi ticket.

There is enough credible evidence that Uhuru’s Jubilee has no idea how to handle the DP, and even more, evidence to show that left to its own devices without government attachment, ODM can indeed go toe to toe with Tangatanga for any seat.

It is even possible that when not constrained by the narratives of its support for the government and the latter’s perceived failures (which is what Ruto exploits to promise 'alternatives'), ODM could bounce back in a big way, and recover its mojo in the coming months.

As for how to stop Ruto running away with the national narrative of the haves and have nots, while growing support in the most unlikely places, the Handshake team of Uhuru and Raila must be told that the rudderless and lethargic nature of this project doesn’t inspire confidence, and is a venture that may run out of time soon!

He has asked leaders to avoid politics of tribalism as ethnicity.
News
5 months ago

Ruto painted as a mix of courage, cowardice and diplomacy.
News
1 year ago