ODM in a do-or-die battle in Matungu by-election

Party secretary general Edwin Sifuna tells the Star the Orange party will not field a candidate in Kabuchai. 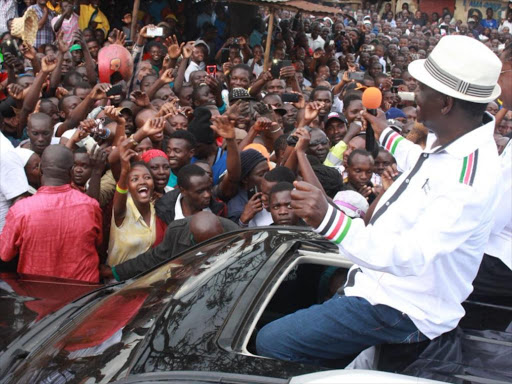 Former Prime Minister Raila Odinga’s ODM party is on a do-or-die mission in the Matungu by-election to reinvent itself following the painful Msambweni defeat.

The Orange party has withdrawn from the Nairobi governor's race and announced backing the ruling Jubilee candidate in a strategic decision to focus its arsenal on the Western Kenya by-election.

ANC leader Musalia Mudavadi is also battling to retain the Matungu seat and has settled on Peter Nabulindo to fly the party's flag.

Mudavadi and Ford Kenya leader Moses Wetang'ula are in a deal to ensure they do not lose Matungu and Kabuchai seats.

Ford Kenya will not field a candidate in Matungu, while ANC will not participate in the Kabuchai poll in what is seen as a plan to elbow Raila and Deputy President William Ruto out of Western.

Of the two by-elections, ODM has decided to concentrate all its energy in Matungu, a seat it once held before losing it to an ANC candidate in 2017.

ODM secretary general Edwin Sifuna told the Star the Orange party would not be fielding a candidate in Kabuchai.

ODM also has its eyes on the vacant Kiamokama, London and Huruma wards.

On Thursday, the party chose an experienced hand – former Matungu MP David Were – to fly the party’s flag in the March 4 by-election.

Keen to avoid a repeat of the Msambweni thrashing, the Orange Party fronted another experienced pair of hands in the region’s politics – Kakamega Governor Wycliffe Oparanya – to lead Were’s campaigns.

The influence of governors on grassroots politics has become apparent in recent days, especially in the just concluded Msambweni by-election.

The victory of independent candidate Faisal Bader is partly attributed to the clout of Kwale Governor Salim Mvurya.

Oparanya will be rallying the ODM campaign on Were’s track record during his 15 years as the area Member of Parliament.

Were served as the MP for Matungu from 2002 to 2017 when he lost to the late Justus Murunga. He vied on Jubilee Party ticket in 2017, having fallen out with the Orange party leadership.

Sifuna said Were was a strong candidate with the capacity to emerge victorious in the contest.

On Wednesday, the ODM deputy party leader announced the party will do more of door-to-door campaigns as opposed to huge rallies in line with the Covid-19 measures.

“We shall go down to the villages and campaign for our candidate and we are confident we shall win,” Oparanya said at Chungwa House during the unveiling of Were.

He was accompanied by ODM’s director of elections Junet Mohamed and National Elections Board chairperson Catherine Mumma.