FLED FOR HER LIFE

Will she tell tales? Former IEBC commissioner will be UNDP'S governance and peace building coordinator based in Ethiopia. 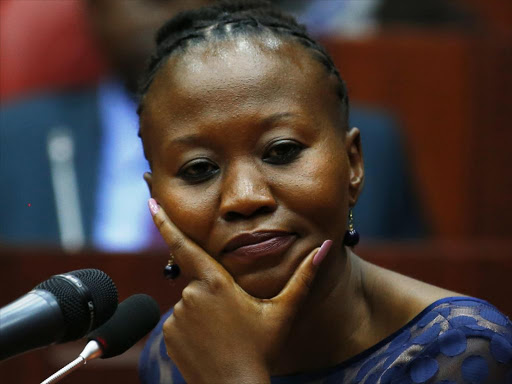 AKOMBE: Roselyn Aombe during the vetting for the position of IEBC commissioner by the Parliamentary Justice and Legal Affairs committee on January 10, 2017.
Image: JACK OWUOR

Akombe will work under the UN Development Programme as the governance and peace building coordinator.

Akombe, who said she fled Kenya for her life after the disputed 2017 presidential election, said she would testify in any inquest into the murder of IEBC ICT expert Chris Msando.

The murder is unsolved.

She said she was silenced and warned against testifying. She called Msando a victim of pre-poll political machinations. Akombe had also cited a long list of systemic and other problems at the IEBC.

In her new role, Kenyan-born Akombe will coordinate UNDP programmes across the continent through the regional office.

As UNDP's Governance and Peacebuilding Africa Coordinator, she will spearhead the agency's efforts to support regional states and bodies to address common and trans-border development challenges.

“After 14 years on the political side of the UN family, glad to switch to my other passion –development,” Akombe tweeted on Monday on the new appointment.

The new posting entails working closely with African heads of state and she is expected to interact with President Uhuru Kenyatta.

The UNDP regional service centre and sub-regional teams are drawn from all UNDP bureaus.

They work closely with one another to support country offices and regional partners.

Akombe has been chief of policy at the Policy and Mediation Division, Department of Political and Peace Building Affairs at the United Nations in New York

In 2017, Akombe served as a Commissioner with the IEBC.

She resigned on October 18, 2017, after casting doubt on the integrity of the country electoral process.

She also previously worked with the African Union as an Economist.

Akombe advocates the protection of human rights, social justice, environmental protection, and inclusion of youth and women in all political and socio-economic spheres of life.

Prior to her work with the African Union and the United Nations, she was active in the Kenyan student movement, civil society and the women’s movement.