•Amoth explained although the UHC targets all Kenyans, it will not be free and the government will only pay premiums for about one million poor families. 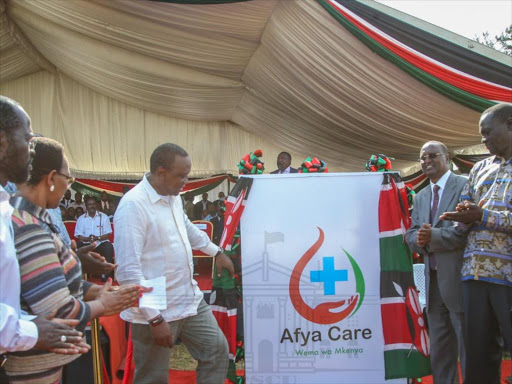 NEW TURN: President Uhuru Kenyatta unveils the UHC logo during the launch of the pilot programme in Kisumu on December 13, 2018.
Image: PSCU

Kenyans may be forced to pay Sh500 every month to the National Hospital Insurance Fund to enjoy health services next year.

The money will fund the Universal Health Coverage, which will be rolled out in 2021.

Acting director general for health Patrick Amoth said the Sh500 monthly contribution  - or Sh6,000 annually - will be mandatory for all Kenyans, whether one is employed or jobless.

It will cover one nuclear family, being at most two parents and children under 18 years.  Dependents can also be covered through their parents up to 24 years if they are in school, or lifetime if they are severely disabled.

“The mandatory UHC scheme…will act as the national scheme for all persons resident in Kenya whether one is formally employed or not, including the very poor,” he told journalists.

The government piloted a fully state-funded UHC scheme in four counties last year, but was found to be unsustainable.

Amoth explained that although the UHC targets all Kenyans, it will not be free and the government will only pay premiums for about one million poor families.

The registration of these poor families was launched by President Uhuru Kenyatta on October 31.

The Kenyan ministry has also drawn the package of health services payers will benefit from.

In October last year, the NHIF Reforms Panel recommended a government-funded scheme - similar to the one in Britain - where the state allocates funds directly to NHIF to cover about 30 million Kenyans.

The team noted that the default rate is already high in that scheme and only 35 per cent of registered members consistently pay Sh500 every month.

Currently, only about 18 per cent of Kenyans are insured through NHIF.

Wambugu said the Sh50 billion that had been allocated to UHC in the 2018-19 budget would be enough to cover all uninsured Kenyans for one year.

On the upcoming national rollout, Kenyans in formal employment will continue to make their existing contributions, which could be more than Sh500 depending on salary level.

"For those employed, nothing changes. The benefit is to Kenyans who are not employed," Amoth added.

According to a Treasury report released last month, the government will also chip in to support the UHC.

Treasury said the government will spend Sh29.7 billion for the national rollout  next fiscal year.

There is also queued another Sh12 billion to cater for the UHC scheme for the supply of equipment to facilities providing primary healthcare.