• Scheme will include large and small-scale irrigation projects alongside a model farm being implemented by the National Irrigation Authority as well as a ranching company for pastoralists in Tana River County.

• He allayed fears by locals that the subdivided land would be issued to people from outside the area saying that the settlement aspect would favour the host communities. 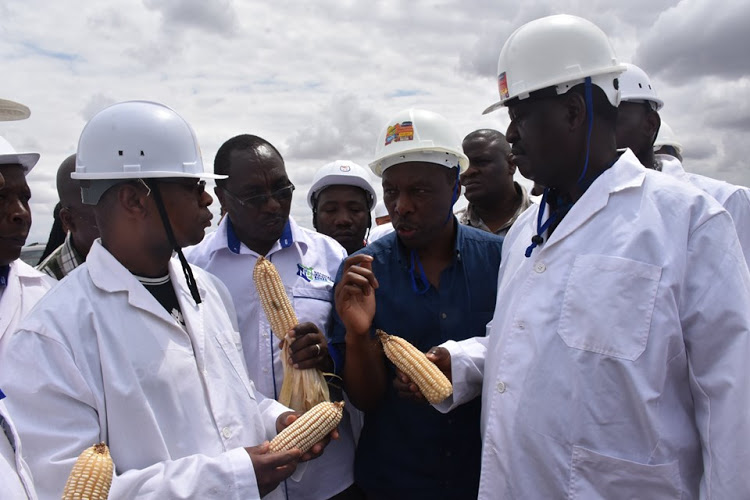 It is now official.

The land on which the multi-billion-shilling Galana/Kulalu Food Security Project is being implemented is being turned into an irrigation and settlement scheme.

The Ministry of Lands has started surveying the land to pave the way for private investors and host communities to be allocated the 1.75 million acres of the land situated in Kilifi and Tana River Counties.

Lands and Physical Planning Principal Secretary Nicholas Muraguri said the scheme will include large- and small-scale irrigation projects alongside a model farm being implemented by the National Irrigation Authority (NIA) as well as a ranching company for pastoralists in Tana River County.

He spoke on Thursday while on an inspection tour of survey work on the project land.

He was accompanied by his Irrigation counterpart Joseph Irungu among other senior ministry and National Irrigation Authority officials.

“The subdivision has put into consideration the interests of local communities such as pastoralists who will benefit from a 250,000 land for a group ranch while the rest will get land for small scale irrigation," said Muraguri.

He allayed fears by locals that the subdivided land would be issued to people from outside the area saying that the settlement aspect would favour the host communities.

Recently, Garsen Member of Parliament Ali Wario petitioned in the National Assembly to look into the activities on the project land, saying he had information that the land was being subdivided without the involvement of local leaders.

Muraguri, however, said Kilifi and Tana River County leaders had been fully involved in the two counties, noting that the leadership of Tana River County had in fact identified 250,000 acres that will be developed into a group ranch.

He said that the survey and subdivision will be completed by June 2021 so that investors can be allowed to take part in economic activity in the expansive project.

The PS said his ministry was in consultation with the Agricultural Development (ADC) Corporation and the Kenya Wildlife Service (KWS) to create a clear cutline between the scheme land and the Tsavo National Park to prevent conflicts between the settlers and livestock.

“At one end we have the park so we must keep off the park and at the same time we must also define the extent of the corridor to the Galana River so that the pastoralists are supported,” he said.

PS Irungu confirmed that the 10,000-acre model farm would be complete by June 2021, setting the stage for private investors to take over the project but added that the government was yet to receive any bids or application for space in the project.

“We have to plan first, investors won’t come unless we have good roads, a bridge, energy and it’s a bit early until we get all the enablers maybe until the June next year. We want to make a change in this area and you can see the immense potential it has like the camp you see here and we need to improve on these,” he said.

He added that both small scale and large scale investors will be allocated space in the project to farm and produce enough food items for the country.

“We can do irrigation on both small scale and large scale and micro enterprises starting up this year to change the whole economic landscape of Galana Kulalu,” he said.

The Galana Conservancy will also not be touched or relocated but according to Mr Irungu wild animals were being relocated by the Kenya Wildlife Service (KWS) from the farm to the conservancy and the Tsavo East national pack.

“The national park is under government management and the farm is under ADC and animals do not observe boundaries and KWS is relocating animals in preparation for the settlement we have talked about. We are not relocating the conservancy at all because it is not under the 1.57 million acres of land of the project,” he said.

More than 40,000 families of local farmers and pastoralists are set to be settled in the project once the survey and subdivision work is complete mid next year.

Last week, residents of Garsen Sub County through their MP Ali Wario petitioned parliament to investigate irregular activities taking place at the site after they claimed that government land surveyors had invaded the 1.7 million-acre farm that spreads across Tana River and Kilifi Counties with an aim of sub dividing it.

Wario tabled the petition titled ‘Public Petition regarding subdivision of Agricultural Development Corporation (ADC) land and stakeholder consultation on the Galana Kulalu Food Security Project’ on the floor of the house hence eliciting reactions from colleagues.

The MP had also written to the Muraguri over the subdivision of the land requesting the PS to stop the activities.

Baya said that the Galana Kulalu Food Security Project was turning out to be another land issue at the Coastal region adding that the subdivision was not in good faith.

“The Coast region has enough land issues and Galana Kulalu is turning out as another land issue in the area. There have been attempts to reduce these land issues but we can see people from the ministry of lands and physical planning are now deliberately creating another problem at the Coast region,” he said.

He added that the project was supposed to be a national food security project but was instead being converted into a settlement area and the subdivision was a recipe for chaos and clashes.

“There was no commitment to engage people of the Coast on the project and eventually we shall see a similar problem like those in Lamu, Mpeketoni and Tana River where clashes occur due to land and the departmental committee on land should put the matter into consideration unless it wants to be part of the history that created another land problem at the Coast,” he said.

Mbadi said that the project was wrong from the start and its practicality was put in question during its inception six years ago.

“This is a project that we had issues with from the word go and in fact, at its inception, we were sceptical about the practicality of it succeeding. We know the history of government giving out land to individuals in this country and the process has never favoured the people it should but it is given to people who will be absentee landlords who will keep it for speculative purposes and will not grow anything and therefore I support this motion,” he said.

Post a comment
WATCH: The latest videos from the Star
by KNA EMMANUEL MASHA
News
04 December 2020 - 14:57
Read The E-Paper