The plan involves mounting legal battles in court and calling for street protests. 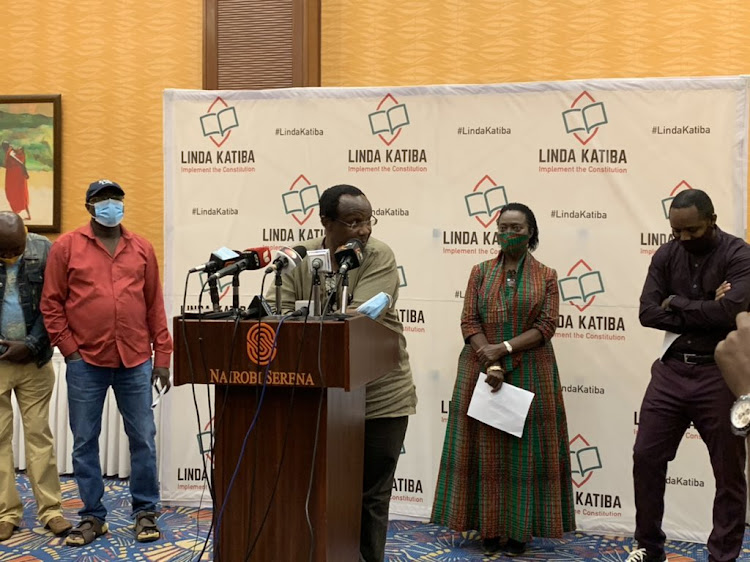 Members of the Katiba Forum group during a press conference in Nairobi on November 30, 2020.
Image: COURTESY

A well-coordinated plan is afoot to throw into disarray President Uhuru Kenyatta and Raila Odinga’s push to amend the Constitution, the Star has established.

A section of the political elite and influential civil society players has teamed up and launched a multi-pronged strategy to stop the BBI process. If they succeed, scuttling BBI could deal a staggering blow to Uhuru and Raila.

The plan involves mounting legal battles in court, calling for street protests and if that doesn't work, leading a robust 'NO' campaign.

It would focus, among other things, on BBI plans to expand Parliament to as many as 540 members - something hard pressed wananchi are not likely to cheer about.

On Monday, civil society players won a major victory in their bid to stop the referendum after the High Court dismissed government efforts to kill a case challenging the law change.

Karua told the Star on Monday she is ready to lead the 'No' campaign.

“With humility and without hesitation, I am willing and set to lead the 'No' campaigns. We are calling on Kenyans to resist this illegitimate, illegal and ill-timed constitutional amendment initiative,” Karua said.

Ndii told the Star they will employ all “legal means to stop the BBI referendum".

“We are talking about a multi-pronged strategy to save the Constitution of Kenya 2010 from the assault by the BBI proponents. We have some cases in court and before we start talking about a referendum, there are massive hurdles in the way for BBI,” Ndii said.

On Monday, civil society players secured a major victory in their bid to stop the Building Bridges Initiative referendum after the court ruled that a case challenging the process will proceed.

The judge referred the matter to Chief Justice David Maraga to constitute a bench to hear and determine the case.

“This matter is of immense public interest; the issues raised are not only weighty but also complex and unsettled…the petitioners have crafted clear issues of law to be dealt with,” the judge said.

The petitioners, through lawyer Nelson Havi, want the court to declare that five chapters of the 2010 Constitution - One, Two, Four, Nine and 10 - cannot be altered or changed through amendments, either by Parliament or popular initiative.

They argue these chapters form the foundation of the country and should not be altered.

Should they fail in court, the group is determined to lead an aggressive national campaign against the BBI push to ensure the referendum outcome does not meet the requisite threshold.

Karua said Kenyans are ready to reject what she termed as an "illegitimate attempt to overthrow the 2010 Constitution".

The Narc Kenya leader insisted that a popular initiative process to amend the Constitution cannot be initiated by State actors using public resources.

“If the state wanted to amend the Constitution, it should have gone the parliamentary way,” Karua said, adding that like-minded Kenyans will do everything possible to block the process.

Karua has said it was illegal for the state to ask provincial administration officers to spearhead the collection of signatures if the process was really a popular initiative.

“The provincial administration has been made to violate the Constitution. Dear Kenyans, you are not alone. Let us join hands because we are many. We are also appealing to the media to ensure that alternative voices also get a hearing.” she said on Sunday.

It’s not clear if there is any nexus between the civil society players and Deputy President William Ruto's axis.

Ndii has previously said that he is willing to team up with Ruto to defeat the “dynasties”.

“Several months ago, he [Ndii] attempted to convince the Kenya Human Rights Commission (KHRC) – the leading rights NGO – that both the KHRC and civil society should work with Mr Ruto,” lawyer Makau Mutua said of Ndii in a Sunday Nation op-ed.

It has also emerged Ruto faces a massive dilemma in dealing with his allies who insist they will lead the 'No' campaigns, despite the DP appearing to suggest that he will support the BBI process.

Kibwana who has been working with Ruto has stated that he will oppose the referendum.

The Makueni governor said the government should focus on dealing with the country's ballooning public debt and attend to the Covid-19 pandemic instead of leading campaigns for BBI.

“BBI is about 2022, not change. All Kenyans who love their country must now lead the 'No' referendum campaign against BBI. I will be one among the number to the end,” Kivutha said last Friday.

Former Machakos Senator Johnson Muthama told the Star his position against the BBI process remains unchanged as the document failed to address issues raised by many Kenyans.

“There needs to be consensus so we are told the criteria used to deny, for example, Mwingi a county [status]. Unless that is done,  I will not support the document,” he said.

There are reports that the DP could be pushing for a referendum in which Kenyans will have an opportunity to vote separately on each BBI proposal in the referendum - not to vote yes or no on the entire document.

The DP's suggestion on a vote on each proposal is different from the proposal by President Uhuru and Raila who want the Bill submitted to the referendum as a package.

On Monday Ruto fought off claims by his critics that he had turned into a 'watermelon' in the BBI process insisting “tremendous progress had been achieved” in the push for a non-contested referendum..

“It is never too late to do the right thing...consensus on remaining issues and process so as to have a non-divisive vote is the best option,” Ruto tweeted.

There are concerns within Ruto's camp that he risks losing the church, the Muslims and the civil society groups seen as key pillars of his initial anti-BBI push. He has been banking on them for his 2022 presidential ambitions.

Ruto on Wednesday is to hold talks with Tangatanga leaders at his Karen home to appraise them of his decision to back a referendum. This follows his shocking move to throw his weight behind the push to change the Constitution.

After making a major U-turn and appearing to conditionally support the law-change push, Ruto has been walking a tightrope to balance the scales as the BBI referendum gathers momentum - as does the push to scuttle it.