You will be in for a rude shock, Kiunjuri says over referendum

Says political brokers pushing for an 'us' vs 'them' contest through the BBI referendum.

• The Service Party of Kenya now says it will throw its weight behind the BBI referendum Bill.

• Through party leader Mwangi Kiunjuri, the party said the amended BBI document has addressed the majority of concerns raised by its people. 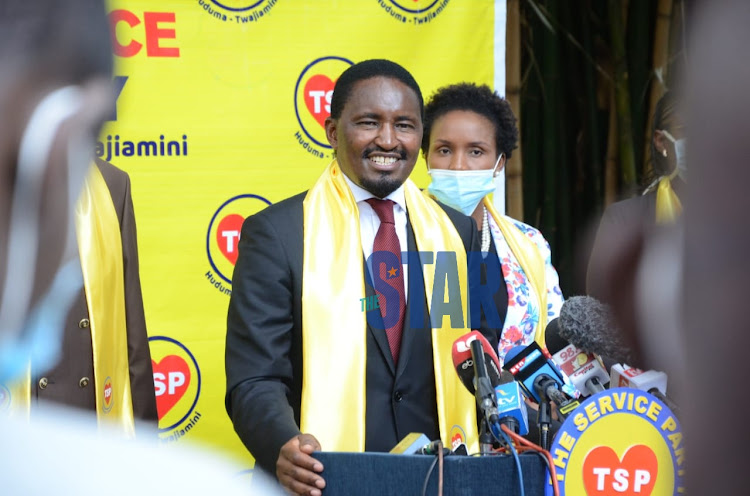 The Service Party of Kenya now says it will throw its weight behind the BBI referendum Bill.

Through party leader Mwangi Kiunjuri, the party said the amended BBI document has addressed the majority of concerns raised by its people.

"As a Party, we recognise that the amended BBI document has addressed the majority of concerns that our people had raised. We are at the moment scrutinising views raised by our people before coming out with a party position next week," Kiunjuri said.

Kiunjuri was speaking in Nanyuki during a thanksgiving ceremony organized by Nanyuki Ward MCA Veronica Ikunyua in honor of his son Alfred Ikunyua who has recovered after a tragic road accident.

"The Service Party has been equivocal about service delivery to the people. When the BBI report was launched at Bomas, we outlined our irreducible minimum which included guaranteed minimum returns for our farmers, equitable distribution of the national cake(One man one shilling one vote) and non politicisation of electoral body," he said.

"We asked our people to read the document, understand and point out their views," he added.

Kiunjuri, a close ally of Deputy President William Ruto said from the onset the party is however concerned that some political brokers are pushing for an 'us' vs 'them' contest that will definitely leave the country more divided.

"We want to tell them that they will be in for a rude shock next week when taps start to dry up during the rainy season," he said.

Says document adjusted to accommodate most of the concerns raised.
News
1 year ago

Kiunjuri sentiments comes a day after DP Ruto softened his stand on the referendum.

When the BBI report was launched at the Bomas of Kenya in October, Ruto had his reservations and has been campaigning for recognition of the small businesses in the country.

Ruto had also said that the issue of job creation as well as boosting youths in business needs to be relooked at.

But on Friday after he missed the launch of the signature collection Ruto claimed through his Twitter account that the ‘New Article 11A in the BBI Constitution bill introduced after Bomas will anchor the ordinary people.'

He added that it will favour the ‘hustler economics of wheelbarrow, boda boda, Mama mboga, pastoralists/butchers and guaranteed minimum returns on coffee, tea,korosho, sugar and,maize.

Earlier on the DP reiterated that a consensus is still possible even as the signature collection for the referendum goes on.

He said that a consensus will end a non-divisive referendum that will give Kenyans the opportunity to express themselves without 'a US vs THEM, WIN vs LOSE contest.'

"Unity is the strength needed to fight Covid-19 and organise the economy," he said.

The only new article introduced is 11A(3),  which calls for legislation.
News
1 year ago
by PATRICK VIDIJA Investigative Journalist
News
28 November 2020 - 15:26