• Kenya’s biggest imports from the UK include vehicles, pharmaceuticals, and paper – worth almost Sh133 billion.

• Britain has deep ties with Kenya, not just through business, but insecurity, health, and education. 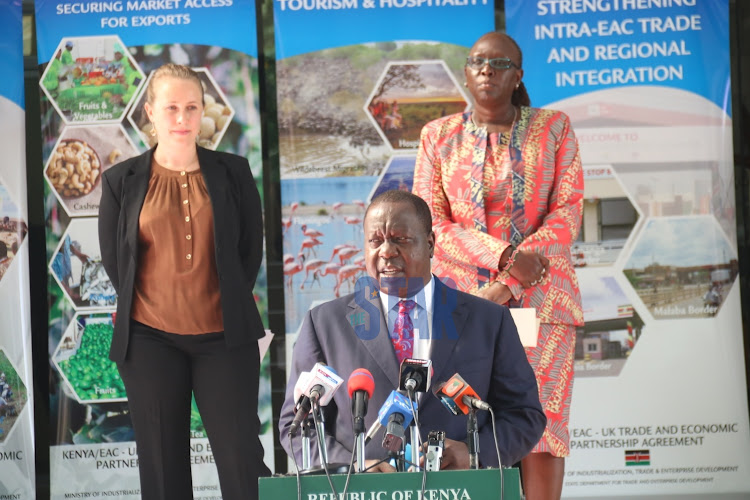 The UK has moved a step closer to signing a sixth bilateral trade deal in Africa today, which will allow British and Kenyan companies to expand on trade already worth Sh200 billion a year.

UK-Kenya Free Trade Agreement, once signed, will guarantee tariff-free access to both markets.

It was agreed during a virtual meeting of senior government of Kenya CSs and UK government Ministers on Tuesday.

The event was led by Interior CS Fred Matiangi and Trade CS Betty Maina, while the UK was represented by the Minister for Africa, James Duddridge, International Trade Minister, Ranil Jayawardena, and the Prime Minister’s Trade Envoy to Kenya, Theo Clarke.

As the largest economy in the region and amongst the top ten in Africa, trade with Kenya is important to the UK and also opens up the potential for further deals with the East African Community trade bloc.

Jane Marriott, the British High Commissioner to Kenya, said: “I’m delighted we’ve been able to conclude this trade agreement, which lays the foundations to expand our trade in the future.

“Whether it is in tea, horticulture, pharmaceuticals, or vehicles, trade between our countries continues to grow. It’s fantastic we’ve been able to complete negotiations so quickly and we look forward to working with the Government of Kenya to build on this in the years ahead.”

The UK’s Minister for Africa, James Duddridge, said: “The UK will always be a champion of liberal free trade that prioritises the mutual benefits of doing business with integrity.

“This trade deal will build on the UK and Kenya’s historic ties and is the perfect platform to increase our trading partners in the future.”

The UK’s International Trade Minister, Ranil Jayawardena, said: “I’m delighted we've reached a trade agreement with Kenya. This deal gives businesses the certainty that they’ll be able to continue trading as they do now, supporting jobs and livelihoods in both our countries.

“I look forward to forging further trade ties with Kenya - the largest economy in the region - and working with other East African countries to agree on trade continuity, harnessing free and fair trade to secure shared prosperity for our peoples.”

The agreement will be formally signed shortly once it has been subject to formal checks.

Britain has deep ties with Kenya, not just through business, but insecurity, health, and education.

Prime Minister Boris Johnson and President Uhuru Kenyatta agreed on a five-year Strategic Partnership between the UK and Kenya in January of this year, which was signed in Downing Street during the Africa Investment Summit.