ODM leader insists holding a referendum should not cost more than Sh2 billion. 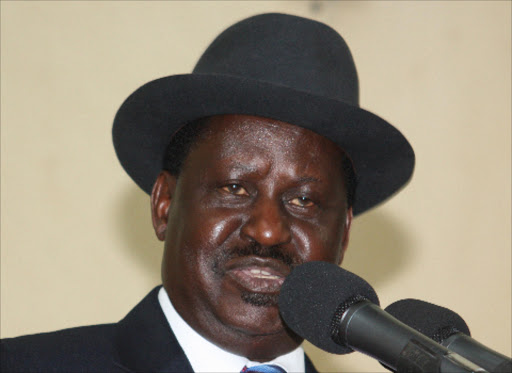 ODM leader Raila Odinga has dismissed the electoral agency's assertion that Sh14 billion will be required for the BBI referendum.

He said a referendum should not cost more than Sh2 billion and accused the Independent Electoral and Boundaries Commission of plotting daylight theft of the country’s resources.

Raila, who is in DR Congo for a two-day visit, said the cost per voter should be between Sh100 and Sh200.

According to the IEBC 2017 register, Kenya had 19.6 million voters, a number that the commission projects might have increased given the ongoing registration.

“Among countries with an established tradition of holding regular elections, the cost per voter ranges from approximately $1 to $2. There is absolutely no excuse why Kenya, with a long history of holding elections, should pay more,” Raila said in a statement.

He added, “Elections have become one of the major avenues for ripping off the country through various schemes that are never meant to save costs or yield credible results but to line pockets of individuals. Those schemes are evident in the IEBC's latest reasoning.”

The former Prime Minister termed the IEBC’s suggestion outrageous and one that justifies calls for its overhaul.

“That kind of impunity cannot be allowed to soil an exercise like the upcoming BBI referendum whose objectives, among others, is to stop the culture of theft of public resources and corruption in public offices. The upcoming referendum is also intended to bring sanity to our election processes including aligning the costs to the global trends. That message needs to get to IEBC,” Raila said.

But the ODM boss said they would second a team to work with the IEBC to ensure a cost-effective referendum given the prevailing economic situation.

“Shortly, we will pick a team to sit with IEBC and itemise what will lead to a cost-effective referendum exercise and elections. IEBC seems to be determined never to develop an operational performance that contains costs,” Raila said.

“We should be able to conduct a one-ballot referendum at no more than Sh2 billion for 20 million voters."

But Kimilili MP Didmus Barasa, Deputy President William Ruto’s confidant, told the electoral agency to ignore Raila, saying he has no basis to lecture IEBC on the cost of an election.

“By law, it is the IEBC which has the responsibility of giving Kenya accurate information on this referendum. They (IEBC) should ignore Raila Odinga,” Barasa said.

“If they require Sh14 billion we have to accept that is what they need. It was good they said that, so we decide as a country whether we have that money or not in terms of the priorities that we have.”

Kilifi North MP Owen Baya, a member of Raila’s ODM party, also appeared to differ with his party leader on referendum cost, saying IEBC has the final say on the matter.

Baya told the Star that nobody should question IEBC’s Sh14 billion when the country spent almost Sh20 billion on the BBI task force.

“In the first phase, BBI team spent Sh10 billion and in the validation they were given the same amount. So when IEBC tells you they want Sh14 billion to run a referendum for the whole country, I think they are justified,” Baya said.

“People should know that when they start these things just because of personal political power, then you want to push the whole country to spend Sh14 billion because you want an opportunity to get into power, I think that is insincere,” he said.

However, Mumias East MP Benjamin Washiali, another DP Ruto’s ally, read mischief in the IEBC’s figures, saying the commission must be up to something fishy given the BBI is calling for its overhaul.

“For a referendum that will remove them? They can even put it at Sh20 billion because BBI is talking about commissioners who will be appointed by the parties.”