HE WON AGAINST RUTO

In 2013, a court declared DP Ruto's acquisition of the land irregular, fraudulent and illegal. 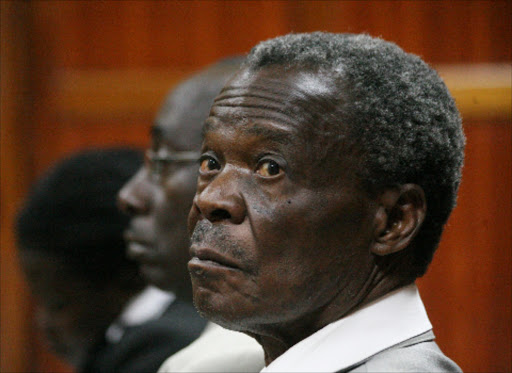 Adrian Muteshi knew a lot of sorrow from post-election violence right from the return of multiparty politics in 1992.

He spent the last 28 years of his life fighting to regain possession of his 100 acres in Eldoret, which he had lost due to post-election violence.

He can finally rest after he died on Tuesday. The accomplished human resource practitioner from Malinya, Ikolomani, in Kakamega county was aged 86.

He is survived by his wife Maria Wikunza, six children and five grandchildren.

In 1992, at the height of clashes following the first multiparty elections, his sprawling piece that consisted of five parcels in Kaptabe scheme in Turbo West of Uasin Gishu was invaded. Gangs stole his farm tools and drove away his livestock.

None of his workers was attacked. He also survived and remained in possession of the farm.

After the disputed election that heralded bloody violence, another band of encroachers forced their way into his farm threatening death. Muteshi was displaced. He became an IDP.

This time, they drove away his dairy cattle, sheep and goats and took away his tractors and farm tools. All his workers were chased away.

His efforts to regain possession of the land were thwarted as his family and workers were under constant threat of death during the violence.

All the while, he sought help from the government but all was in vain.

After two years of futile attempts, Muteshi learnt in 2009 that his land had a new owner, Deputy President William Ruto. He rushed to court to regain possession. At the time, Ruto was the area (Eldoret North) MP and Minister for Higher Education.

One Dorothy Jemutai Yator whom Muteshi listed as the fourth defendant in the case had the land transferred to her on August 20, 2007 before dividing it in November of the same year and selling it to Ruto.

It is not clear whether Ruto was aware of the dealings and the violent manner in which Muteshi was uprooted from the land he acquired in 1968.

In his defense in court, Ruto argued that he was an innocent buyer of the land in “a legitimate process having been made aware of the availability of the suit property for sale.”

“He is thus an innocent purchaser for value. That the Ministry of Lands confirmed that property was available for sale,” his defense papers in court read.

However, Justice Rosalia Ougo ruled in Muteshi's favour, annulling all the transactions on the land and ordered the OCS at Turbo police station to evict Ruto from the land.

The 2013 judgement declared Ruto's acquisition of the land irregular, fraudulent and illegal and the court imposed a Sh5 million fine on him for displacing Muteshi.

Post a comment
WATCH: The latest videos from the Star
by GORDON OSEN News Journalist
News
28 October 2020 - 23:00
Read The E-Paper