• So far, over 2.8 million learners in Grade 4, Standard 8 and Form 4 have resumed learning in class

• The reopening was an experiment to inform the way forward for resumption of teaching and learning for the subsequent classes. 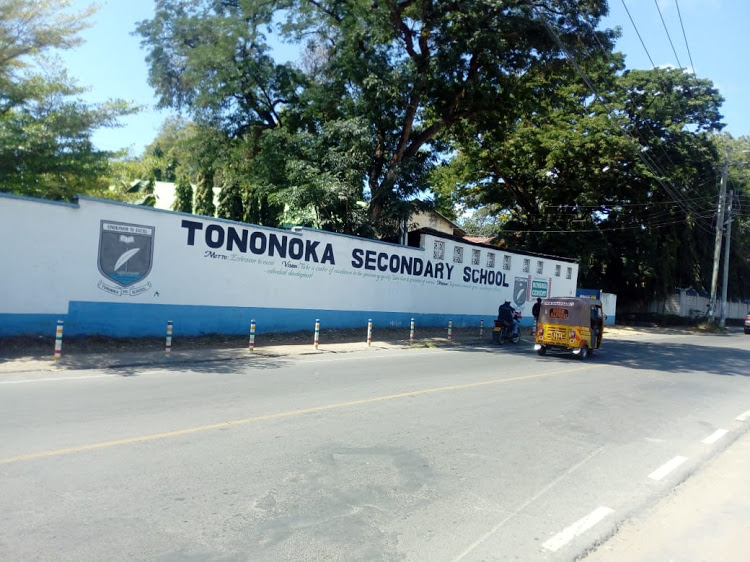 Tononoka Secondary School in Mombasa which was closed on October 21 after teachers tested positive for Covid-19.
Image: JOHN CHESOLI

Stakeholders are mulling a halt to the gradual reopening of schools as a second wave of coronavirus infections appears imminent.

Several schools have reported cases of Covid-19 since reopening last week after seven months of closure due to the pandemic.

All primary and secondary schools reopened on October 12 for learners in Grade 4, Standard 8 and Form 4. The three classes account for 2.8 million learners.

Their resumption of classes was expected to inform how learning would be rolled out to include all other learners.

But barely two weeks into the reopening, several institutions are reporting cases among students and teachers.

On Wednesday, learning in two secondary schools in Mombasa was suspended after 15 teachers tested positive for Covid-19.

Samples from teachers at Star of the Sea Secondary School were also taken after suspected cases were reported.

Both the Star of the Sea Secondary and Tononoka secondary schools have been closed. Learning however went on at Mama Ngina High School despite the cases.

“We could be having several cases from Star of the Sea Secondary School but for now, the samples are still being analysed. We should have the results soon,” Kitiyo said on Wednesday.

The government has placed a caveat on reporting of Covid-19 cases in schools, a directive that may not paint the true picture of the contagion in learning institutions.

Stakeholders are of the view that the surge in infections should not push schools to be closed again. They want a workable plan to ensure the continuity of teaching and learning.

But they want brakes slammed on subsequent recall to class of learners in grades that have so far not reopened.

Sources within the education circles said that further reopening of other classes might accelerate infections, potentially raising the number of children with severe symptoms and causing community spread of the virus.

While children are not immune to Covid-19, they are less vulnerable than adults according to evidence by the World Health Organization.

However, a greater risk lies in the possibility of the children passing the virus to adults whom they often interact with both in and out of school.

Kahi who also sat in the committee that recommended the reopening of schools says the surge in infections means it is no longer safe for a continuation of gradual reopening.

“Let those in school remain in school for now. Schools should work to ensure they are protected as teaching and learning continues,” Kahi said.

He said recalling the other learners will compromise the safety of those who are already in school, especially in boarding schools.

The post-Covid-19 education committee also recommended that schools close on a case by case basis should they register a surge in virus infections.

This option, Kahi argues, will prevent a total disruption of the education system.

Kenya Parents Association chairman Nicholas Maiyo called on the government to roll out mass testing in schools to help eliminate fears and paint the real picture of infections in the institutions.

Last week, the government announced it would start random testing of learners and teachers.

Patrick Amoth, the acting director of public health, said the ministry would embark on random testing in schools to establish if there is a spike in new infections.

In his interactive segment on Twitter, Amoth said the government has already put up a surveillance system to monitor cases of Covid-19 in schools.

“The decision to reopen schools in phases was a delicate choice based on surveillance which will continue while schools are open,” Amoth said.

He said special attention had been given to teachers, students and staff with pre-existing conditions.

Post a comment
WATCH: The latest videos from the Star
by LEWIS NYAUNDI Education Reporter
News
22 October 2020 - 06:22
Read The E-Paper