How Executive, Parliament will change if BBI report is passed

"Cabinet Ministers may be appointed from among members of the National Assembly."

• If the report is passed, the Executive will be expanded with an aim of creating the  Prime Minister's office who will have executive powers.

• In the report, the team proposes that a remodeling of the Parliamentary system is done by bringing the Government back into the House. 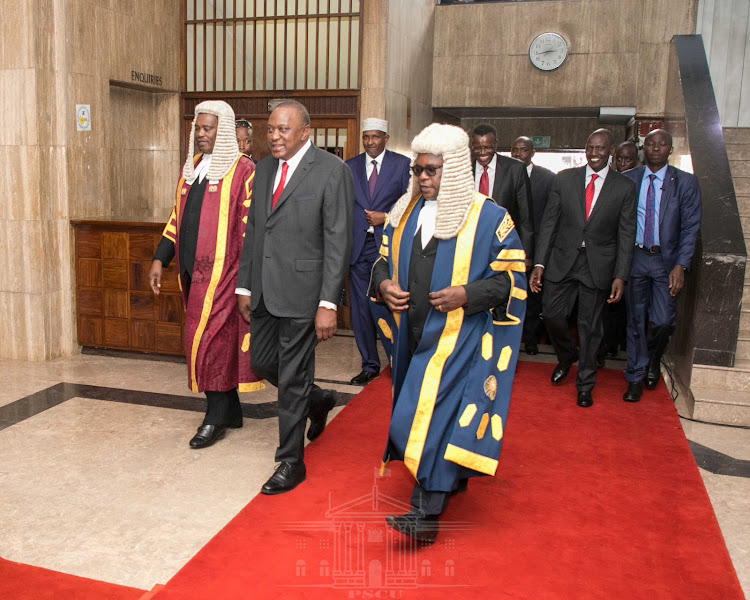 President Uhuru Kenyatta when he arrived at Parliament Buildings to deliver the State of the Nation address on April 4, 2019.
Image: PSCU

The BBI report that has left Kenyans and politicians wagging their tongues was finally released on Wednesday.

The report was handed over to the President alongside his Handshake partner ODM Raila Odinga in a colourful ceremony at the Kisii State Lodge.

Before its release, politicians claimed that the report was meant to change the fortune of others by giving or creating positions in the government ahead of the 2022 general elections.

But what exactly does the report say in regards to the Executive and Parliament?

If the report is passed, the Executive will be expanded with an aim of creating the  Prime Minister's office who will have executive powers.

In the report, the team proposes that a remodeling of the Parliamentary system is done by bringing the Government back into the House.

This includes the Prime Minister, Deputy Prime Ministers, Cabinet Ministers, the Attorney-General, and the Leader of the Official Opposition, being the person who was the runner-up in the Presidential election.

This is different from what we have right now with the President being the Head of State deputized by his deputy.

The report further notes that the expansion is important in order to promote greater inclusivity and mitigate the drawbacks of the winner-take-all electoral formula.

"This recommendation, therefore, proposes the introduction of the Office of the Prime Minister and two Deputy Prime Ministers," the report read.

"It also provides that Cabinet Ministers may be appointed from among members of the National Assembly."

The Committee made this recommendation cognizant of the provisions of Article 77(1) of the Constitution of Kenya which bars state officers from receiving emoluments for more than one role.

This would mean that there would be a President, Deputy President, Prime Minister, two deputy PM, and Cabinet Ministers forming the National Executive.

The proposal is aimed at satisfying President Uhuru Kenyatta's desire for inclusivity that informed the handshake with ODM leader Raila Odinga back in March 2018.

Raila has been insisting that the Executive should be structured in a manner similar to the Bomas Draft proposal.

The Bomas draft had proposed the office of the President who is the Head of State, Commander in Chief, and Chairperson of the National Security Council.

According to the report, rather than retain the current Presidential system, a majority of Kenyans supported the adoption of a hybrid between the Presidential and Parliamentary systems.

They supported the BBI Report’s recommendation for a National Executive.

They also rooted for the positions of two Deputy Prime Ministers.

"Stakeholders submitted that the new executive structure, being more inclusive, will not generate the same bitterness and tension as we see when the fight is for the position of the President," it read.

The report noted that the proposed amendments seek to enhance the transparency and fairness of representation in the electoral system.

ROthers include reforming the management structure of the Independent Elections and Boundaries Commission, promote electoral competition based on ideas, values, and our shared humanity rather than the common-enemy identity politics that have defined our electoral cycles to date.