LSK distances itself from attempts to kick out CJ Maraga

•Havi said the position taken by Njeru and Mercy Deche, the society’s two representatives to JSC is manifestly unlawful and unconstitutional.

•He said the society cannot explain why the two commissioners are determined to pursue a cause whose results will be imperiled and dent the credibility of the commission. 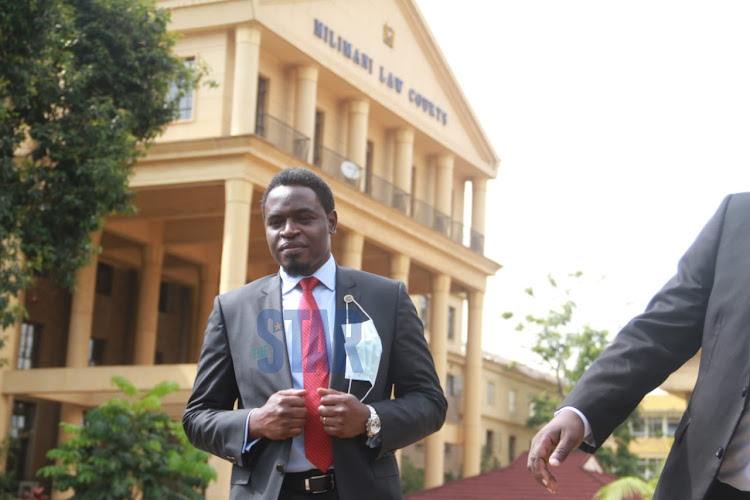 The Law Society of Kenya through its president Nelson Havi has said it will take appropriate legal action against any intentions to proceed with the 'unlawful' bid to kick out Chief Justice David Maraga.

Havi on Friday responded to Macharia Njeru, LSK representative at the JSC, who accused Maraga of frustrating his succession as President of the Supreme Court.

While laying bare the protracted battles in the succession debacle, Njeru cited external and internal forces working with the CJ to derail the process of determining the next Chief Justice.

Maraga is due to proceed on terminal leave on December 15 ahead of his retirement on January 12, 2021.

Citing a botched meeting which was slated for Friday, Njeru said there are forces hell-bent on frustrating a seamless transition at the Supreme Court helm.

He accused the CJ, Deputy Chief Justice Philomena Mwilu, and Justice Mohamed Warsame of opposing the commencement of the recruitment process.

Maraga reportedly canceled the meeting, which was settled on after a stormy session on September 30 when the JSC sub-committee steering the recruitment issued its report.

“After lengthy deliberations of over three hours, the Chief Justice asked for an adjournment to October 16 (today) to allow for consensus other than a vote to decide the crucial process,” Njeru said.

But Havi said the position taken by Njeru and Mercy Deche, the society’s two representatives to JSC is manifestly unlawful and unconstitutional.

According to Havi, the society cannot explain why the two commissioners are determined to pursue a cause whose results will be imperiled and dent the credibility of the commission.

Havi said certain individuals in the government are not happy with the manner in which Maraga has stood firm in the defence of the rule of law and constitutionalism in the country.

"The society, therefore, dissociates itself from the position taken by Macharia Njeru and Mercy Deche. The state capture of the Judiciary and the JSC cannot be executed through representatives of the society...,” Havi said.

He added, “The society will as and when any intention to proceed with this unlawful scheme is sought to be implemented take appropriate legal action to remedy the same”.

Havi said in the meantime, the society will consider whether to retain the two commissioners as its representatives at the JSC.

“There may be need for the society to initiate the recall of the two commissioners now that it is evident that they do not serve the interests of the society or the Kenyan public,” he said.

Havi said the recruitment of the CJ and the deputy CJ is regulated by Section 30 of the Judicial Service Act.

He said Section 3 of the First Schedule to the Act requires that recruitment of the CJ and the deputy be commenced only after a vacancy occurs in the two offices.

He said this was the case when Justice Rtd Willy Mutunga was replaced.

“We are aware of attempts to amend the law with a myopic intention targeting Maraga and Mwilu who appear to have been shackled with highest blame for annulling the 2017 presidential election,’ Havi said.

He said it is unimaginable that its representatives at JSC have been roped into the illegal enterprise intended to subvert the constitution while interfering with the independence of the Judiciary.

Maraga is due to proceed on terminal leave on December 15.
News
1 year ago
by PATRICK VIDIJA Investigative Journalist
News
16 October 2020 - 17:28