He says a wheelbarrow in the hands of a youth in an urban centre is a waste. 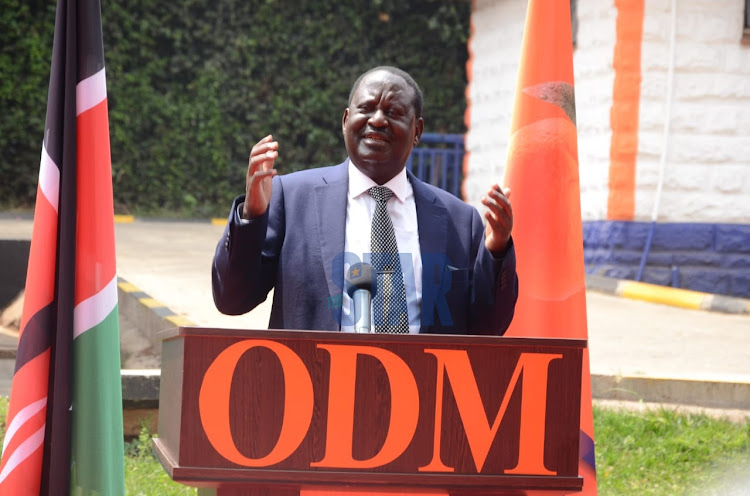 The political war of words between ODM leader Raila Odinga and DP William Ruto intensified on Thursday with Raila attacking the hustler movement as misleading and having no solution to challenges facing  the youth.

Raila said a wheelbarrow in the hands of a youth in an urban centre is a waste and offers no solution to the runaway unemployment which has affected the majority of the youth population in the country.

“Wheelbarrow unapatia kijana na hujamuonyesha pa kujenga. Kijana anaishi mtaani yeye sio mwanakandarasi, atafanya nini na wheelbarrow? [You give youths wheelbarrows and you don’t give them job. Youths in the estate are doing what with wheelbarrows and they are not contractors?], he said.

He said Ruto was a masquerader as those who can liberate the country are known. Raila cautioned the youth against "blindly" joining Ruto’s hustler wave.

Raila, who spoke at the ODM Women's League delegates meeting at Kitengela, likened DP Ruto to a wolf hiding in sheep’s skin.

“We know who the liberators of this country are. For Ruto to claim he will liberate the youth from poverty by giving them wheelbarrows without showing them the work they will do, is quite misleading,” he said.

He added, “He is a hypocrite out to hoodwink the youth into following him blindly. About 75 per cent of Kenyans are youth under 35 years of age, and these are the people the hustler nation is targeting. It will be disastrous for them to join his bandwagon”.

The former premier called on the youths to support the Building Bridges Initiative as it offers lasting solutions to their problems.

“This is where the real change to better Kenya and its political space, economy, and shared leadership is. The economy of this country is dwindling because the cooks are few and those eating the cake are many,” he said.

“Those opposing the BBI will be forced to swallow their pride because the document has the support of the majority of Kenyans. We know those opposing it, and yet calling themselves liberators. Liberators of what?”

He warned religious leaders against offering their platforms for cleansing corruption and blood money.

“Corruption must end. We know those who continue to misuse public funds. We know them. Our churches and mosques should not allow themselves to be used as a dobby to cleanse corruption and blood money,” he said.