•The MPs said Inspector General of Police Hillary Mutyambai should apologise to the church.

•Two people were killed in the chaos on Sunday. 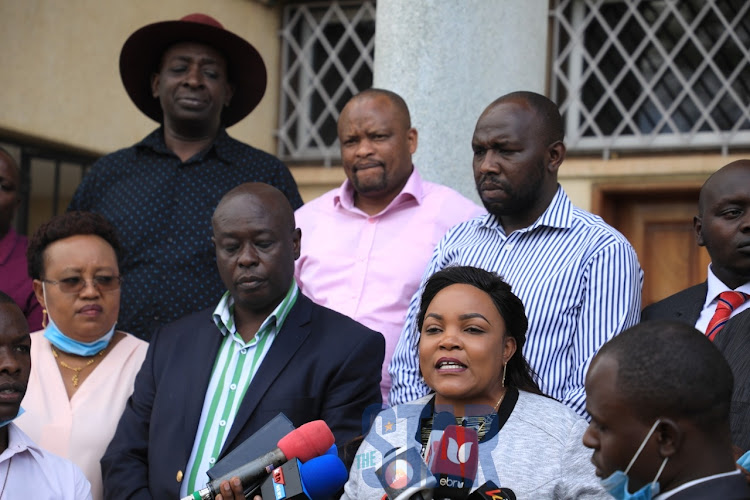 A group of legislators allied to Deputy President William Ruto has said the violence witnessed at Kenol, Murang'a county, on Sunday was 'state-sponsored'.

Addressing a press conference at Parliament Buildings, they said Inspector General of Police Hillary Mutyambai should apologise to the church.

Two people were killed in the chaos on Sunday.

The legislators said Sunday’s incident is part of a "consistent scheme to violently balkanise the country into a primitive ethnic domain".

"It is obvious that they want to create a narrative that absolves them from their constitutional and legal responsibility. Those who planned and funded the violence are known and are obviously under the protection of police and their masters in the Ministry of Interior," they said.

The group also claimed that the Ministry of Interior is in the process of executing execute an overt campaign to sabotage the DP.

"It is tragic that a ministry led by Kenya's most educated civil servants should descend into the arena of active political contestation, and do so in the ways that contradict and undermine ministry's mandate."

The team has also said that the church leaders which hosted the DP were intimidated and asked to cancel the event.

They have further blamed the police for allowing the buses to ferry the goons from different part of the country all the way to Murang'a.

"The police condoned the ferrying of hired goons by the busloads and did nothing as wrecked havoc among the community."

Following the incident, the IG summoned Alice Wahome as well as the people who might have contributed to the witnessed violence.

Two PSV saccos which were purported to have transported goons to the area have already been summoned by the NTSA director-general to shade more light on the same.

The officials of Neo Kenya Mpya Commuters Limited and Joy Kenya Services Limited are to answer allegations that their busses were hired to ferry goons who caused chaos in Murang'a.

The NTSA boss said that the summon is per the implementation of the PSV Regulations, 2014, and in consultation with the Inspector General of Police.

Commenting on the same, ODM party leader Raila Odinga has urged political leaders to stop early campaigns as he condemned the chaos that was witnessed in Muranga county on Sunday.

Raila appealed to leaders to acknowledge that systemic violence has plagued Kenya for far too long and all Kenyans need to commit to working together to confront and end it.

"Let’s renounce the politics of violence and militarization of our youth as a mean of achieving power," he said.

ODM leader said the violence being witnessed should be a serious cause for concern.
News
7 months ago

Buses belonging to the two saccos alleged to have ferried goons to Kenol.
News
7 months ago
by KEVIN CHERUIYOT Online Journalist
News
05 October 2020 - 16:50