Uhuru will declare stand on Ruto when elections come

•"I have always maintained very clearly that we have an agenda as a government that we want to complete. This is not the time to start campaigning," Uhuru said.

•Uhuru said his move to reconcile with ODM party Raila Odinga was not aimed at weakening his deputy despite numerous claims. 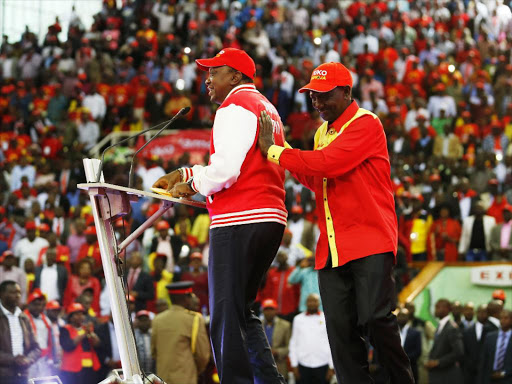 Uhuru and Ruto at the merger to form Jubilee Party
Image: FILE

President Uhuru Kenyatta has said he will make a stand on whether to support his deputy William Ruto's presidential bid in 2022.

In an interview with France24 on Thursday, the president said the elections are two years away hence it is not yet time for campaigns.

"I have always maintained very clearly that we have an agenda as a government that we want to complete. This is not the time to start campaigning," he said.

"I have also made very clear that my intention is to do everything I can to bring the people of Kenya together to ensure that the next elections will not be an election that shall lead to a potential crisis of ethnicity. That is why I reached out to the opposition".

Uhuru said his move to reconcile with ODM party Raila Odinga was not aimed at weakening his deputy despite numerous claims.

"There are some maybe who feel that as a result of me reaching out to the opposition was meant to sideline William Ruto. But there is nothing more to the contrary," he said.

There has been suspicion that recent attacks on Ruto by some Jubilee Party officials and Cabinet Secretaries had the blessings of Uhuru.

Just a month ago, Ruto told the Star in an interview that he was ready to leave Jubilee in the future if things do not work out.

The DP however said that there were people who had an aim of pushing him to fight with Uhuru but had failed.

"These people pretend that they are speaking for the President. The Uhuru Kenyatta that I know cannot be that petty. How can Uhuru send people to insult Ruto?" the DP said.

Beginning of the end: Anticipated Uhuru-Ruto fallout is finally here

Since last year, the relationship between has been anything but cordial.
Siasa
2 years ago

Jubilee has been hijacked by busybodies like Murathe - Ruto

"The party has been hijacked by busybodies and conmen and brokers like Murathe" - DP.
News
1 year ago

I cannot support Uhuru blindly not to question things - Ruto

DP says that Jubilee members who are going against the party would soon be kicked out.
News
1 year ago
by SHARON MAOMBO Online Journalist
News
01 October 2020 - 21:50