•The Sh3.6 billion project was meant to give protection to water towers, improve livelihoods of millions 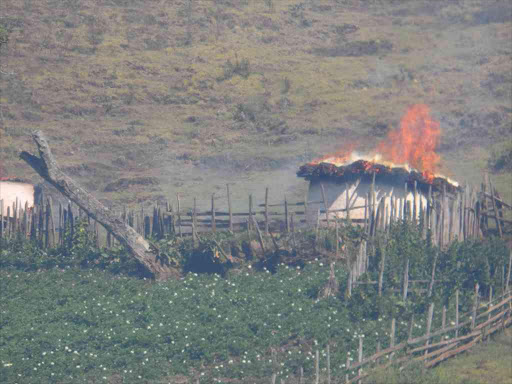 A fire at Embobut forest from where members of the indigenous Sengwer community were evicted.

Launched in 2016, the water towers protection and climate change mitigation and adaptation programme was aimed at eradicating poverty.

This was through enhancing the productivity of ecosystem services in Mount Elgon and Cherangany and its ecosystem covering 11 counties.

On Friday, the EU announced the decision following inquiries from the Star.

“Following the lapsing of a contractual deadline of the EU WaTER project, the Water Towers programme will now be closed,” EU said in response to our inquiries.

The programme was a partnership with the Government of Kenya.

Lake Victoria and Turkana basins were also included under the six-year programme (2014-2020), whose total support was Sh3.6 billion.

However, the programme encountered challenges following the eviction of forest dwellers and allegations of human rights abuses against the indigenous communities living in the project area.

This resulted in the EU’s suspension of the programme in January 2018.

“Over the last two and a half years, the EU delegation has worked in cooperation with various stakeholders, including the National and County governments, Kenyan National Commission for Human Rights, the Task Force on the Ogiek and local communities living in the project area to find a solution to the human rights and conservation issues. The efforts in particular of the Environment Ministry led to considerable advances towards the resolution of the contentious issues particularly in the last few months,” EU said.

However, EU said, much of this had not been formalised before the contracting deadline.

“Three extensions to the deadline had already been granted earlier in a bid to resolve the contending issues. Following EU internal procedures, the contracting deadline of 24th September 2020 cannot be extended further.”

The EU said despite the closure, its relationship with Kenya remains vibrant.

“Forward looking, the European Union is very keen in reengaging with Kenya on environmental protection and climate resilience building under the Green Deal Initiative in the new programming period,” EU said.

It said the new programme could offer an opportunity to capitalise on the work done under the Water Towers programme and build a new freshly designed initiative that should learn from the past experiences.

Environment PS Dr Chris Kiptoo said the government tried to save the project.

Kiptoo said when he joined the ministry, a taskforce had been constituted to address the issue of Ogiek.

This was after an Arusha court made a ruling in favour of Ogiek community.

“I also found out that along the way when the issue of Sengwer came, the CS decided to expand the terms of reference of the Ogiek taskforce to focus on specific issue of Embobut,” Kiptoo said.

The PS said the taskforce had finalised the report and handed it over to the ministry.

Kiptoo said the ministry prepared a Cabinet memo for the Cabinet to decide how those recommendations can be implemented.

He said the report will be given to the public after the approval of the Cabinet. “That process of Cabinet approval is ongoing,” he said.

Kiptoo said a block will be given to Ogiek in the fulfilment of courts decision.

However, the matter will have to go through the Cabinet. “We have formed a team to work on the details so that the matter comes to the cabinet for approval,” Kiptoo said.

The PS said people in Embobut and Kerio Valley are living in ecologically sensitive areas.

“So we are asking that they be resettled. That is what we have asked Cabinet to consider.”

Kiptoo said a decision will also have to be made in Embobut as they are in the forest.

“The only thing we were uncomfortable with is for the Sengwer to try and tie the EU funds on that. For us, we do not operate on whims of EU,” Kiptoo said.

“I actually thank Ambassador Mordue, he has been exceptional in being proactive in trying to save the situation,” Kiptoo said adding that they can’t dictate terms to EU.

Kiptoo said he had recommended during the meeting with Council of Governors, EU ambassador and Treasury CS that money to counties that were not affected should be released.

“Now since we are dealing with the issue of Ogiek and Sengwer in general, they should allow us to move at the phase of the Cabinet. Since they have seen that demonstrable evidence, they (EU) should say let the counties benefit.”

Kiptoo said the money meant for KFS and Kefri be reallocated to the counties.

He said there is need to balance the issue of human settlement together with environmental conservation.

Bloc says Kenya must before September 24, or it will lose Sh3.6 billion funding.
News
1 year ago