• The market was constructed by both Nandi and Kakamega counties to encourage the Luhya and Nandi communities to engage in trade and integrate them.

• The market was as a result of in-depth consultations between the counties and national government on way to establish a lasting solution in the volatile area. 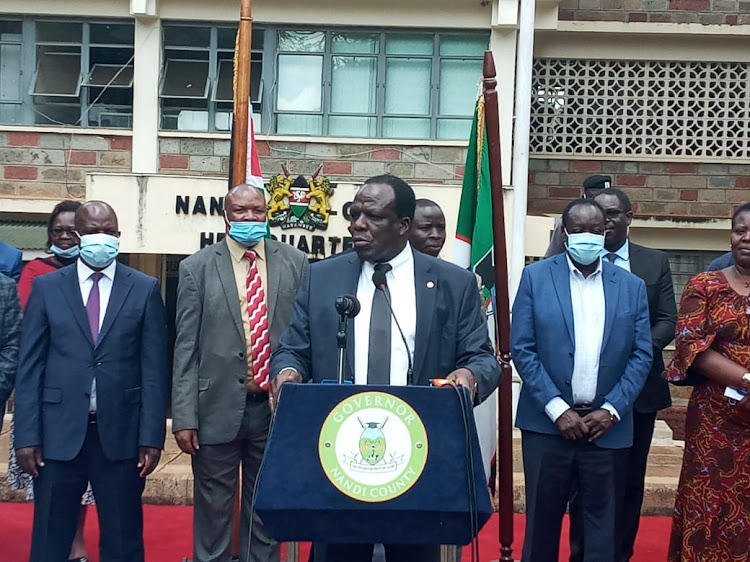 Five governors from the Lake Region Economic Bloc have signed a peace accord binding communities from their counties from engaging in violence.

The leaders want residents from respective counties to be encouraged to engage more in economic and social affairs among themselves to discourage the breaking of the law.

The leaders were at Tabolwa/Kamung’ei tribal clashes hotspot along the Nandi/Kakamega County’s border to sign the accord to stamp out perennial animosity in the area.

Also in attendance were members of the National Assembly Committee on Integration and Equal Opportunities.

The governors also presided over the commissioning of the “Kamung’ei  Soko la Amani” (Kamung’ei Peace market) cattle auction along the border.

They spoke on Monday in Kapsabet, Nandi county.

The market was constructed by both Nandi and Kakamega counties to encourage the Luhya and Nandi communities to engage in trade and integrate them. 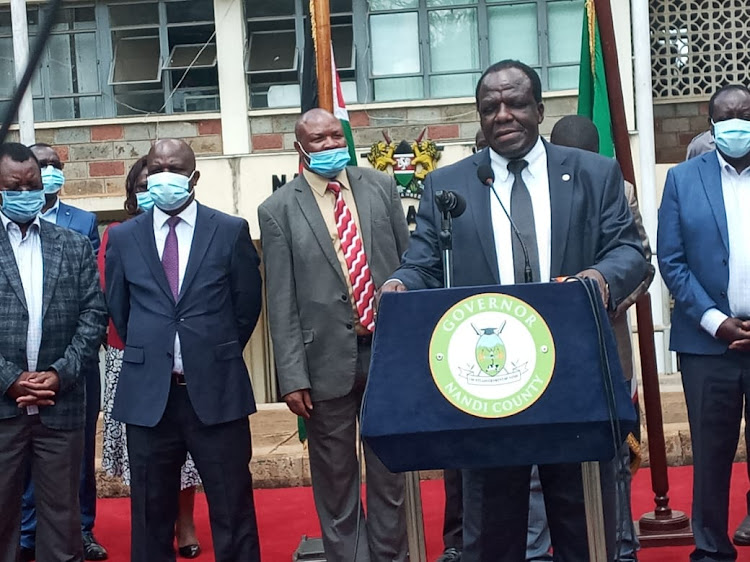 COG chairman Wyclife Oparanya speaking in Kapsabet -Nandi county when he led 5 governors to preside over the signing of a peace accord between Nandi and Luhya elders to finding a lasting peace along Nandi/kakamega border.
Image: Barry Salil

The market was as a result of in-depth consultations between the counties and national government on way to establish a lasting solution in the volatile area.

Speaking in Kapsabet ahead of the ceremony, Oparanya who doubles up as chairman of the Council of Governors and Lake Region Economic Bloc said they wanted the residents to focus on bigger opportunities available.

Oparanya who was hosted by Sang said the animosities existed along the Kisumu/Vihiga border over Maseno town, Kericho/Kisumu over the borders in Muhoroni, Nandi/Vihiga over Kiboswa and Nandi/Kisumu over cattle thefts.

“We must realize that the boundaries are for administrative purposes and not meant to divide the people,” Oparanya said.

Governors were working with political leaders to ensure that no more lives should be lost as a result of border skirmishes that dates back to pre-independence,” Oparanya added.

Sang said he and Prof. Peter Anyang Nyong’o-Kisumu had worked tirelessly to end frequent cattle theft along their common border in Chemase.

“For over two years now, we have neither had any incident of cattle theft or clashes involving our people in Nandi and Kisumu which is attributed to our sober handling of the problems,”  Sang said.

Chepkwony said governors in the LREB were united for peace and economic development because all the counties were cosmopolitan.

“We need one another for economic prosperity and the cardinal and pillar for all these is peace hence the need to promote,” Prof. Chepkwony said.

Kaunya asked Kenyans not to vote to parliament or any leadership positions all those spreading hate and division.