• Duale on Monday said currently there is no mechanism for conducting a general election other than what is contemplated in Art. 101(1).

• The Constitution does not contemplate any other situation when a general election can be held. 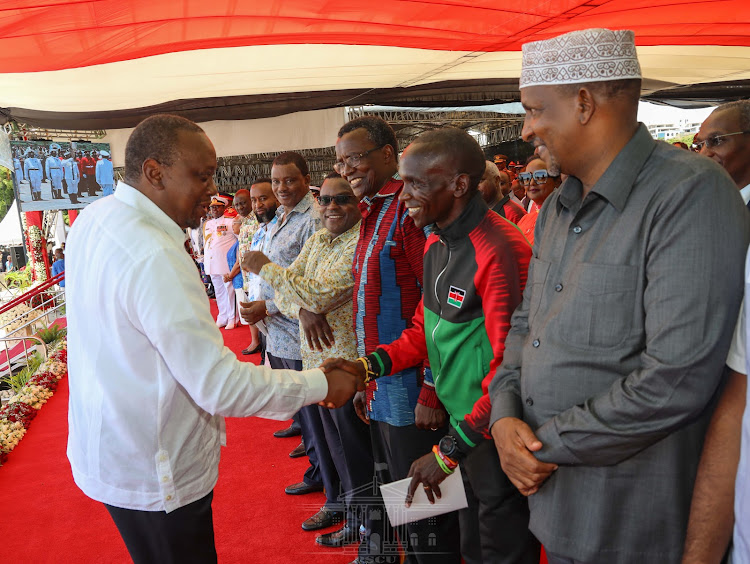 Duale on Monday said currently there is no mechanism for conducting a general election other than what is contemplated in Art. 101(1) of the constitution.

In an advisory dated September 21, Maraga said he was responding following six petitions seeking his advice on the matter.

"The petitions are based on the ground that despite four court orders compelling Parliament to enact the legislation... Parliament has blatantly failed, refused, or neglected to do so...." Maraga said.

The CJ said it was his constitutional duty to advise Uhuru.

'Let us endure pain if we must' - CJ Maraga.
News
7 months ago

The Chief Justice has, pursuant to Art. 261(7) of the Constitution, advised the President to dissolve Parliament on the ground that Parliament has allegedly “blatantly failed, refused and/or neglected” to enact legislation required to implement the two-thirds gender rule. In my view, the dissolution would be a serious affront to the will and sovereignty of the people embodied exercised by Parliament on their behalf," Duale said.

Duale said dissolution would negate the legislative authority conferred on Parliament by the people and would thus deny the people the opportunity to exercise that authority, thus defeating the very purpose why the people ordained the Constitution for themselves.

"The Constitution does not contemplate any other situation when a general election can be held. Consequently, a dissolution of Parliament will lead to a constitutional crisis," he added.

The Garissa Town MP  said whereas there are no timelines prescribed in the Constitution within which the President is required to act, the decision of Chief Justice has thrown in serious questions as listed below.

1. Does the Constitution envisage another form of election other than a general election held on the second Tuesday in August of every fifth year as envisaged under Article 101 of the Constitution?

5. What happens to the revenue allocation process that is yet to be concluded by Parliament if it is dissolved? (F)Who would allocate funds to IEBC to conduct the elections following the dissolution of Parliament?

6. Can the will of the People to elect their representatives democratically under Article 1 of the Constitution be negated by a stroke of the pen of the CJ? (H)Who would pass any election-related laws required to be put in place following the dissolution of Parliament?

Application of foundational principles and values of the rule of law is now the big test.
News
7 months ago

7. Does the advice of the Chief Justice cast doubt on the validity of the decisions and proceedings of Parliament moving forward?

Duale said in his view, it is clear there are issues ensuing from the advisory of the Chief Justice and any person may move to the High Court for interpretation to avert a constitutional crisis.

Earlier on, Speaker of National Assembly Justin Muturi had hit back at Maraga saying Parliament should not be used as a punching bag.

Muturi said it was 'unrealistic' to call for its dissolution for failing to enact the gender law.

"We must not lose sight of the real challenges in implementing this matter and turn Parliament into a punching bag on account of gender parity," he said in a statement on Monday.

He further said, "The clamour for dissolution of the current Parliament on account of failure to enact the two-third gender legislation is at the very least, unrealistic."

"Given that legislators decide through voting in Parliament, this would in essence mean that there are an additional 100 votes of nominated women legislators, yet these legislators are not a direct expression of the will of the people," he said.

Muturi shoots back after Maraga calls for Parliament's dissolution