How counties will share Sh370bn after senators pass revenue formula

Senators unanimously pass the formula after months of standoff

• Tharaka Nithi, Nyamira, Vihiga, Isiolo and Kwale will get least additions to their current allocations. The new formula ensures that no county loses revenue. 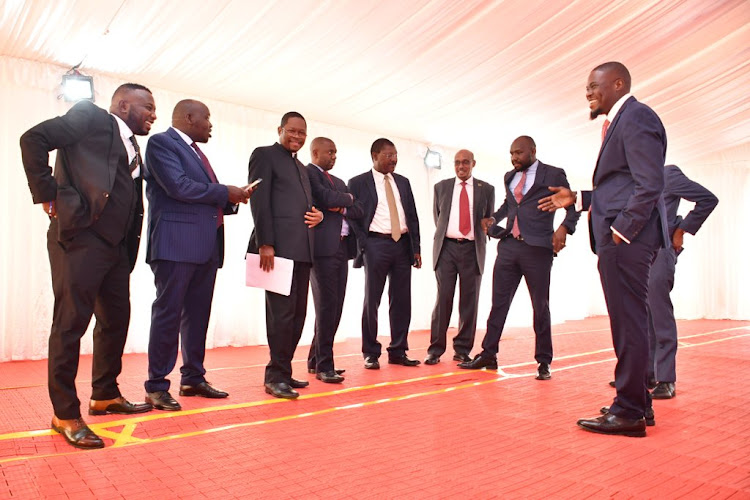 Senators outside the chamber after passing the third basis for revenue sharing on September 17, 2020.

Nairobi, Nakuru, Kiambu and Turkana will get the lion’s share of Sh370 billion set to be allocated to the counties in the next financial year.

After months of standoff characterised by arrests, claims of intimidation, bribery, blackmail and a record 10 adjournments, senators on Thursday struck a deal and voted to approve the third basis for sharing revenue among counties.

All the 41 elected senators (delegations) present in the House voted unanimously to approve the formula in a session that saw factions that have been warring for months close ranks.

None of the counties loses revenue in the approved third basis for revenue sharing.

“This formula brings to rest a long protracted, winding, noisy and messy debate in the House that has now come to an abrupt end,” Bungoma Senator Moses Wetang'ula said. 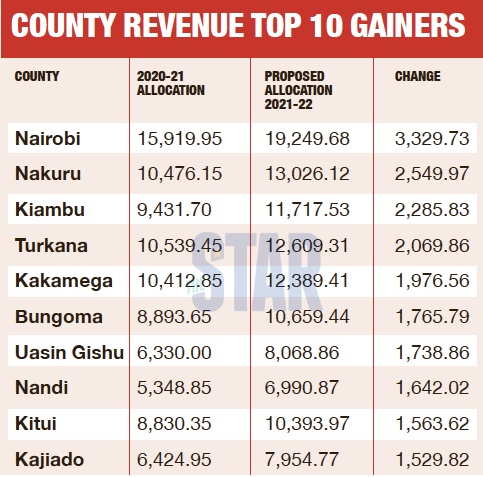 The breakthrough was seemingly jerked by President Uhuru Kenyatta's pledge to increase the equitable shareable revenue by Sh53.5 billion in 2021-22 financial year.

The shutdown of counties by governors and failure by the National Treasury to release at least 50 per cent of the Sh316.5 billion allocated to the counties this fiscal year, also played a role in the resolution of the stalemate.

Governors and Treasury Cabinet Secretary Ukur Yatani have been blaming the senators’ indecisiveness for the cash crisis that has crippled services in the devolved units.

The lawmakers failed in record 10 sittings to approve the third basis for sharing revenue among the counties to allow for the passage of County Allocation of Revenue Bill (CARA) that has stagnated in the House since April, to unlock the disbursement of funds.

Soon after the passage of the formula, the Bill, which had been stuck in the Senate, advanced to second reading and was thereafter passed.

The lawmakers will now approve cash disbursement schedule, which stipulates monthly disbursement to the devolved units before they get the cash.

On Wednesday, Council of Governors chairman Wycliffe Oparanya ordered the shutdown of county services over delays by the Senate to pass the enabling laws to allow the devolved units get the funds.

Tharaka Nithi, Nyamira, Vihiga, Isiolo and Kwale will get the least additions to their allocations in the new formula that ensures no county loses revenue.

Tharaka Nithi will get an additional Sh289.6 million to push its total allocation to Sh4.2 billion.

The formula provides for an eight-parameter formula, with the biggest weight placed on basic share (20 per cent), population (18 per cent), health (17 per cent), poverty level (14 per cent) and agriculture (10 per cent).

The formula scraps fiscal prudence and fiscal efforts as parameters for sharing revenue. The two had been recommended in previous proposals including one fronted by the Commission on Revenue Allocation (CRA).

The changes will be effected in 2021-22 and run until 2020-25 after the senators voted to retain the old formula (one used for the last five years) for the current financial year.

This implies that all the counties will get the same allocation as last year’s. The counties have been allocated Sh316.5 billion in the current year – the same amount they were allocated last year.

The third basis for sharing revenue generated nationally among the 47 counties had split the lawmakers with camps emerging in the House.

‘Team Kenya’,  comprising mainly lawmakers from marginalised and less populous regions of Northeastern, lower Eastern, Coast and parts of Rift Valley and Nyanza, had opposed a formula proposed by the House Finance and Budget Committee which cut the allocation to 18 counties by Sh17 billion.

The formula had been backed by a section of senators calling themselves  One Man, One Shilling. They argued that their counties had been marginalised because of use of wrong population data. Article 217 of the Constitution stipulates that the revenue-sharing formula be reviewed every five years.

However, the Sixth Schedule of the Constitution further provides that the first and second determinations of the basis of the division of revenue among the counties be made at three-year intervals. The last formula was reviewed five years ago.