Move meant to dilute the DP's influence and box him out of the party succession matrix. 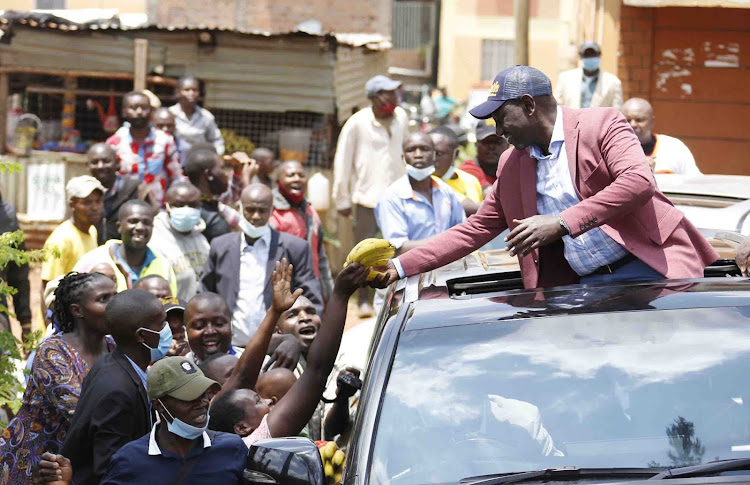 The plan being mooted by the President's close confidants will create four deputy party leader positions to dilute the DP's influence and box him out of the party succession matrix.

The scheme is seen as part of elaborate Machiavellian tactics being employed by the President's men to influence his succession in the ruling party.

Under the proposed line-up, the Star has exclusively established that the deputy party leaders will be bosses of particular regions only.

In a telling move, the party is said to be plotting to have another party leader from South Rift, meaning Ruto will only remain in charge of North Rift.

However, the names of those being considered for the three slots remain under the wraps.

At a historic Kanu delegates' conference on March 12-13 in 1966 at the Limuru Conference Centre, eight vice president positions were created in Kanu to dilute Oginga's position after a falling out with Kenyatta.

To roll out the strategy, Uhuru's allies plan to sponsor amendments to Article 9 (2) of the Jubilee constitution to provide for four deputy party leaders.

They are first relying on Article 4(2) of the party constitution which empowers the National Executive Committee to reorganise the membership of the entity.

“The National Executive Committee shall have the power to create or establish such categories of membership for the advancement of the interests and objectives of the party as circumstances may warrant,” the article reads.

Once the positions are created, they will then be operationalised awaiting ratification by the National Delegates Conference that will nominate the 2022 presidential flag-bearer.

With four centres of power in the party, Uhuru's allies believe that Ruto would be annihilated and his dream for the Jubilee ticket dashed.

Although facing resistance from Uhuru's men, as the sole second in command in the party, Ruto has been technically the automatic 2022 Jubilee presidential flag-bearer.

However, his quest for the party ticket in 2022 could be dimmed through the machinations focusing on bringing on board regional bigwigs to take on Ruto at the primaries.

This is part of the plan B the President's handlers are looking at in case the DP chooses to hang onto the wobbly outfit to bulldoze his nomination as the 2022 presidential flag-bearer.

The Uhuru allies are concerned that the DP could easily outmanoeuvre them to win the Jubilee nomination ticket in case there are no influential heavyweights to challenge him at the primaries.

In May, President Kenyatta took firm control of the party's NEC after he managed to kick out Ruto's allies from leadership positions in Parliament.

Uhuru's successful bid to reconstitute the party's National Management Committee, whose officials are automatic NEC members, elbowed Ruto from the grip on Jubilee.

This means that the President's plan to further vanquish Ruto would smoothly sail through the lean 32-member NEC reconstituted four months ago.

“There is no reason why we can have one deputy party leader. What if he rebels like what our deputy has done? Who would then help the party leader in managing the party affairs?” asked a source aware of the plan to create the four slots.

The official said the three more deputy party leaders will represent strategic regions across the country to build the Jubilee juggernaut ahead of the 2022 polls.

On Tuesday, secretary general Raphael Tuju gave the clearest indication yet that the battle for the 2022 Jubilee presidential ticket would be bruising.

Tuju revealed that Jubilee has no automatic presidential candidate and that Ruto would have to subject himself to nomination and compete with others.

“That primarily does not put into consideration any kind of deal that may have been there with the President. That is not something you can hold anybody to account on,” he said.

The former Rarieda MP added: “There could have been some swearing of sorts among friends but there is no way you can make a party accountable to that and I think the Deputy President is aware of this. I will support him if he wins the nomination."

With the President's men determined to expand the Jubilee structure at the helm to rope in some three more big guns to take on Ruto, the DP's allies are bullish.

Elgeyo Marakwet Senator Kipchumba Murkomen said the plot was nothing new and would not affect the DP's fortunes.

“They can as well split the position of the deputy party leader into 47 deputies if they want but that won't put food on the table for Kenyans,” he said.

The ex-Senate Majority leader likened the move to the Machiavellian tactics  employed by Jomo Kenyatta to cut Vice-President Jaramogi Odinga to size in 1966.

“That is exactly what they did to Jaramogi but they should know that we are in the 21st century and such tactics will boomerang,” he said.

Belgut MP Nelson Koech told the Star the move is a desperate effort by a few elements hell-bent on propping up dictatorship in the ruling party.

“We are not concerned at all. That is perfect as the DP no longer enjoys any powers in government. They can as well continue humiliating him,” he said.

The DP, who has fallen out with the President, has been isolated with his allies saying the President is personally leading a campaign to persecute him.

Ruto said in a recent interview that he would try to sort the mess in Jubilee with the President, but if push came to shove he would seek an alternative vehicle for his 2022 presidential bid.