Ndaragwa MP Jeremiah Kioni says it is time MPs moved on from debate.

•MP says there is no clear path to implementing two-thirds gender law.

•Parliament has been accused of not doing much to implement law. 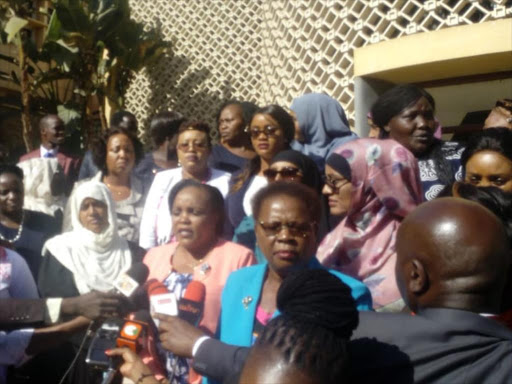 The constitutional provision that not more than two-thirds of the members of elective public bodies shall be of the same gender is not implementable, a lawmaker has said.

The lawmaker pointed out there was no clear way out of the gender disparity “as no one can tamper with Kenyans’ choices at the ballot."

Kioni said it was time MPs agreed that they “have to move on as they (MPs) can’t be in a constitutional moment for the rest of our lives.”

Parliament has five times failed to muster the quorum of 233 members to pass a law it once felt would put the House at risk of dissolution.

The leadership has, however, assured the members that the House cannot be dissolved as sought by two petitioners in a matter before Chief Justice David Maraga.

While responding to attacks on Parliament’s perceived failure, the lawmaker said Article 81(b) – which sets the requirement - does not call upon MPs to enact the two-thirds gender rule.

The CIOC chair said Parliament is only tasked with enacting a law to comply with Article 100 and has bounds when it comes to voters’ choices at the ballot.

The Constitution says MPs shall pass a law to promote the representation of special interest groups – women, youth, persons with disability, marginalised and minorities - in Parliament.

Kioni told a meeting of House leaders that once the law – now before Senate - is implemented, the houses would have done what is expected under Article 81(b).

National Assembly passed the Representation of Special Interest Groups Bill, 2019 which is awaiting concurrence of the Senate.

“We are facilitating the specific groups covered in Article 100 to come into the elective bodies. Ours is to create an environment for them to come.  You can’t take away Kenyans’ right to vote,” the CIOC chairperson said.

In a cautionary notice, the Ndaragwa MP said little can be achieved when the supreme law is amended in an environment such as that of the Building Bridges Initiative (BBI).

“It is not easy to think of amending CoK in a wholesome way as you may lose out on areas that are easy to amend. Kenyans have their own views. You have to be careful with what you put before them,” Kioni said.

He gave the example of mixing issues such as taking Cabinet back to Parliament, which Kenyans have largely agreed on, with an unpopular issue that raises the risk of losing both.

“To amend the Constitution, take one issue and run with it and let Kenyans decide on it. When you bring many issues on board, you will lose those which we could have done like yesterday,” the MP said.

The first BBI report proposed that political parties would be compelled through the Political Parties Act to meet the gender rule.

The proponents argued that this would equalise both genders in political terms, rather than creating a parallel system that creates a sense of tokenism.

Of importance, Kioni observed, is to ensure that the country is not in a permanent constitutional moment.

The CIOC chair maintained that the House has implemented all the provisions of the Fifth Schedule.

“I don’t think there is any aspect of the Constitution Parliament has not implemented. Some amendments are not doable.”

He wants established a committee of Parliament in charge of Chapter 15 commissions, said to be under the grip of the Executive.