Source says he has undergone tests to establish what could be the cause of his pain. 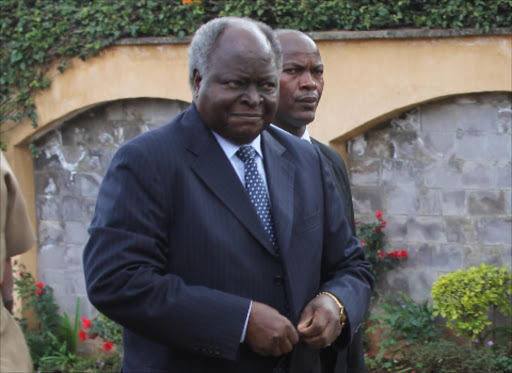 Former President Mwai Kibaki has been admitted to a Nairobi hospital hardly two weeks after he was discharged.

The former head of state is said to have been driven back to The Nairobi Hospital on Monday evening and was admitted to the VIP wing where he is currently receiving treatment.

While there was no one from his family to comment on what is ailing the former President who is credited for a sterling development record during his term, sources within the hospital on Wednesday told the Star that Kibaki was being “treated for a similar condition that had taken him previously”.

“Mzee is around being taken care of by his doctors. He has undergone several tests once again to try to establish what could be the cause of the much pain he is in,” a source at the hospital told the Star.

Last month, the ex-President was admitted to the same city hospital and was treated for “severer pain at the lower abdomen”.

A day after June 28 when the Star published the story of Kibaki being admitted to the hospital, his private secretary Ngari Gituku came out to dispute the 10 days the former head of state stayed in hospital.

Gituku told the Standard newspaper that Kibaki was treated and discharged the same day, adding that it was a routine check-up for the 89-year-old economist.

Officers privy to government security operations told the Star that the former head of state was booked under a code name and the whole floor secured.

This is to guarantee his security at the hospital.

“Only a top nurse, specific doctor(s) and his personal doctor are allowed to attend to him,” our source said.

“Even his details are not registered at the hospital.”

He has maintained a low profile after he exited the office after serving Kenya for two terms.

Kibaki was in London in September last year for a series of medical check-ups following a knee problem that was rectified.

That was his third trip abroad for treatment after he was flown to the United Kingdom in 2002 following an accident in Machakos during the general election campaigns.

Kibaki won the elections the same year and was sworn in on December 30.

Kibaki was also admitted to The Nairobi Hospital on January 20, 2004 following pain in his leg.

The former president was flown to South Africa in 2016 where he successfully underwent treatment.