•Kenya and Tanzania have differed on Covid-19 response strategies. 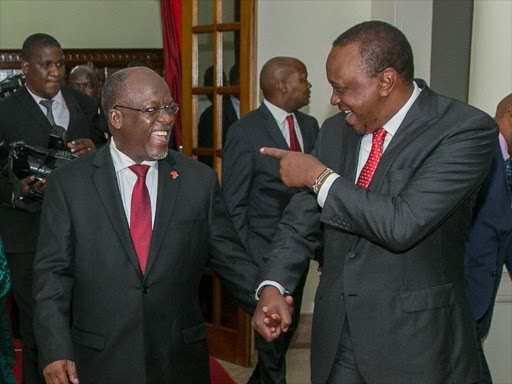 The Ministry of Foreign Affairs on Tuesday denied claims that the Kenyan delegation to President Benjamin Mkapa’s funeral was turned back mid-air by the Tanzanian authorities.

The plane carrying West Pokot Senator Samuel Poghisio, who is the Senate Majority leader, returned to Nairobi as soon as it reached Monduli in Tanzania, The Citizen reported.

Introducing guests at the funeral service in Uhuru Stadium, Kabudi said they had received information that the plane carrying Poghisio had been forced to turn mid-air because of bad weather.

“We were expected to have with us the special envoy representing President Uhuru Kenyatta, Senator Samuel Losuron Poghisio… but we have received information that his plane was forced to turn mid-air in Monduli. The information we have is that the plane is expected to land safely in Nairobi,” Kabudi said.

Sought for a comment, the Foreign Affairs ministry agreed with Tanzanian authorities' version of events.

“It was a technical problem. Kenya was, therefore, represented by High Commissioner Dan Kazungu. He is at the funeral service,” head of public communications Jane Kariuki said on the phone.

Poghisio was yet to respond to the Star's queries via SMS on the claims by press time.

The claims of possible retaliation by Tanzania were linked to comments made by President Uhuru Kenyatta on Monday.

Speaking during his 10th Presidential Address on Covid-19, President Kenyatta told Kenyans not to think countries that are not releasing their coronavirus data are doing any better in handling the pandemic.

“Let’s not compare ourselves and say some places don’t have the virus. Why do we have it, and they don’t? Let me remind Kenyans, we live in a democracy where there is media freedom. As a state, we don’t have the power to hide anything. Whatever happens, we tell you.”

“There are others who have that power. But we are proud of the fact that we are a democracy and are able to tell each other the truth and face the reality instead of sweeping the truth under the carpet and have our citizens suffer quietly,” Uhuru said.

Uhuru fell short of naming Tanzania, which has been accused of siting on Covid-19 data and restricting news reporting about the pandemic.

Tanzania last announced its Covid-19 numbers on April 29, when it put the cases at 480 and 21 deaths.

Africa Centres for Disease Control and Prevention puts the numbers at 509 confirmed cases and 21 deaths.

The US Embassy in Tanzania has warned that the risk of contracting coronavirus in Dar es Salaam, a major city and commercial port, and other regions is extremely high because the government has not released Covid-19 data in several weeks.

Tanzania has reopened the economy, and not much information about the status of health is coming out of the country.

Authorities have shut down some media outlets for reporting on Covid-19.

The latest to be shut down was Kwanza TV, which was closed on July 9, days after being accused of republishing a health alert from the US Embassy on the high risk of contracting Covid-19 in the country.

On June 15, the private-owned Mawio paper was banned for 24 months, with the government suspending its print edition and online platforms.

The standoff escalated when Uhuru announced the closure of the Kenya-Tanzania border following increased cases of Covid-19 by drivers from the neighbouring country.

President John Magufuli for the second time on July 20 declared Tanzania Covid-free because of prayers.